On a marine wildlife cruise in Alaska recently I got to touch a sea otter pelt– with a million hairs per square inch it was so luxuriously soft my knees almost buckled with pleasure. That delectable fur almost did the otter in a century ago when the market for hats and coats went berserk.

A new study found that these critters are not only super-cuddly, they also play an outsized role in sucking up carbon from the atmosphere and storing it safely away in the sea.

To be clear, the otters don’t suck and store that biocarbon themselves.  They do it by chowing down on sea urchins, forcing them to hide in rock crevices instead of feasting freely and voraciously on undersea forests of kelp.  It is these kelp forests which pull in carbon dioxide as they grow, helping us humans address our ‘biocarbon imperative’.

In a study published in Frontiers in Ecology and Environment, scientists at the University of California, Santa Cruz compared various kelp beds in Southwest Alaska with and without healthy sea otters populations. They found without the otters, the kelp forests held on average 8 to 14 grams of carbon per square meter.  But with otters the biocarbon fix was 101 to 180 grams!

"Within the coastal ecosystems, otters have a really huge effect in terms of sequestering carbon," James Estes, Professor of Ecology and Evolutionary Biology, and one of the lead authors the study, told ClimateWire.  "If you were to measure the productivity, the amount of CO2 sucked out of the atmosphere, it's actually really high in kelp forest systems.”

The authors even ran a calculation to figure out how much the biocarbon benefit of reintroducing and increasing otter populations might be worth on the European Carbon Exchange -- $205-408 million! "An alluring idea," they conclude: sell the carbon indirectly sequestered by the sea otter protected kelp forest "as a way to pay for their reintroduction and management or to compensate losses to shell fisheries from sea otter predation." 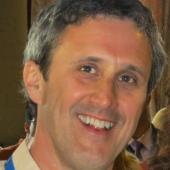