Melting the polar ice cap and drilling for oil where the ice used to be would be crazy and wrong, even if we needed the oil.

We’re obviously not about to quit using oil right away. But Arctic drilling isn’t about to produce oil right away either; it’s too remote and expensive, and we’re awash in cheap oil. So how much do we need? For how long? At what cost? And how fast will we develop better alternatives that free us from oil dependence? These questions have right and wrong answers – answers that either give our kids a fighting chance for a healthy future, or toast them. And once we answer these questions, Arctic drilling makes no kind of sense.

Why is Shell moving ahead with drilling, when other major players have abandoned Arctic exploration? With billions squandered already, Shell seems to think it's in too deep to get out.

First, let’s dispense with the silly strawman. (For Pete’s sake,) Shell protesters are NOT, as former Republican Party Chairman Chris Vance said on KUOW’s Week in Review, suggesting that we “abandon all coal, oil, and gas tomorrow” (emphasis his).[1]

We’re talking about a transition that occurs over several decades, quickly enough to prevent climate disruption from spinning out of control. And that means we have to live within a carbon budget – a specific, well-documented amount of emissions beyond which climate disruption is likely to become unmanageable.  Proven fossil fuel reserves are roughly enough to produce 3 to 5 times this amount. The rest of it has to stay put.[2]

We are screwed. We are going to completely fail to save ourselves from climate chaos, allowing oil production to bust the carbon budget by a factor of 3.[3] Over that time, civilization will be falling apart, with massive food and water shortages, millions of climate refugees, and coastal cities disappearing under acidified oceans. But somehow, we will manage to keep stoking the flames with more and more use of increasingly expensive fossil fuels, even as economies falter and roads slip under the sea. And while this crisis deepens over a period of decades, we won’t make the transition to better, more economical, healthier ways to provide energy and transportation service. We won’t innovate. We won’t learn. We won’t change. We won’t even adopt the clean, affordable technologies we have now. We won’t rein in the power of fossil fuel companies, even as we lose everything dear to their greed. We’ll just keep letting them dig and drill and burn.

This dystopia is as implausible as it is ugly. We may be slow on the uptake, but c’mon, we’re really just going to sit there and watch this run us over? How would we even manage to keep burning fossil fuels under these conditions?  But again, you have to believe this nightmare – to accept it – in order to make “sense” out of Arctic drilling. If we don’t go there, there’s no market for Arctic oil.

Why, then, is Shell moving ahead anyway? It’s a damned good question, one that Shell’s investors are surely scratching their heads over now. Other oil majors have pulled out of US Arctic exploration. And the financial community is increasingly wary of additional capital expenditure to develop “unburnable” reserves. If they could start over now, it’s hard to believe they’d do it; but with billions squandered already, Shell seems to think it’s in too deep to get out.

The assumption of ever-increasing oil demand is especially wacky when you consider that we are already well on our way to phasing out coal and beginning to reduce oil consumption, even as the economy grows. We can see a coal-free future from here in Washington State, and we’re already there in Seattle.  Oil will take longer, but the tide has turned. US oil consumption was about the same in 2012 as it was in 1994, despite 19% population growth (and the decline in per capita consumption started well before the recession.)

And this is what’s already happening. Think what we could do if we put our minds to it. Think about how much freer, healthier, and more prosperous we could be if we had better transportation choices…. if we didn’t have to strap ourselves – physically and financially – to a 2-ton steel box powered by exploding oil sold by tyrants in order to get our 150 pound hides to the store or the soccer game.

If you can afford a car, you can afford an electric Nissan Leaf. If you live in Seattle, it will give you about 90 miles of transportation service for less than 2 bucks’ worth of carbon-free City Light electricity. That same 90 miles would cost you about $10 and produce 60 lbs of CO2 in a gas-powered car that gets 30 mpg. You can send $10 to the Koch Brothers or Exxon-Mobil’s Rex Tillerson for oil, or $2 to your local public electric utility, and keep $8 for whatever. “Whatever” (food, clothing, music, beer…) will create far more local economic opportunity and jobs than oil, plus a bonus: it won’t be used, like oil money, to stack Congress with climate deniers or peddle climate science doubt to school children. With more charging infrastructure and better batteries, why would anyone go to a Shell station again?[4]

No, we won’t give up oil overnight. But California is aiming to reduce its oil consumption by half within 15 years. They’re already on their way to reducing oil use by a quarter with existing policy, and the rest is well within technical and economic reach. California’s Air Resources Board says that reducing oil dependence “cuts costs, improves competitiveness,…stabilizes energy prices, improves economic resilience, and creates new investments, businesses, and jobs,” while also “reducing smog-forming pollution and cancer-causing diesel particulate matter.” 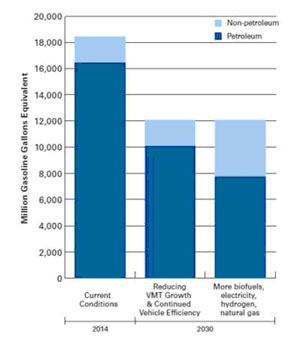 Look, hardly anybody other than Shell really loves the idea of Arctic drilling. Seattle Port Commissioners who approved the homeport lease say they oppose it. The Seattle Times, which has chided protestors and local officials for challenging the lease, has opposed Arctic drilling. Many maritime workers – who understandably want the jobs they can get now – quietly object to the whole business (while other unions oppose it outright.)

But can we really say “Shell, No” to Arctic drilling as long as we are saying “Car, yes”; “Job, yes”; “Maritime industry, yes”? Yes, we can, logically and consistently! We need some oil now; but we don’t need Arctic drilling for expensive oil that won’t be produced for decades and can never be burned. We already have more cheap oil than we can use. (And in the meantime, don’t blame yourself for using oil; hold the oil companies accountable for blocking the transition.)

We can untie the knot this way: We will use oil today, and tomorrow, and for decades – up to almost a trillion barrels. But in the 2-4 decades it takes to use that oil, we can also make a steady transition to a clean energy economy, and move on from petroleum, as we moved on from whale oil before it. Instead of using fossilized, canned sunlight, we can use the fresh stuff, and use it much more efficiently. We have to, if we want our kids to have a decent future. We know how. We’ve already begun.

The Polar Pioneer is a desperate attempt by Shell to stop this transition – to lock us in and squander our energy dollars on prolonging our oil dependence and Big Oil’s profits. The closer they get to that “unburnable” Arctic oil and the more they spend trying to develop it, the harder they will have to fight to obscure climate science, squelch alternatives, and muzzle our democracy to make sure we have no alternative but to burn it.

So today, it’s “Shell No,” to keep them from destroying our opportunity to build a livable future. But every day, it must be Hell Yes to the transportation and energy choices that make that future real.