As solar power gets steadily cheaper and wind starts out-competing natural gas purely on the basis of price, it seems like every week brings news of a new clean-energy deal. Fifty megawatts here, a hundred megawatts there, but when is it finally going to start adding up to real power?

One answer can be found in California, where consistent policies and the falling prices of photovoltaics and wind power have aligned to bring significant amounts of clean power onto the grid. The state has been a pioneer in renewable energy since the 1970s, but in the last five years, it has taken a tremendous leap forward.

Consider the state’s electricity supply on two warm days in the late spring of 2012 and again in 2015, with comparable temperatures across the state and similar cloud cover (Figure 1). On May 31, 2012, renewables (not counting large hydro) supplied 12 percent of California’s electrical energy; on June 17, 2015, that had risen to 21 percent. 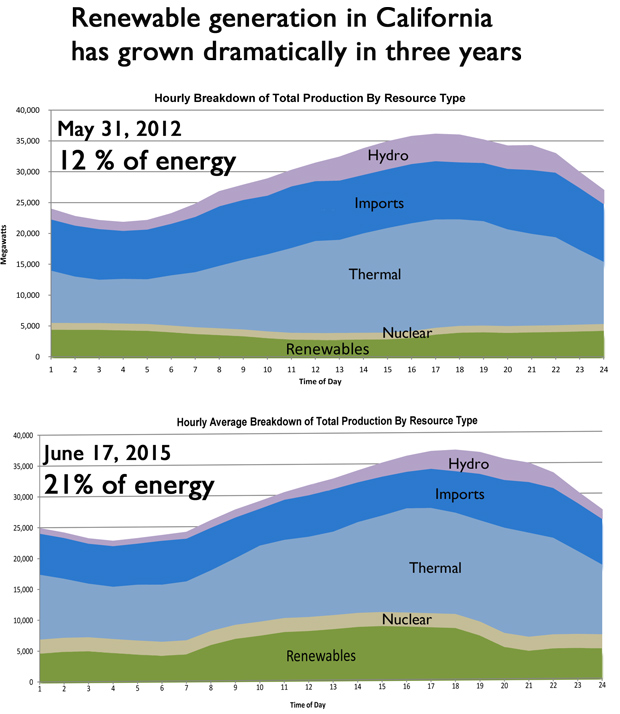 In the above chart, the increase in renewables is reflected in the growing size of the green hump at the bottom of the graph, representing energy produced from renewable sources. The following side-by-side charts clearly demonstrate the surging contribution of photovoltaics (the orange blob in the middle of Figure 2), which went from a little over 7,000 MW-hour on the 2012 day to 51,000 in 2015.

At its peak on June 17, 2015, solar power delivered 5,980 MW onto the grid: eight times as much as on the comparable day in 2012. Wind generation increased slightly, in line with the 20 percent growth in wind capacity in the last three years, and small hydro declined because of the state’s enduring drought.

These figures don’t even count the power produced by the state’s couple of thousand of megawatts in rooftop solar arrays and consumed on-site without even making it onto the grid. That “behind-the-meter” generation has pushed the time of peak demand on the state’s grid back from 4 or 5 p.m. in 2009, to somewhere between 6 and 9 p.m.

This progress has taken root during other seasons as well. Figures 3 and 4 show the renewable power generated in California on a pair of days—Oct. 8, 2012 and March 20, 2015—with fewer hours of available solar power (because they were near the equinoxes rather than the summer solstice), but striking improvement in the percentage of power supplied by renewable energy.

With trends like these, it’s no wonder that California is considering an increase in its Renewable Portfolio Standard, which calls for 25 percent renewables (not counting large hydro) by 2016 and 33 percent by 2020. A proposal by Gov. Jerry Brown, passed last month by the state Senate, would raise the share of renewables to 50 percent in 2030. An increase of about 2 percent per year—a little less than what California has experienced in the last few years—would get there.

Viewing these developments from the vantage point of the Pacific Northwest, it’s important to remember that California didn’t just “experience” this kind of growth in clean energy. Besides setting goals of how much clean power it wanted to bring onto the grid, and how much it aims to reduce climate pollution—as Washington and Oregon, too, have done—the state established policies that put wind in the sails of the energy revolution.

Utility regulations provide for net metering of electricity produced on-site, and for leasing arrangements that allow third-party financing of rooftop solar—a reform that Washington legislators could not agree on this year. California’s landmark carbon cap bill—not unlike Gov. Jay Inslee’s proposed Carbon Pollution Accountability Act—has led to a price on carbon emissions of about $12 a ton, giving renewable power a competitive edge in the market to the tune of half a cent per kilowatt-hour compared with natural gas, or close to a penny a kilowatt-hour versus coal.

Oregon and Washington have both set ambitious goals of reining in our impact on the climate. Renewable energy is making great technological and economic gains, but the example of our neighbors to the south shows that when the popular will translates into shrewd policies, it speeds the transition to the cleaner, safer energy sources we desire. 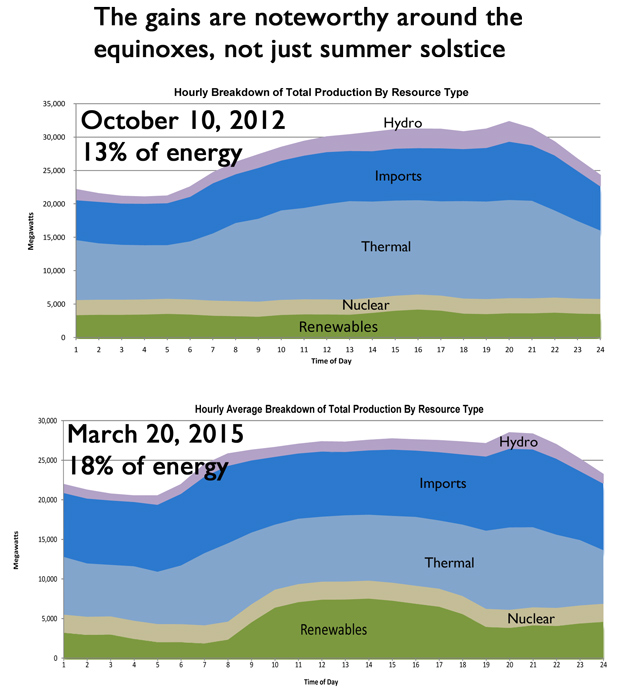