“Final nail in coffin,” “the fat lady is singing,” “last legs,” “dead man walking,” zombie coal proposals” --Help, we’re running out of metaphors! But this past week’s news that the world’s largest privately owned coal company, Peabody Energy, filed for bankruptcy, really does signal the end of the line for the Gateway Pacific project and other proposed NW terminals. Peabody is declaring bankruptcy because its executives made a bad bet that coal use would continue to grow exponentially, despite growing signals that the world was moving to cleaner energy. Peabody’s demise reflects a failed bet on coal exports and the company’s belief that Asian economies would continue to demand ever increasing quantities of its product. Even more fundamentally, they bet the company on climate chaos: on the proposition that the world would use every ounce of available coal reserves, regardless of the consequences.

The announcement came as no surprise. Peabody had notified investors in Mid-March that there was significant question regarding its ability to continue as a “going concern” and that it likely would need to restructure its massive debt load in court. By filing for bankruptcy, Peabody joined a long line of more than 50 US coal companies. The extent and speed of the industry’s collapse has been stunning. As recently as 2011, the four largest US coal companies (Peabody, Arch, Alpha and Cloud Peak) had a combined market capitalization of more than $34 billion. Today, only Cloud Peak has avoided bankruptcy, its value: approximately $126 million. Those college students screaming about divestment? It looks like trustees would have done well to listen.

Peabody’s fall occurred because of its management took on huge amounts of debt in an ill-timed expansion spree earlier this decade, when it thought that international coal markets were poised for continued growth. The company spent more than $5 billion buying Macarthur Coal in Australia – the same year that it proudly announced that it was signing a contract to buy half of the total output from the Gateway Pacific Terminal—24 million metric tons per year (mmty) of the 48 mmty total planned coal export capacity from the project. Peabody has been one of the most active public supporters of the project, and regularly highlighted the planned port in presentations to investors and business audiences as a central piece of its strategy to become the dominant global coal company. At the time of its contract with GPT, Peabody’s then CEO Greg Boyce proudly announced:

"We're opening the door to a new era of U.S. exports from the nation's largest and most productive coal region to the world's best market for coal. Asian nations are leading the world in economic growth and industrial production. Exporting Powder River Basin coal delivers sustainable clean coal, creates U.S. jobs and offers a unique way for America to benefit from major Asian economic growth."

So what happened? Instead of the continued growth that Peabody and other coal companies were banking on, both coal demand and coal prices have dropped dramatically over the past five years, making it unprofitable to mine and ship their product. The graph below compares Peabody’s predictions for the largest import market – China – with the reality. Instead of continued growth, the import market has dropped dramatically and China’s largest coal company now expects to be net exporter in 2016. It is one thing to be wrong – but Peabody’s executives took on billions of dollars in debt to fuel acquisitions and infrastructure investments that were premised on its flawed view that the coal export bubble would continue indefinitely. 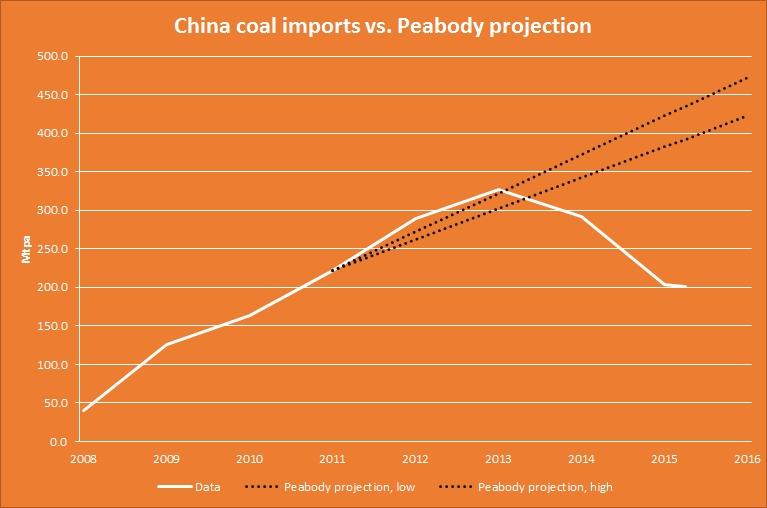 The company has reported significant losses for every year since 2012, culminating in a reported loss of $1.82 billion last year. With the industry collapsing, Wall Street is no longer willing to pony up money for its expansion plans. Peabody had hoped to stave off bankruptcy by selling some of its mines to another coal company, Bowie Resource Partners. But that transaction fell through when Bowie was unable to find any banks or other investors who would back its plans. Some analysts now think that Bowie may be next on the industry bankruptcy parade.

The Beginning of the End for the Fossil Fuel Era

If Peabody’s bankruptcy marks a definite close to the go-go expansion plans that coal executives were dreaming about at the beginning of the decade, it also signals that we are entering a period of climate consequences. Peabody had been one of the most active companies funding climate denial and lobbying against action over the past decade. Fred Palmer, their chief lobbyist for years, even went so far as to claim that accelerating global warming by burning fossil fuels was good for the planet. According to the Guardian, Fred Palmer once told an industry gathering: “Every time you turn your car on and you burn fossil fuels and you put C02 in the air you are doing the work of the lord.”

Despite the overwhelming scientific consensus that we are going to have to leave the vast majority of known coal reserves in the ground if we hope to avert the worst impacts of global warming, Peabody’s management repeatedly doubled down its theory that we would use every ounce of the world’s coal. For example, former CEO Greg Boyce testified to a House Committee:

This is a clear bet on climate catastrophe – a bet on a future that experts have recognized would be beyond adaptation and would create severe consequences for our economy, human health and natural ecosystems.

Fortunately, as Peabody’s stock price plummeted, so has its political clout and ability to thwart climate action. And investors are increasingly asking why they should fund climate destruction. We can only hope that their collapse didn’t come too late to give us a shot at a livable future.

While there are plenty of reasons to celebrate Peabody’s collapse, it is important to remember that the real losers are likely to be coal workers, retirees, taxpayers, and the public. Peabody has been rewarding its executives handsomely, even as their failed strategies drove the company into the ditch. And that gravy train is likely to continue: in prior coal company bankruptcies, executives have received large “retention bonuses” and other payments while workers and retirees have faced huge cuts in promised pension and health care payments. Peabody already sloughed off billions of dollars in pension and health care costs to a poorly capitalized subsidiary, Patriot Coal – which has now declared bankruptcy two times.

The public is also at risk. It may get stuck with huge costs to reclaim and restore public lands that were leased to Peabody for coal mining and which it is legally responsible to return to its original condition. Peabody over a billion dollars in “self-bonding” commitments for its reclamation responsibilities. Under this loophole, regulators allowed the company to essentially give an IOU to state and federal regulators to guarantee the reclamation costs. In previous bankruptcy filings involving Arch and Alpha, Wyoming regulators agreed to settlements guaranteeing payment of only a small fraction of the total clean obligation. Taxpayers should not be left holding the bag for the remaining costs of reclaiming the mine sites.

It is also important to recognize that Peabody and other bankrupt coal companies are not going away. Their stock investors are wiped out, their bond holders will settle for pennies on the dollar, and the public and workers will have to fight to protect their claims as the company seeks to emerge from bankruptcy with a cleaner balance sheet. Meanwhile, it will continue to mine and sell coal, to dwindling markets. That is as it should be – no one expects the transition from coal to cleaner and more efficient energy to happen overnight. But the company’s grand plans to profit from a “coal supercycle” are as empty as its investors' stock portfolios.

Onwards to a Bright Future

Ultimately, Peabody’s bankruptcy and the collapse of the coal industry is an important milestone in the struggle to transform our economy with cleaner and more efficient energy. It is the critical challenge of our age, and something that we are excited to play a small role accelerating.