In 1998, a small group in Olympia, WA decided to take on a growing international problem. After the United Nations framework in Climate Change launched in 1992, and while there was growing concern and international recognition of the daunting threat of global warming, there were only ripples of policy response in the United States. But in a small office near the Washington State capitol, Atmosphere Alliance director Rhys Roth and Energy Outreach Center director Paul Horton saw the need for an organization that could work regionally in the Northwest, developing and promoting practical and economically viable solutions to the climate crisis. Rhys and Paul joined together, merged the two organizations, and formed Climate Solutions. From the start, they met this challenge with an audacious promise to “make no little plans.” 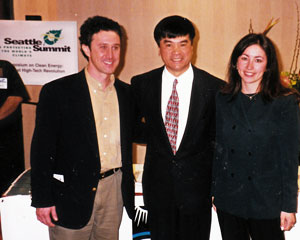 WA Gov. Gary Locke at the Seattle Summit on Protecting the World's Climate, 2000

Our new organization quickly emerged as one of the region’s leading sources of ideas and inspiration on ways to address the global warming crisis. A series of influential reports, many by research director Patrick Mazza, helped put Climate Solutions on the map as a reliable source of expertise not only on the severity of the threat we face, but on the clear possibility of clean energy solutions that can deliver multiple benefits. Through regional convenings across sectors and geographies, collaborative research, and landmark reports, Climate Solutions developed and advocated for coherent leadership strategies based on existing and emerging regional strengths in sectors including renewable energy, information technology, and aviation.

Recognizing that the climate crisis called for action at a societal scale, Climate Solutions developed deep engagement strategies to help Northwest state governments work to reduce greenhouse gas emissions. We helped catalyze the historic West Coast Governors’ Global Warming Initiative in 2003. We worked with legislators in Washington and Oregon to pass a number of key climate and clean energy measures, including clean car standards in both states in 2005, and Washington’s clean energy initiative (I-937) in 2006. Vehicle and power sector carbon standards in Washington and Oregon helped form the basis for the two most important federal climate policy advances during the Obama administration – federal vehicle standards that doubled fuel economy, and the Clean Power Plan. As the organization grew, Climate Solutions also helped create and lead powerful alliances to pursue policy goals that will reduce carbon emissions, protect public health and economic security, and promote innovation in clean energy: those include Renew Oregon and, in Washington, the Alliance for Jobs and Clean Energy. 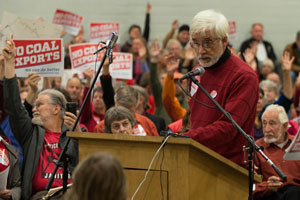 Our vision—that we can, must, and will create a better, healthier world by saying YES to clean energy—positioned us well for a series of struggles against fossil fuel industries, sharpening and amplifying the fact that we must say NO to more reliance on coal and other fossil fuels. In 2011, we helped establish an agreement to phase out and close Washington state's only coal power plant, in Centralia. In the years since that important milestone, fossil fuel companies aggressively sought to expand coal export and oil transport infrastructure in the Northwest. Our highly-visible work with the Power Past Coal and Stand Up to Oil coalitions amplified regional community voices taking a stand against the proposed coal and oil terminals. In collaboration with local business, faith and community voices, and taking leadership from native tribes, our David-vs.-Goliath victories in many of these campaigns galvanized many in our region around our vision of a cleaner, healthier world.

As we enter our third decade of regional advocacy, we face threats and challenges that are in many ways no less troublesome than they were in 1998. But much has changed; climate leadership, once scarce, has expanded to include countless community leaders, grassroots advocates, businesses, and elected officials. Public understanding of and demand for climate action is high and still rising.

In the course of our first 20 years, we helped resolve much of the uncertainty about the prospects for solutions. Our work and our history give us every reason to believe we can deliver climate solutions.

The fateful question now is whether we will, and whether we’ll do it fast enough. Answering that question – winning our Yes – is our mission as CS begins its third decade.

Facing up to the crisis before us, our history, our mission, and our values prepare us for this much: when it comes to climate solutions, we're not taking no for an answer; and we will make no little plans. 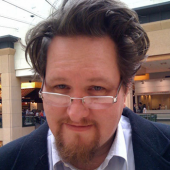