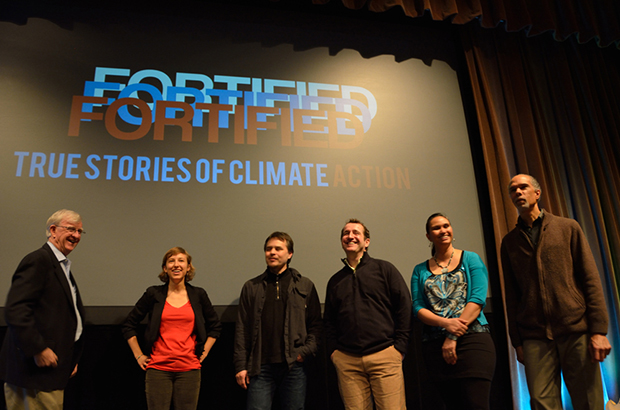 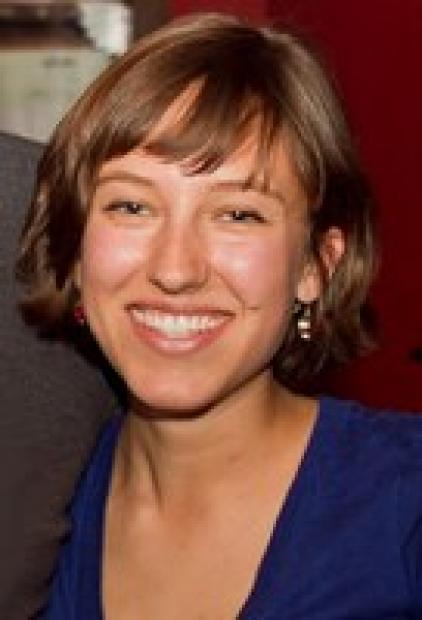 What do an executive, a student, a tribal leader, an activist and a veteran have in common? They were all talking climate action back in February at Fortified! – a climate change storytelling event hosted by the Portland State University's Institute for Sustainable Solutions and in partnership with the City of Portland, Climate Solutions, Ecotrust, Oregon Environmental Council, Renewable Northwest, and the VOIS Alliance.

One of the evenings' storytellers was Camila Thorndike, an intrepid young climate activist who has mobilized communities in Oregon, Washington and California. Now she's working on COAL: the Musical. COAL is a scalable, mythical, upbeat musical fable and grassroots engagement campaign for creative local action for carbon pricing to transition our energy paradigm. Camila also founded and directs Oregon Climate, a new statewide organization working to pass a carbon tax-and-dividend in Oregon.  Learn more at oregonclimate.org

Check out Camila onstage and read her story below:

In college, I was a caricature of the overextended environmental activist. Climate disruption was a threat everywhere so I had to be, too. I organized for clean energy, green jobs, a better farm bill, you name it, dashing around campus from cause to cause with a fickleness that made Speedy Gonzales look like Regular Gonzales.

The week I was passionately organizing in opposition to a proposed coal-fired power plant near the Columbia River, the Republican at Whitman, Kurt, cornered me to ask about the editorial I’d written in the school newspaper.

“Camila, what’s the endgame here?” he asked me… conservatively. “You can block this plant, but I can guarantee they’re gonna build it somewhere else.”

“No, because everyone everywhere will stand up to block all coal-fired power plants, so that we can live in a world without climate change, with crystal clear waters and smiling fish and peace for all the innocent children in the world, free from the tyranny of fossil fuels now and always!”  I patiently explained, in plain English, definitively ending all debate on the topic, forever.

Maybe Kurt wanted me to think bigger, I thought he was a troll, trying to get attention out of me, and I didn’t want to play. But if I were to engage him, it would have been a threat. You see, to fight was my identity. I wasn’t looking for an end to the fight.

So anyway, Kurt asks me silly questions, but I continue to rock my game, winning activist medals and landing cool jobs.

But it wasn’t until one morning in July 2012 that my whole identity came into question, and I realized I wanted to do my work differently. That morning in July, I caught a glimpse of the top of my scalp in the mirror.  I peered closer, not believing what I saw, and as I parted my hair, a clump of it fell into the sink.

At first I hid behind scarves, but my bald spot began to grow and multiply. Showers became terrifying–even washing my face became an ordeal. I saw nests of hair in my shampooey hands, then eyebrows, eyelashes too, and I was looking at part of me, how people saw me, my identity as a pretty girl, slipping down the drain. That was it. I was suddenly limited, suddenly mortal.

What I have is an inflammatory disorder called alopecia where you can unpredictably and permanently lose your hair. There is no known cure, because the cause is not well understood.

Yes, with the help of a good doctor and a lot of luck you can see that I look and feel fine now, but it took almost two years to recover, and I don’t know how long it’ll last.

But in those first few months I was so scared. Everything about my life came into question.

It’s difficult to describe the panic I felt watching my youth melting away in a matter of weeks. I’d never realized how my confidence as a professional hinged on my cute, peppy persona. I know, please, I’m the cutest organizer out there. But seriously – all I had been was a cheerleader, rallying for the most popular fight at the moment, never behind the scenes at the chalkboard considering strategy.

Now, what kind of organizer could I be without hair?

How soon before a younger, healthier climateer would usurp my pom-poms?

What could I accomplish in the time I had left?

And really, how was my story different from anyone else’s?  I was only on a slightly accelerated timeline.

I found myself revisiting my conversation with Kurt. I wasn’t concerned with his endgame, because it wasn’t in my interest for the problems in the world to end. Problems did for me the same thing my hair did: they made me important, wanted, needed. They made me a hero.

Alopecia freed me from that delusion. A single flash of insight that youth is so ephemeral transformed my priorities.  I had been trapped by what a lot of us do, getting obsessed by the problem — because it served me so well.  I’ve heard this called the pathology of problem-worship.  And as it rinsed down the shower drain I found myself back where I started: with deep love for a natural world, a world that demands a satisfactory endgame.

Now I found myself exclusively interested in healing the root cause of nature’s symptoms.

When I learned my prognosis, I quickly resigned myself to wigs and eyebrow paint for the rest of my life. But the people who loved me never gave up looking for a cure. My dad quizzed doctors he met on planes, my mom urged me to pursue meditation, my sister reached out to alternative medicine practitioners, and my boyfriend juiced me anti-inflammatory root vegetables.

The people in my life wouldn’t settle for symptom management—because they loved me.  The planet needs that kind of love, and you are the ones to give it.

We will address the cause of these symptoms exactly when the most profitable industry on earth pays the full price for their commodity, at the moment they extract it from the ground—not by fighting every pipeline or putting bricks in the back of our toilets.

A true price on carbon will make the health we hope for finally affordable.

The reason I’m so inspired to be here is that I see amazing climate doctors in the audience:  I see Christina and Fletcher doing critical work here at PSU for an Oregon carbon tax, and Tamara and Laura organizing for a national carbon tax with the Citizens Climate Lobby. And there are so many of you in the room I don’t know yet, but I know what you have to give is essential to a movement that can win climate stability.

The International Energy Agency reports that we have two years, till 2017, to pull out of our massive fossil fuel investments if we are to avert a catastrophic 2*C global temperature increase.

No amount of wind turbines and solar panels and recycling programs will convince the Koch brothers to let up on tar sands.  It will not be possible to simultaneously save the planet and serve the dogma that this crisis demands many solutions. It is time to muster the goodwill we need to focus, with discipline, on the root of our symptoms.

I discovered that goodwill—that love like my family showed in my hour of need—through art activism.

A year ago, I helped to organize hundreds of students, teachers, retirees and otherwise concerned Oregonians to construct a 120-foot mosaic of a salmon from 1,500 works of art, each expressing someone’s love for the Rogue valley.  A few months later in May, the salmon migrated upstream to Salem, where we trained 100 people from around the state to lobby for a revenue-neutral carbon tax. Our state representative would later tell us that our efforts were instrumental to passing an appropriations bill to study an Oregonian carbon tax.

The salmon was literally and metaphorically larger than the sum of its parts.  Like a sand mandala, it spawned stronger activists and perished in the Oregon rain.

It empowered us to build a community on a foundation of shared concern, bypassing the pathology of problem-worship, and strengthening our resolve to work together for a solution.

The salmon opened my eyes to the ancient power of art. Making art together about what we love is critical to inspiring our insistence on real solutions.

It will not be easy to win a fair and effective price on carbon. Luckily, our movement is enormous. Instead of despairing about the successes of the fossil fuel industry, let’s take the first tip from their playbook: one goal.

I believe it was my ego, my self-importance, that made me reluctant to focus on a solution so much larger than myself.  Alopecia helped me to move beyond my shortcomings, but we no longer have the luxury of recruiting more soldiers by allowing them to fight any battle.

I want to recruit you all to love the solution with the power of art.

The first project I’m so stoked about is a national arts and culture initiative called COAL. It’s a scalable musical about a family facing the paradox of fossil fuels that anyone can put on, anywhere, to spark conversations about solutions. We want Portland to do COAL in a big way and we’re looking for hosts, sponsors and audiences.

The second is a new volunteer network called Oregon Climate that is bringing communities together to pass a carbon tax here in 2015. We’re looking for support and organizers so please check it out.

Thoreau wrote that “There are a thousand hacking at the branches of evil to one who is striking at the root.”

I believe that our love for each other and this amazing world compels us to dig deep find the root cause of climate change, and cure it.  We are fortunate to already know that the first, sharpest, and best tool for this operation of health is a carbon tax.

To be in love means to never give up. I’m not giving up and I know you’re not either.  Let’s love this planet to health.