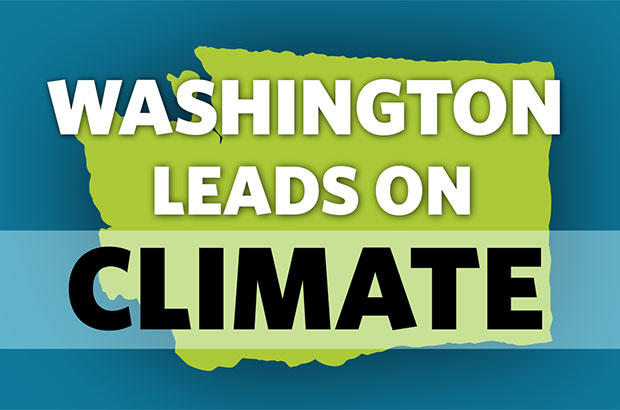 This is what climate progress looks like
Vlad Gutman-Britten
April 30, 2019

What a difference a year makes. Last year, Washingtonians stared down one of the worst years for climate progress in recent memory, we bore up under disappointments and held our breaths for brighter prospects in the future. And now, after a fourteen-year climate action drought, our Washington Legislature rose to the occasion. Sometimes if you hope hard enough and work relentlessly, it turns out it’s all for something—progress is possible.

And let me assure you—so far, 2019 has been a bad year for the bad guys. Senators and representatives voted for aggressive action, plotting the course for fossil fuel and carbon reductions in every major sector of our economy and did so with attention to the rights of working people and to the impacts of global warming pollution on our most vulnerable communities. Some highlights:

Launching our transition to 100% electricity: Washington is the first state in the Northwest and the fourth state in the nation to enact a legally required phase-out of carbon pollution in our electricity sector - and the policy our legislature passed is far and away the strongest in the country. SB5116 targets full decarbonization of our grid by 2045, and provides for carbon neutral electricity by 2030. But it does more than that—it offers a significant expansion of low-income energy assistance, requires our utilities to consider equity impacts as they build systems and infrastructure, incorporates the nation’s highest social cost of carbon into utility plans and, for the first time, predicates tax incentives on job quality criteria. Our groundbreaking policy sets precedents for further improvements, both here and in other states.

Achieving 100% clean has been a labor of love, and we’re immensely grateful to Representative Gael Tarleton, who has worked on 100% clean electricity for years. Appreciation also to Senator Reuven Carlyle who was the prime sponsor and shepherded the bill through the Senate. This bill would have been much weaker without the dogged work of Representative Joe Fitzgibbon who was instrumental in protecting the bill’s integrity and guiding it all the way home. Finally, no list of champions can be complete without Lauren McCloy, a senior policy advisor to Governor Inslee, who worked nights, weekends, and vacations to make this victory possible.

Making Progress on Clean Transportation: The bipartisan duo of Representatives Jake Fey and Ed Orcutt, with a key Senate assist from Senator Rebecca Saldaña, delivered an important transportation electrification priority under the wire—culminating in both chambers voting on the policy with less than twelve hours left on the legislative clock. HB2042 will direct investments in excess of $160 million in renewed electric vehicle incentives as high as $2500 in certain parts of the state, a new Capital Grants program that will support electrification of transit fleets, fund charging infrastructure and for the first time fund low-income electric car share, and more. With support from utilities, auto manufacturers, transit advocates and agencies, and environmental groups, this bill represents the largest investment in clean transportation sector in state history. Also, Seattle City Light and Tacoma Public Utilities, along with other public utilities, led the charge on HB1512, which will expand utility investment in this areas as well.

Unfortunately, transportation is also the one area where we experienced our most significant loss. The Clean Fuels Standard didn’t make it to the finish line. After the House of Representatives passed the policy, the Senate didn’t advance it past the Transportation Committee. The Clean Fuel Standard is a keystone transportation policy that provides fuel choices for consumers, cleans up our air and cuts climate pollution. We’ve fallen behind—Washington is the last West Coast jurisdiction without the standard. While Big Oil is breathing a sigh of relief, this fight is far from over. The Legislature’s failure this year means that the oil industry gets to protect their transportation fuel monopoly, but the days of their veto power in Washington are numbered. The Puget Sound Clean Air Agency is poised to adopt a regional standard, and we and our health, air quality, clean fuels, and other allies are coming back next session for a statewide policy. Count on it.

Cleaning up our built environment: Buildings represent more than a quarter of Washington’s emissions and the total continues to climb. That’s why Representative Beth Doglio’s HB1257 is such a critical measure. The Clean Buildings for Washington Act is the first state law to require retrofits of existing commercial buildings, the largest of which are significant energy hogs, and subjects natural gas utilities to stronger efficiency standards, including planning with the same social cost of carbon incorporated into the 100% clean electricity policy. Great work by Chris Davis, in the governor’s policy office, and Amy Wheeless at the NW Energy Coalition to develop and pass this policy. Also notably, Representative Jeff Morris sponsored an important appliance efficiency bill that crossed the made it to the governor’s desk as well.

And more: A ban on hydrofluorocarbons, potent superpollutants used for refrigeration and cooling, and legislation requiring increased housing density (which is a key climate issue) became law this year under the leadership of Representative Joe Fitzgibbon. Senator David Frockt passed a major reform to the Model Toxics Control Act, which will increases taxes on oil to help pay for some of the health and environmental harms caused by fossil fuel pollution.

There’s more to do—the loss of the Clean Fuel Standard hurts; we need to do more to deal with fracked gas in commercial and residential settings (which is killing you, by the way); and much more. One of the great works of Jewish ethics, Pirkei Avot, quotes a first century sage who said “it is not your responsibility to finish the work, but neither are you free to desist from it.” The work of healing our home, of creating a just society that sustains all people, that rights past wrongs, is more than the work of one person’s lifetime, let alone one legislative session.

But the last few months are a reminder that our collective work is for something. If sometimes you look toward the other Washington and despair that we can make a difference, you should remember this: when we raised our voices, when we demanded action, our leaders listened. Together, we achieved progress that will make our future brighter.

We haven’t gone as far as we must, and more work remains; but we know that a safer, healthier, better world is possible.