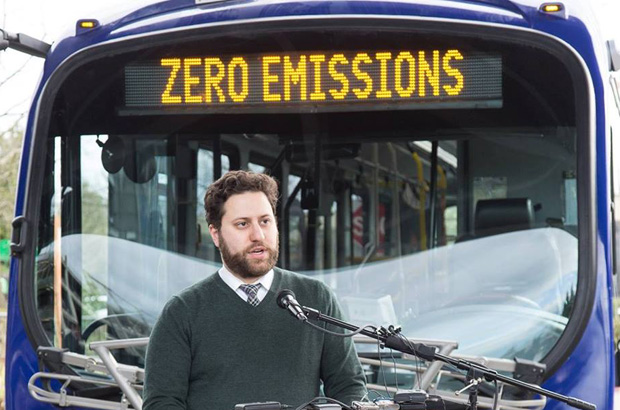 King County has a long record of leading the way on clean public transit. In the mid-2000s, Metro Transit began the process of converting its largely diesel fleet to a hybrid electric one that reduced fuel usage by a third and saves the county millions every year. At the time, the agency was one of the first in the world to take this step, and it almost single-handedly created a new industry in cleaner public transit.

But even the cleanest diesel buses still emit about 2 kilograms of CO2 per mile into our atmosphere. They also release a range of pollutants that contribute to asthma and lung disease, especially among communities clustered near large roadways. King County operates more than 1,600 such buses.

Moving to electric transit is a logical next step, which is why we’re so excited that King County Metro Transit has gotten the ball rolling with three new Proterra Catalyst battery electric buses. Each of these electric buses will save Metro Transit as much as half a million dollars in fuel and maintenance costs over its lifetime—more  than paying for the upfront investment that puts the buses on the road. And they’re manufactured in the United States, providing hundreds of jobs in South Carolina and elsewhere.

This transition is a game changer—again.

The new buses will run quietly and comfortably, improving the public transit experience for passengers as well as people waiting at or walking by bus stops on the street. Living in parts of town with regular public transit access is valuable, but your average diesel bus is extremely loud and not fun to be (or breathe) next to. As more of these electric buses hit the road, they will transform even the experience of walking around our city.

And of course there is a massive air quality benefit. Increasingly frequent episodes of extreme weather and drought take their toll on our air quality—even the Olympic rainforest burned for several weeks last year. Communities that live next to highways and major roadways breathe in dangerous exhaust, and they’re often least able to afford a safer part of town. Buses and mass transit cut down on the number of cars in the street, but if transit is powered by diesel, we are missing the full potential benefits.

These electric buses represent a vision of something better. Public transportation gives people options to get around outside of their individual cars, and as Metro Transit moves people to take mass transit, we need to make that is as clean as possible too. Metro Transit is rolling out 27,000-pound, forty-foot buses that pollute less as they drive than a Prius—and that’s amazing.

Our planet will benefit certainly, but we’ll feel the benefits closer to home too, as vulnerable communities that live next to major roads breathe cleaner air from cleaner, quieter buses. But that’s why this has to be a first step. In 2004, Metro began to transition to an all-hybrid fleet, a goal it will hopefully achieve by 2018. We hope that a new transition—to 100% electric—is the next step and happens quickly too.