More than 70 businesses, including fossil fuel giant Shell and utility EDF Energy, recently signed the "Trillion Tonne Communique," asking governments to put a price on carbon in order to limit emissions to one trillion metric tons (we're already more than halfway there). The ultimate goal is to make the world net-zero emissions by 2100. Sounds great.

Unfortunately communiques are toothless tools. Reminiscent of empty Cold War rhetoric and decades of failed Middle East Peace talks, they are easy to sign and difficult to realize.Same with the many petitions floating around.

The fundamental problem with the new communique, however, is that it reinforces a flawed assumption - an assumption that must change if we are to achieve the communique's worthy goals. It assumes that the critical actor on the climate issue is government. If lobbying didn't exist that might be true. But today's reality is that buying influence (whether sanctioned or not) is core to global policy making and regulation. In fact, big multinational businesses asking government to fix a problem is a Shell Game. To use the U.S. as an example, it would be like asking Congress or the White House to spoon feed you when you made and owned the spoon, produced the food on the spoon, and controled the arm that's delivering the food into your mouth. In essence, business is asking for something that it has the influence and ability to provide.

Business, not government, is the critical actor in the battle to halt climate change.

And within business, multinationals dominating the energy, mining and utilities industries, such as Shell and EDF, are the ultimate masters. A report issued in 2013 found that 50 of the 500 biggest listed companies in the world account for emissions of 3.6 billion metric tonnes, or 73 percent of total greenhouse gases (GHG).

Shell, for example, despite signing numerous communiques and joining several climate groups, until recently was aggressively investing in Arctic oil exploitation. It shifted its strategy in early 2014, but that was less the result of its commitment to climate action, and more about P/E ratio.

The businesses that lead the change will be the beneficiaries of climate wealth. Those that don't, won't.

This post originally appeared on the author's LinkedIn blog. 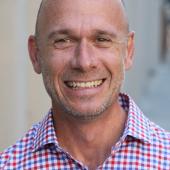