At Oregon Wild, where I work, the team has been keeping a close eye on snow reports.

In addition to our conservation work dedicated to preserving Oregon’s wildlands, wildlife, and waters, throughout the year our staff and volunteers guide hikes, plant and mushroom ID walks, snowshoes, and cross country ski treks. We want to help others appreciate Oregon’s special places like we do. 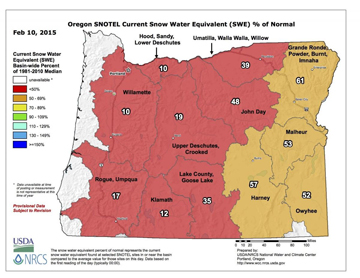 And so it is a disappointment that we’ve ended up having to reschedule many of our winter snowshoe trips and cross country ski treks.

The National Oceanic and Atmospheric Administration (NOAA) reported this month that 2014 was the hottest year on Earth over the 134 years that records have been kept, a trend primarily attributed to rising greenhouse gas levels.  Oregon has not escaped this trend and posted its second hottest year since records began in 1895.

“We had a warm summer, and now a warm winter and that’s where we got our warm year,” said Kathie Dello, deputy director of the Oregon Climate Change Research Institute at Oregon State University. “We are looking at our future right now – warm winters and low snowpacks.”

The problem isn’t just the amount of precipitation; it’s that we’re not getting enough of that participation in the form of snow. With lower snowpack levels across Oregon, especially in Central and Western Oregon, the impact goes beyond cancelled snowshoe trips and closed ski areas. We rely on that snowpack to fill our reservoirs, water our crops, sustain our fisheries, quench our cities’ thirst, and dilute our pollution. Oregon could be facing a drought, which is bad news for farmers, fish, rivers and, well, everybody.

You see, Oregon has a lot of forests, and great conditions for growing long-lived trees, and those forests store a lot of carbon. It’s not just live trees – carbon is also stored in dead wood, roots, and other plants. And of those forests, the older they are, the more carbon they can store. The Pacific Northwest’s temperate rainforests are among the greatest biomass stores per acre of any ecosystem on Earth! This is why, in terms of storing carbon, six of the top ten National Forests in the US are right here in Oregon!

On the other side of the coin, aggressive and unsustainable logging of those forests can contribute heavily to greenhouse gas emissions and climate change. Carbon stored in the logged wood for a fence or deck may last a handful of years, but if we leave that carbon in an old growth tree can stay there for hundreds of years.  The protective paint on the side of a house may stave off the elements for decades, but it’s nothing in comparison to the natural defenses of tree bark.

While logging does create young forests that absorb carbon, the process of harvesting large old growth and burning logging debris transfers most of the carbon to the atmosphere leaving a “carbon debt” that takes the growing young forest centuries to repay. Removing canopy cover also warms the soil, increasing decomposition and the release of greenhouse gases from the ground. Logging can even create greater carbon emissions than forest fires!1

Conserving our forests, especially old growth stands, is not just important as an effective way we can help mitigate climate change. These wildlands also serve as critical habitat for Oregon’s wildlife, including many threatened and endangered species. Oregon’s forests provide cool rivers and streams for salmon, and clean drinking water. And they are backdrop for the outdoor recreation opportunities that make Oregon a special place, from backpacking and horse riding to hunting and fishing.

And maybe, if we do this right and act in the best interests of the planet, we’ll still be able to do some snowshoeing. 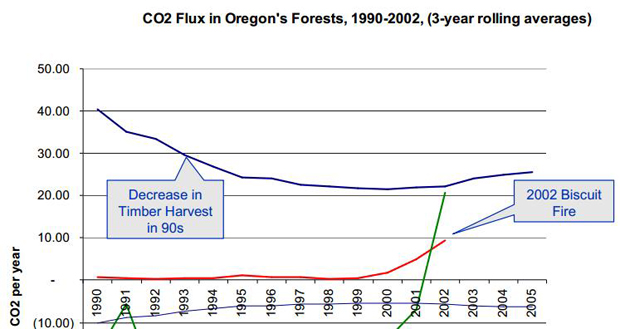 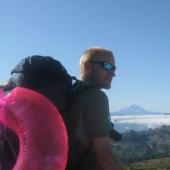