An invisible cloud of toxic algae is growing in the Pacific Ocean, damaging local economies and ecosystems, and bringing climate change impacts to our doorstep here on the West Coast. This microscopic algae bloom contains high levels of Domoic Acid, a potent neurotoxin that accumulates in shellfish and filter fish, such as sardine and anchovies. Depending upon the amount ingested from contaminated food, Domoic acid can cause vomiting, abdominal cramps, headaches, memory loss, cardiovascular instability, seizures, and death.

This May, NOAA (National Oceanic and Atmospheric Administration) began receiving reports of high Domoic acid concentrations coming from Alaska, Washington, Oregon, and California. These reports were the first suggestion of an unusually large algae bloom; cumulative research led NOAA to confirm that Pacific coastal waters are currently contaminated by the largest, most toxic, and densest bloom of Phytoplankton ever recorded. The worst of the bloom is in Monterey Bay, California and Central Oregon, and extends south to Santa Barbara and north up to the Gulf of Alaska. The last bloom close to this size, in 1988, stretched from Southern California to Washington.

The warmer ocean water resulting from climate change exacerbates this natural phenomenon, leading scientists to predict that these phenomena will only increase if temperatures continue to rise at our current trajectory. The ocean absorbs up to 90% of the world’s emissions, and consequently the surface temperature of the ocean has risen substantially since the 1900s, peaking in 2014. The consequences of cumulative warming include ocean acidification, chemical-imbalance, species extinction and migration, and large blooms of toxic algae.

As a result of this year’s bloom, state officials have closed numerous beaches to shellfish harvesting and have even halted some commercial shellfish operations and fisheries.

Coastal town economies in Washington and Oregon suffer the most as officials close beaches to recreational harvesting and restrict commercial operations in order to protect public health. These towns rely heavily on tourism revenue gained in summer months when people take vacations to fish and harvest clams. When those beaches close, the tourism industry falters and the whole town suffers. Closing beaches to razor clam harvesting has cost rural Washington towns an estimated $9 million of lost revenue in June alone. The loss for commercial harvesters in the area during June was approximately $250,000.

Fishermen and crabbers who live and work in these rural coastal towns are facing job insecurity and income loss as a result of shutdowns. The Dungeness crab industry in Southern Washington, which brings in about $80 million annually, was forced to close this summer as well; it has been the largest Dungeness crab closure in history.

Dungeness crabbing is a lucrative industry, and closures create problems both for crabbers and for their communities. Dungeness usually sell for about $20 a crab; earnings total thousands of dollars a day. Washington crabber Tom Petersen described his feelings about the Dungeness closure in an NPR interview: “I was sick to my stomach because I have a crew that fishes for me, and right now they’re out of work on unemployment. One of them’s trying to make house payments. The other one’s got kids they’re trying to raise and they’re just all standing on the sideline now.”

This algae bloom, while a significant environmental problem, has not been a large public health concern due to frequent harvest testing and fast response times for beach closures and public warnings. Coastal wildlife, however, have been less able to avoid the harmful effects. While people are able to heed warning signs posted on beaches and purchase safe food at stores, marine mammals and birds cannot read. A video taken in Long Beach, Washington showed a California sea lion arching his back and bobbing his head, behavior that NOAA scientists attribute to seizures.

Smaller domoic acid algae blooms are common in isolated spots in the late summer and early fall months when water temperatures are warmest. This current, unprecedentedly large bloom concerns scientists because of the magnitude of size, density, and toxicity, combined with the timing of its appearance. In late July, NOAA awarded Washington State an $88,000 grant to study and respond to the growing algae bloom. The study will answer remaining questions about the specific conditions in which toxic algae grows, how it can be mitigated, and in the meantime, how we can protect the ecosystem and ourselves.

While many factors combine to cause unusually warm areas in the oceans, climate change is well-understood to be a prominent factor—and one which shows no sign of stopping or turning around without a major course change on our part. It’s clear that this algae bloom is a likely harbinger of the future, and one more unavoidable reason to take swift and decisive action on climate change now. 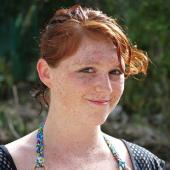 Becky is currently pursuing her master’s degree at Humboldt State University’s Environment and Community program. Her thesis focuses upon textual and visual messages presented to the public from companies and organizations involved with breast cancer awareness, in particular, how they minimize the importance of environmental causes. Prior to graduate school, she worked in the sustainability department at Virginia Mason Medical Center, providing project and administrative support to the department head.

In her spare time, Becky enjoys cooking, playing with her Samoyed Kodi, and making a variety of all natural personal care products.