For over a decade, scientists have argued that mycorrhizal fungi should be included in models of global carbon cycling, but they have struggled with exactly how to incorporate below-ground microbial processes into vegetation and carbon models.

Scientists have historically referred to the processes occurring within the soil as a “black box.” Considering  that 1) experts estimate mycorrhizae may account for as much as 5 billion tons a year in the global carbon flow, 2) the soil is the largest terrestrial carbon pool on the planet and 3) mycorrizae make up a large portion of the soil’s biomass, it’s clear we could gain tremendous insight from adding mycorrhizae to our biocarbon models.

Vegetation modelers often assume that plants allocate 50% of their carbon to aboveground biomass and 50% belowground. Much is known about photosynthesis and aboveground respiration, and how plants interact with the atmosphere, but what happens to that carbon the plants send belowground? Does it just get turned into roots?

The answer is no. Some of it gets turned into roots, but much of it gets shared with beneficial fungi, the plants’ main provider of nutrients from the soil. These fungi act like very fine roots, accessing the tiny pore spaces in the soil not accessible to bulkier plant roots, and they break down and share nitrogen, phosphorous and water with the plants in exchange for carbon from photosynthesis.

Plants have been known to support large communities of mycorrhizal fungi below the soil surface. In addition to providing nutrients to the plants, the fungi improve the plants’ immune systems and aid in re-establishing plant biomass after a major disturbance like a fire. The strands of fungi form large communities beneath the soil, connecting with and supporting many plants, not just one individual. They can move large quantities of carbon along these strands, and exude carbon into the soil to “condition” the soil structure and make it more hospitable. These residues leaking into the soil also feed other microbes, such as bacteria– another important aspect of soil biomass. This stream of carbon from leaves to soil is what makes mycorrhizae a factor in global biocarbon accounting. 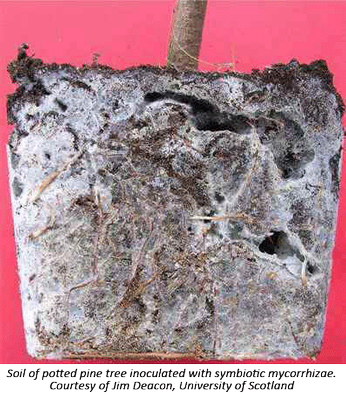 In addition to enhancing soil carbon stocks, fungi are essential to the resilience of aboveground carbon stocks. There are studies underway to determine whether some tree species will be able to migrate in response to climate change, if their associated mycorrhizae can’t find an appropriate soil habitat in the new location.

Each of the thousands of mycorrhizae species form relationships with specific plant species. They have different ways of connecting with forest versus grassland species, and their distribution in the soil can be very patchy due to the major variations in soil conditions from one place to another. This is a consideration for assisted migration, but great success has been seen in many agricultural and wildland restoration settings with dipping tree and plant roots in their appropriate mycorrhizae before planting them. This helps the mycorrhizae form connections with the plants quickly and both plant and fungi can establish in the soil, given adequate water and nutrients and a soil texture that allows movement and expansion of the fungi. Tree species are far more likely to re-establish if they have been inoculated with mycorrhizae before reforestation.