It’s strange to feel so angry and so hopeful at the same time. Shell’s “under the radar” attempts to park its Arctic-destroying drill rigs in the Port of Seattle, bypassing public involvement in the decision, makes my blood boil. It’s infuriating to see giant fossil fuel corporations trample over our democratic processes like this. On the flipside, I’m seeing Seattle - where I was born and raised - step up and make it clear exactly how we feel about these unwanted visitors, and it makes my heart sing. 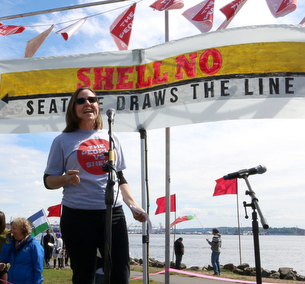 We’ve worked hard to earn our name of the Emerald City. We composted before most cities knew what composting was. We aim for Zero Waste, reduce our carbon and believe everyone deserves a living wage. We know how to come together to stand against corporate power run amok; how to reign in companies that would alter our climate and mortgage our future for short term profit. We did it in 1999 and we won. If anyone can stop Shell’s pathological plan to keep drilling and burning the fossil fuels which are literally threatening our future, Seattle can.

And that’s just what we’re doing.

I saw this resistance first hand when I stepped up onto the stage at the “sHell No” rally at Myrtle Edwards park two weeks ago. The weather forecast had promised rain all week but as the 1000+ people gathered, the sun broke through the clouds over Puget Sound as if to add its voice to the crowd. And what a crowd it was! People had come from as far as Portland and Olympia. Students, grandparents, Seattle locals and transplants mingled together. The crowd included old friends and new faces. My 15-year-old daughter was there, along with my 82 year old mother. Even my high school librarian who I hadn’t seen in 25 years came to declare that Seattle wants no part in Arctic drilling.

Since that gathering, Mayor Ed Murray added his voice to the growing public chorus. Murray announced that an investigation by the Seattle Department of Planning and Development found the Port’s plan to let Shell’s fleet use Terminal 5 as a homeport violates its twenty-year-old shoreline permit. In short, Shell’s not supposed to be there. We’re waiting to see what happens next. Will Shell look elsewhere? Will Seattle’s Port Commissioners reconsider their invitation to Shell? The city of Seattle’s investigation is the kind of leadership we need: asking important questions rather than acting like Shell’s plans are something we just have to accept. We have yet to see the same leadership from President Obama, who in fact has the ability to veto Shell’s Arctic drilling debacle altogether.

One thing's for sure: Seattleites aren’t about to give up easily. We know that building a clean energy economy is going to require hard work, but we’re not daunted. And we know that an important first step is drawing the line at continued fossil fuel extraction. Oil companies already have more oil reserves than the climate can sustain burning; the last thing we need is more. We want our city to be a leader in that new clean energy economy, not a homeport for the dinosaur drill equipment from yesteryear.

It is time to raise our voices, not our sea levels!  Please join fellow Seattleites in declaring our city, our port, our waters off limits to Arctic drilling rigs. The next big public mobilization takes place on May 16th - 18th and will include a big family-friendly kayak flotilla. Hope to see you there! 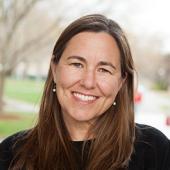 Annie Leonard is the Executive Director of Greenpeace USA. She has over two decades of experience investigating and explaining the environmental and social impacts of our stuff: where it comes from, how it gets to us, and where it goes after we get rid of it. Her film, The Story of Stuff has been viewed over 40 million times and blossomed into The Story of Stuff Project, eight more films, and the 2010 New York Times bestselling book.

Leonard currently serves on the boards of Ben & Jerry’s, Wallace Global Fund, Story of Stuff and is a Leadership Liaison for Rachel’s Network. She began her career at Greenpeace in 1988 and now leads the organization’s U.S. office out of the Bay Area, where she lives with her teenage daughter.