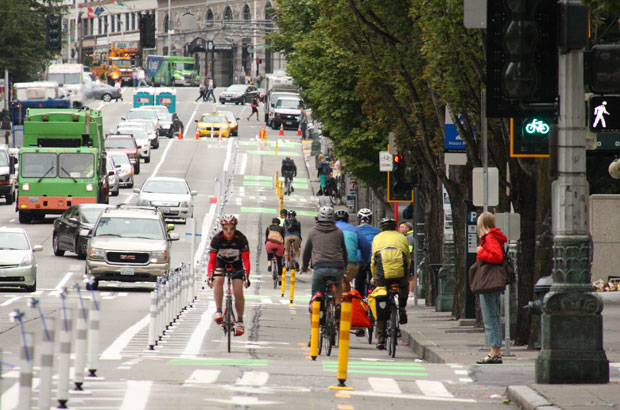 SDOT
For cities, bike networks are a free-wheeling climate solution
Leah Missik
May 7, 2019

This year, Washington has made brave strides into a clean energy future, with the Legislature approving new commitments to achieve 100% clean energy, to strengthen clean buildings standards, and to advance clean transportation. Of course, given the scale of the climate crisis, there’s still a lot we can—and must—do to reduce emissions and slow down our contribution to climate change.

Transportation is, by far, the largest source of our greenhouse gas emissions in Washington, contributing over 42% of our total climate pollution. Climate advocates and policymakers have pointed towards a number of strategies for curbing our tailpipe emissions, including a clean fuel standard, vehicle electrification, better access to transit, reducing the number of miles traveled by car, and making it safer to walk, bike, and scooter. We should be pursuing all of these options, and doing it now. Some of these require action at the state level, some are local. But even the pathways that seem to have the most to do with individual choice—like the choice to make trips by bike instead of by car—will rely on collective commitments to really show up as the powerful climate solutions they can be.

That’s why connected, comprehensive, accessible bike networks are integral to cities’ plans for carbon reduction. It’s why Seattle should realize the vision of its Bike Master Plan, a blueprint for making riding in Seattle easier, so that “riding a bicycle is a comfortable and integral part of daily life in Seattle for people of all ages and abilities.” With a good bike network, more people will make the choice to bike—for convenience, for health, for economic reasons, even for speed—with immediate benefits to a community’s air quality, traffic flow, and livability. And, of course, it will benefit the climate. Let’s take a look at why a growing number of cities are deciding that strong bike networks are a key part of envisioning a healthy clean energy future.

The more people feel safe bicycling, the more we can reduce our climate pollution. In the Puget Sound region, passenger vehicles alone are responsible for nearly three-quarters of our transportation emissions and 28.5% of our total greenhouse gas emissions. Right now, the average Washingtonian drives almost 13,000 miles annually, emitting over 10,000 pounds of carbon. Switching out car trips for clean modes such as bicycling can have a tremendous impact on reducing our carbon emissions, both personally and at scale.

Cars also take up a lot of space, which matters when we’re talking about the climate. Bicycles require a third to a thirtieth of the road space that a car does, depending on travel speeds. They also require far less parking space. Overall, driving requires about fifteen times the total space as bicycling. Reducing these space needs translates to the possibility of cozier communities, where concrete space and sprawl are mitigated, and where we have more room for homes, businesses, and open space—which has positive climate and other environmental impacts. When these amenities are closer to home, there is less of a need to drive, which cuts down on the carbon pollution stemming from our vehicles and our infrastructure.

There is an unmet demand for safe bicycling infrastructure. Right now, bicycling is not the most popular way to get around, but that doesn’t mean that everyone who is not bicycling has no interest in doing so. In fact, almost half of Americans want to ride more often, but have concerns about safety. This sentiment is echoed in Seattle, where the most commonly cited reason for not biking is not the rainy weather or the hills—it’s not feeling safe.

Many of us drive even when we don’t have to go far. In fact, the most common trip distance by car in the Puget Sound is less than a mile. Though not everyone is able to walk or bicycle that distance, many can, and would, if it were safer to do so. The issue is that our current infrastructure makes it hard to choose alternatives. We can, and must, create greener, healthier communities with safe transportation options, including the bicycle!

When people feel safe, they’re more likely to ride. For anyone in Seattle, I recommend visiting the Burke-Gilman trail, dedicated to non-motorized transit, which stretches out among the city streets on its own grade-separated path. It’s striking to see how many bicyclists use this great example of safe infrastructure for their regular rush-hour commute. Research shows clearly that there is a demand for biking when it’s safe, convenient, and connected. For example, protecting and then extending the 2nd Avenue protected bike lane in downtown Seattle led to a 413% increase in ridership. That’s not a typo! Make it safe, and then people will ride.

People who bike (or want to bike) come from many different communities—and the needs are greatest where air pollution has been disproportionately harmful. We have an option as we address the climate crisis. We can maintain a status quo that got us here in the first place, that perpetuates inequality and environmental degradation, or we can build healthy, resilient communities that contain opportunities for all.

When we make decisions about our infrastructure, we need to consider who is impacted and who benefits. Lower-income folks are least likely to get around the Puget Sound region by car and are much more likely to walk or take transit. But national research shows that people of color are generally more likely to be regular bicycle riders and that the lowest-income households bike the most for both transportation and recreation. Poorer people are more likely to commute by bike, and drive less. Meanwhile, people of color and lower-income folks are more likely to be killed or seriously injured when walking or bicycling—and Washington pedestrian and bicycling deaths have doubled since 2013. Safe bicycling and pedestrian infrastructure is an equity issue for many reasons, and therefore we need to ensure that we create this infrastructure, especially in those communities who will benefit from it the most.

Many areas in Washington, especially those home to communities of color and lower-income areas, are burdened with poor air quality, and vehicle emissions bear a huge part of the responsibility. Motor vehicle pollution can cause lung and heart problems and premature death. Children, the elderly, and those with lower-incomes are at the greatest risk. So, not only is bicycling good for the health of the bicyclist, it’s good for everyone else!

Making bicycling safer benefits everyone on the road. The more people who bicycle—or walk, or scooter—means fewer vehicles on the road, which reduces congestion. Studies also show that only under one scenario does bicycling slow down traffic: that is, on narrow, already-busy roads with high-speed traffic—exactly the type of situation most people don’t want to bicycle in and which safe infrastructure would eliminate. Traffic eases up when people have options and are able to choose to not drive.

Bike infrastructure is good for businesses. That’s even true when bike lanes displace some parking spots. Studies from around the United States and the world show that bicyclists actually spend more at local businesses than people who arrive by car. A study in Seattle showed that a new bike lane in Greenwood had “no negative impact” on business there, while sales actually rose after a new lane was installed on 65th Street.

Bicycling is a good transportation choice—and a powerful climate solution. As we shape our communities so they cut carbon pollution and are more resilient to climate change, we have the ability to improve them. Giving people the opportunity to bicycle, a clean transportation option that even benefits non-riders, is one of the many ways we are working on reducing climate pollution from transportation. Everyone should be able to safely get to work, run errands, and visit friends using the green transportation option that best suits their needs. For some, that is the bicycle.

The more people who bicycle, the more we all benefit. Local governments must invest in connected, comprehensive, and accessible bicycle networks, especially in the areas that will benefit most. We’re facing a climate crisis and need all of the clean transportation solutions we can get. Good thing that these solutions will also improve traffic, our health, and our safety. We can make our communities healthier, more sustainable, and equitable. Let’s get those bike networks!

Cutting pollution with clean fuels: a top climate priority for Washington
Seattle's Proposition 1: Yes to transit!
We've got to talk. About climate.
Roads ahead for clean transportation in Washington