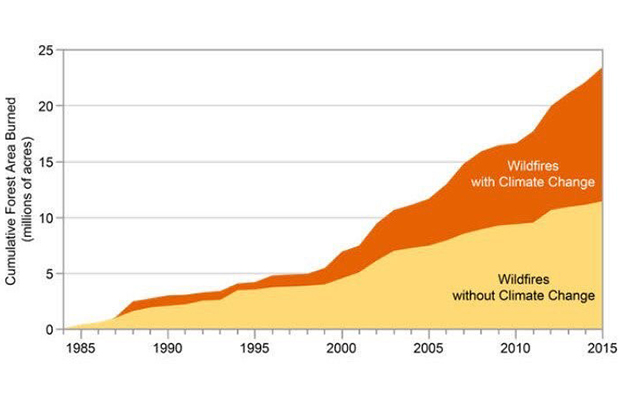 What we're in for (unless we act fast)
Vlad Gutman-Britten
December 4, 2018

On the day after Thanksgiving, while most of us were still struggling with tryptophan-induced drowsiness, the Trump Administration published the fourth iteration of the National Climate Assessment. Thanksgiving Friday is traditionally a slow news day, when new information gets lost in shopping and familial squabbling. The President’s climate denial runs deep, so it’s no surprise that he would want to bury this report—its conclusions are as stark as they are detailed and well sourced.

In some ways the Fourth National Climate Assessment doesn’t say anything we don’t already know—climate change is real, the evidence is overwhelming, and it will get substantially worse barring concerted and committed action by business, our governments, and individuals. But the specificity of the conclusions makes extremely plain some realities many of us have intuited already. Climate change isn’t just about harms we will experience when we get older, or burdens our children will have to bear long after we’re gone. It is those things, but it’s also here today—in the form of more dangerous wildfire seasons, extreme weather, and multiple risks to rural economies, subsistence communities, the urban poor, and communities of color.

The new report goes into detail on how climate change is predicted to affect different regions of the country—in measures of public health, environmental stability, and economic security. And our corner of the country, which we often think of as an evergreen redoubt from problems facing other regions, is certainly not immune from the bad news.

Our natural resources, and all who depend on them, are in harm’s way

In the northwest, we’re already experiencing serious challenges to rural and natural resource industries—agriculture, forestry and fishing. Combined, these sectors support 560,000 jobs in Washington and Oregon, and account for approximately 10% of total sales revenue across both states. Another $51 billion and 451,000 jobs are at risk in outdoor recreation in the region (including Idaho). Warming conditions threaten the health and resiliency of our forests and our salmon populations; drier conditions may threaten the health of our livestock and farms.

Our infrastructure was designed for a climate that no longer exists

Our infrastructure—roads, rail, our electric grid, stormwater systems and more—were designed with certain types of heat stress, precipitation and other factors in mind. But human-caused climate change has turned constants into variables, and we can no longer count on long-term investments made over the decades to hold up to changing circumstances.

Hydropower, a basic pillar of our region’s energy system, relies on steady supplies of winter snowfall followed by meltwaters that power our homes and economy. The new National Climate Assessment and its antecedents project deep reductions in snow water equivalents[1]—up to 90% by the end of the century—that could severely limit our ability to rely on a resource that provides 65% of Washington’s electricity. All of that generation would need to be replaced. Sensitive forests also mean that transmission lines become unreliable—PG&E in California had to shut down a number of lines this year to prevent fires, and yet many of the deadly blazes were still the fault of the utility. Now the company could be on the hook for nearly $12 billion in damages.

Increased incidence of landslides will lead to more road closures and shutter commuter rail. For example: in the 95 years ending in 2008, there were fewer than seven landslides a year impacting service on Amtrak Cascades. Between 2009 and 2013, that average grew to 60.

As climate scientist Katherine Hayhoe and climate and wildfire researcher Leroy Westerling have discussed on Twitter, wildfires attributed to climate change are now responsible for half of all forest acres burned. Scientists’ ability to so directly quantify and attribute climate change-induced wildfires is significant, especially as wildfire threats are the way many Westerners most tangibly and personally experience the impact of global warming. These terrifying events are becoming a new normal as the Northwest’s skies are now annually choked with smog, as more than 80 people recently lost their lives in California, and as rural lives and livelihoods hang in the balance with each coming fire season.

Tribal Communities, communities of color and the poor will bear the brunt of the impacts

Just as decades of fossil fuel-industrial development have harmed some ecosystems and local regions more than others, the threats caused by climate change fall unequally. People who face the worst and fastest harm include those that rely on subsistence farming and fishing such as tribes and historically disenfranchised communities with polluting factories and roads bulldozed through their neighborhoods. In our region, communities on the front lines of climate chaos—including tribes, low income communities and communities of color—will experience impacts that will be magnified by historical reduced access to public services, healthcare, and the social safety net.

Despite these unequal harms, however, the new Climate Assessment found that the “social and cultural cohesion inherent in many of these communities” can give otherwise disadvantaged communities tools for resilience. The Assessment names Seattle’s Equity & Environment Agenda and the Portland-Multnomah Climate Action through Equity report as efforts that can guide public efforts to partner with and empower those most impacted by climate harms. The Assessment also notes that action to slow climate change can also help make pollution-impacted communities cleaner and healthier.

As Washington State residents saw during our most recent electoral season, opponents of climate action are very willing to claim that it is they who are most concerned about poorer communities. Climate action, they claim, is expensive and will raise costs on those that can’t afford it. To be clear—there is plenty of evidence that this is flat-out wrong. For example, Washington State’s Deep Decarbonization Pathway study found that a low carbon economy will cut household energy spending by as much as $96/month. But even if a clean energy transition came with significant costs, it turns out that a warming climate itself will increase energy spending. The new national Assessment found that, without a course change energy expenditures could increase nationwide by 18% by 2040. If we act aggressively to curb global warming, that increase can be held to less than 2%.

Without aggressive action, southeast Washington and northeast Oregon will see energy spending climb. West of the Cascades, energy spending might remain stable if we can keep relying on our hydropower system—but we cannot. And of course, none of this takes into account the costly infrastructure retrofits and improvement needs highlighted above which will also drive increased costs. Finally, because all climate factors compound one another, water scarcity will challenge the operational requirements of thermal power plants, including renewable ones like geothermal and biogas facilities.

All of this leads to the same place. Over and over again the Fourth National Climate Assessment draws the same conclusion—we’re feeling the effects now, it will get worse, but we can lessen the impacts and preserve a livable world if we take seriously the imperative for action. That’s as true for the Northwest as it is for other parts of the country.

We can see that we’re driving towards a mighty storm. Other ways forward are available to us, right now. Will we choose to turn the wheel?