Making a little noise about the climate

While hundreds of thousands of folks converged on New York for the People's Climate march on September 21, a couple dozen gathered at a local park in Longview, Washington last Sunday.   One guy brought his tin garbage can lids.  A woman brought her squeezebox.  There was a flute, a Tibetan singing bowl, some chimes, a kazoo, and a bicycle horn.  Some of us howled like wolves.

For 350 seconds a small group made noise in the heart of a small town that is in the heart of the beast – a place cited for a huge coal export terminal on the Columbia river.

We had, of course, hoped for a bigger crowd.  Event organizer, my friend Margaret Lapic, had encouraged our congregation to come out saying, “We need everyone to change everything.”

Of course “everyone” was not there.  At first it felt kind of lonesome, and I found myself counting the people who weren’t present.  But as we whooped and rang and banged and tooted, there was a crazy sense of joy at being exactly where we needed to be, sharing in a global energy, offering our noisy prayer to the cosmos, and our protest to the power of despair.  I felt something lift from my shoulders.  Was it the weight of silence, or seriousness, or fear?

We can’t waste time being discouraged when there is noise to be made.  Those bells and whistles gave me courage, as well as a good laugh.  And they connected me across the continent and around the world with all the others who are calling for change. 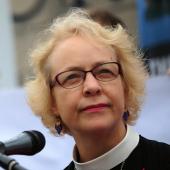 Rev. Kathleen Patton is Rector at St. Stephen's Episcopal Church in Longview, WA. She has said that she never thought of herself as an environmental activist, but she has been a vocal opponent of plans to expand coal export facilities along the Columbia River, as well as a fierce advocate for her community and for climate action.