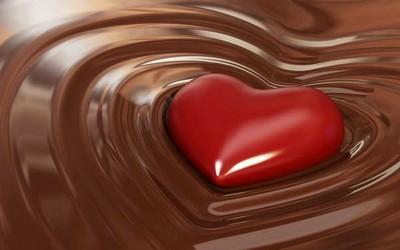 Who knew that oil and chocolate had anything in common beyond their color?

Many observers tracking the climate impacts of human industry have noted this horrifying irony: as Arctic ice melts because of global warming, oil companies are vying to drill for oil reserves once inaccessible because they were locked under the ice.  With rising temperatures, it’s easier to get to the oil.

So what does chocolate have to do with oil?

While chocolate production has a vastly different carbon footprint compared to that of oil, candy manufacturers are faced with a shortage of cocoa because of climate impacts.  Hotter temperatures and changing weather patterns along the thin equatorial strip where “chocolate trees” grow means a decrease in cocoa.

With less cocoa around, there is now a drop in the cocoa butter needed to make chocolate.

The chocolate industry’s solution to less cocoa butter (and to avoiding trans fats on their food labels)?   Sneak palm oil into those cheaper chocolates!

Why should we care about palm oil?  Because it’s leading to more deforestation of tropical rainforests, and threatening orangutan populations. The globe needs those lush, thick rain forests needed to suck up more carbon pollution. Furthermore, many international palm oil producers have been charged with grave human rights violations.

As with petroleum, there are culinary alternatives to palm oil. Groups like Rainforest Action Network are also leading a charge for sustainability produced palm oil.

More broadly, we have a choice between contributing to negative feedback loops, or, instead, creating a better, virtuous cycle.  Drive less and eat less chocolate?  Yes, I’ll hop on the bike or bus more, and ditch the cheap sweets a little more often.  But I’m not proposing that that virtuous cycle will be what’s needed.

We need to take the reins back from the companies most concerned with their quarter-to-quarter earnings, if they remain content to fiddle (or more accurately, to drill and chop) while the earth burns.

It’s the Keystone Principle that my colleague KC Golden maps out so well:  First, stop making the climate crisis worse. Then, we can WIN the fight for a livable with less oil and more sustainable chocolate.