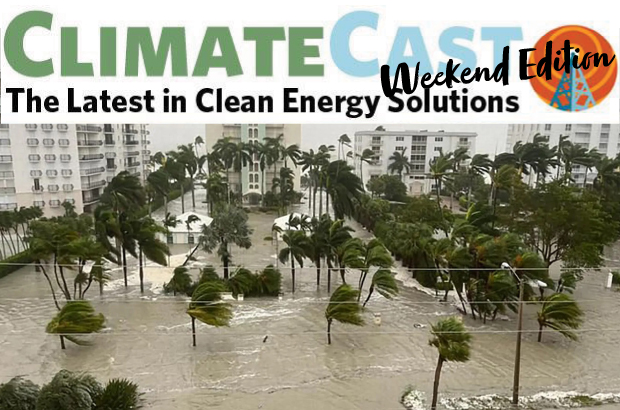 We took a week off from our bi-weekly Climate Cast summary and are now back with this special weekend edition to catch up on some of the most recent climate and clean energy news. With recent climate impacts happening across the country, we've provided a feature on how you can support some of the local communities' recovery.

Autumn brings no ease with impacts

The official start to fall unfortunately did not put an end to hurricane season for the Atlantic. Florida experienced one of the worst hurricanes in state history, including record flooding and storm surges and more to come for the Carolinas. Scientists have pointed out that Hurricane Ian was fueled by climate change, adding more rain and strength to the storm. Low-lying Gulf Coast, shore-hugging communities near Tampa are considered some of the worst places in the world for increasing threats of storm-surges, bigger and wetter storms and rapid intensification of hurricanes.

Meanwhile, every state has experienced fires this year and Washington communities near the Bolt Fire continue to experience extremely unhealthy air conditions from wildfire smoke.

There is a massive methane gas leak from the Russian Nord Stream pipeline to Germany that is releasing large amounts of methane into the atmosphere and leading to urgent concern of the added climate impacts. Growing science on the climate impacts of methane gas show that burning gas inside can be worse than smog. This data, combined with the rising costs of fossil fuel due to Russia’s war on Ukraine and other global unrest, means that more jurisdictions are seeking to move away from gas as an energy source—including for heating and cooling. Last week, California regulators voted unanimously to create first-in-the-nation rules to require all-electric appliances for heating and hot water.

Oregon now has the strongest clean fuel standard in the country

Last week, the Oregon Environmental Quality Commission voted to expand the state’s Clean Fuels Program making the new rules the strongest in the country. The new rules will reduce the carbon intensity of transportation fuels in the state 20% below 2015 levels by 2030 and 37% below 2015 levels by 2035, by requiring that fuel suppliers import more biofuels, such as those made from ethanol and recycled vegetable oils, or transition to providing other fuel sources for new modes of transportation, such as electricity for electric vehicles. Fuel supplies can also offset some emissions by buying carbon credits from electric utilities and communities who will see benefits through special programs for cleaner vehicles, including electric school buses.

As Climate Solutions’ Victoria Paykar noted in a coalition news release: “This summer’s record-hot temperatures, heat waves, and soaring gas prices reminded us to keep pushing on climate action and accelerating towards local cleaner fuels to power how we get around in our communities. With the transportation sector making up Oregon’s largest share of carbon pollution, it’s been encouraging to see government agencies step up to propose climate-smart rules for our state and our lungs.”

Senate leadership pulled the "side deal" Senator Joe Manchin sought as part of agreeing to the Inflation Reduction Act, to facilitate permitting for a variety of energy projects (both clean and fossil fuel ones, yet also including new electricity transmission lines) from this week's “must pass” stop-gap government funding bill. Some progressive Democrats were concerned the side deal would enable more fossil fuels projects, especially greenlighting the controversial Mountain Valley Pipeline in Manchin's home state of West Virginia. There was also broad opposition from Senate Republicans, upset over Senator Manchin's support for the IRA. Senators from both sides of the aisle were able to come together and ratify, by a vote of 69 to 27, the agreement to join the global agreement to dramatically reduce the use of hydrofluorocarbons—often referred to as greenhouse gas “super pollutants.”

Down the street, the Department of Transportation sent $1.5 billion (of the overall $5 billion) from the federal infrastructure package Congress passed last year to every state and the District of Columbia for electric vehicle investment dollars, including chargers that will cover 75,000 miles of highway.

Clean energy innovation round up

Washington State will spark technologies to boost batteries and to put an all-electric airplane in flight; Oregon has the first in North America combo wind-solar-battery plant; and the White House looks to floating wind turbines as one way to expand offshore wind in deeper waters.

More and more people are experiencing climate-driven natural disasters. Click the link above to learn about just a few of the many communities that could use any support as they recover from recent climate impacts.

Renewables booming, but it’s still too hot 🥵
How the West is One