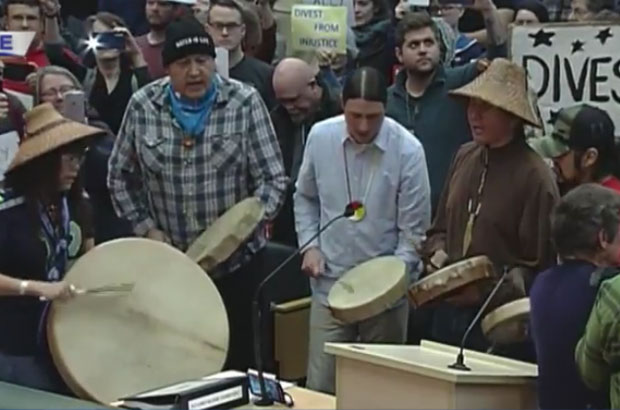 Editor's note: Headlines on Feb. 8 announced that the Trump administration was poised to give final approval to the controversial Dakota Access pipeline—possibly clearing the way for a huge increase in unneeded. backward-looking fossil fuel infrastructure. On the same day, however, the City of Seattle made history on the opposite side of debates over our energy future, using the city's economic power to say no to the financing of such irresponsible projects.

The Seattle City Council unanimously approved a measure divesting some $2.8 billion in city-controlled funds from Wells Fargo bank, making Seattle the first major city to do so. Over the years, Wells Fargo has been implicated in an impressive list of scandals and ethically questionable investments. But the issue that fueled a local divestment campaign and moved the Council towards their decision this week was Wells Fargo’s financial support for the controversial Dakota Access pipeline project in North Dakota.

Pipeline opponents have followed the lead of  the Standing Rock Sioux, whose waterways and land are threatened by the pipeline. Opposition has also focused on the threat of global warming and the irresponsibility of investing in oil infrastructure which will only hasten the climate crisis. Seattle's decision to divest from pipeline funder Wells Fargo will likely spur other cities to take similar action.

Seattle-area First Nations artist and activist Paul Che oke ten Wagner has been active in the native-led grassroots movement to stop the Dakota Access Pipeline. His comments to the Seattle City Council yesterday set the tone for the meeting at which councilmembers voted to divest. Below, his statement to the council.

O siem nu schay’la’cha nu schay’la’cha siem. Honorable Seattle City Council members. Chey’okten sen nu sna’. I am Chey’okten Paul Wagner of the Saanich First Nations. I raise my hands to each and every one of you in deep gratitude for moving this extremely important, trend-setting legislation forward.

Someday these laws of protecting human rights, racial and social equity, environmental and climate justice will benefit your children as well as create harmony and wellness for water, for all life and for all future generations.

Our ancient people prophecied these times in which we live today. They said that we would have to choose between the black road of materialism, which leads to widespread destruction, or we would choose the red road of spirituality, in which there will be a great rebirth of harmony and respect among all beings.

I have witnessed first hand how the Dakota Access pipeline profoundly represents this black road of materialism as representatives and police for DAPL unleashed unjustified extreme violence upon peaceful, unarmed women and elderly water protectors. All of that violence has been in the name of money, not people.

You are my brothers, you are my sisters, we are the human family. I trust that you will move this legislation forward into law, for the betterment of all people.

Hyswka siem nu schay’la’cha. Thank you, my honorable friends and family. Tlo’masi’sta. May Spirit make it so. 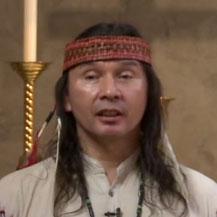