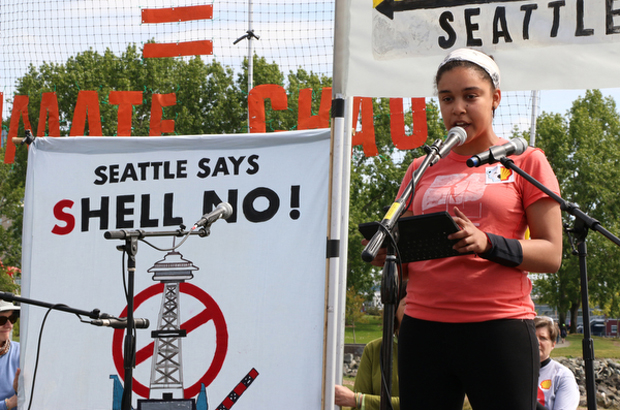 GREENPEACE
Stand up for the climate by standing up to Shell
Sarra Tekola
May 11, 2015

Remarks delivered at the Seattle says Shell No! rally, April 26.

In 5th grade I was kicked out of my classroom for calling my teacher a liar.

She had said that we had to drill for oil in the Arctic, that it was good for our national security. Even at ten years old, knowing nothing of what I now know about climate change, I knew she was lying to us. But Shell isn't smarter than a fifth grader, even knowing there is a seventy-five percent chance of an oil spill, they are willing to risk it at the expense of this planet's future. Twelve years later I have been given an opportunity of a lifetime—to be able to stand on the right side of history.

Recently, scientists determined that drilling in the Arctic is incompatible with the goal of keeping average temperatures to less than 2 degrees of warming. That means if Shell makes it to the Arctic, that’s it—we blew our internationally agreed-upon threshold.

Now, that two degree target is misleading. It may not seem like a lot, but that’s two degrees on a global average. The deviation could be plus or minus 40 degrees; in fact, the reason the world picked two degrees is because after two degrees of warming, we hit temperatures humans have never experienced before. At two degrees of warming we have an ice-free Arctic, and the seas will have risen 32 feet. That could put countries from Bangladesh to Barbados (and many in between) underwater.

Two degrees is not a safe target. At one degree of warming, America's bread basket becomes a dust bowl desert. One degree of warming will reduce global fresh water to 1/3 of what it is now. Two degrees of warming is genocide to the global south—primarily people of color. You are talking about the extension of the Sahara desert into East and West Africa through the process of desertification. 40 years ago desertification inadvertely kicked my father out of his country, Ethiopia, and that was just the beginning of it. Billions of people will forced out of their countries with no place to go.

But you cannot blame the products of a defected system. Instead, we must take down the defected system. The companies want us to blame ourselves, guilt us with the fact we all use oil, but they are the reason there are not alternatives readily accessible. Fossil fuel corporations have had a chokehold on energy, deliberately destroying any competition, buying up patents of breakthrough clean technology and destroying them! They have lobbied governments away from climate negotiations and carbon pricing, and secured for themselves higher subsidies than renewable energy receives. As long as money stays in politics, politicians will be bought by the highest bidder.

So what is the only option that is left? The power is in the people—we the people are the only ones left courageous enough to stand up to Shell. The government stamped their approval of pushing us past two degrees of warming when they approved Shell to drill in the Arctic. But Shell only has about a two-month opening during the summer to drill while the ice is melted.

And Shell made the mistake of coming to Seattle first, the city not only known for its environmentalism but also its protests. Everyone will be coming out to protest., This isn't just radicals; there are scientists, ecologists and city council members, some of whom are willing to get arrested because they understand the severity of this moment, and are not willing to let Shell destroy our future without a fight. This is the People versus Shell, and complacency equals consent. If you aren't standing up against Shell when they are here in our backyard, then you are also guilty.

We will need everyone to join us. If we succeed in raising enough hell, we can delay this project to a standstill as the people have done with Keystone XL. We will be able to look back at this moment and tell our kids - we saved the Arctic.

So tell your friends: boycott Shell, join the "artivism" and resistance. Get in a boat and join the flotilla; stand up in whatever manner you can.

This is our lunch counter to sit on, our history to be made. We hold the world in our hands. 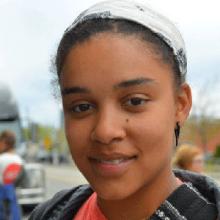 Stand up for the climate by standing up to Shell

Sarra Tekola is a student at the University of Washington, a legislative assistant with the Seattle City Council, and a climate activist. She is active in the Divest UW campaign, and volunteers with the Seattle environmental justice organization Got Green.