This week's episode focused on climate policy debates in two states: Washington and New Jersey, and specifically on how Governors Inslee and Christie are responding (or not responding) to our climate crisis.  Each time the scene switched from the Jersey shore to Olympia, Washington, I found myself more and more thankful to be living in Olympia. Governor Inslee offers a sense of hope as opposed to the despair that we saw from those living the consequences of Hurricane Sandy. My own despair grew, watching the lack of forethought in the land use decisions the state of New Jersey is making in the storm's aftermath. It seems horribly likely that much of the land under siege by Sandy will likely be under siege again soon.

And then there is the utter danger of the partisan gridlock that defines the lack of action on climate change in this country.

On the one hand…

"We're the first generation to feel the sting of climate change, and we are the last generation that can do something about it."
- Washington’s governor

Washington’s governor says, "We're the first generation to feel the sting of climate change, and we are the last generation that can do something about it."

And on the other…

When asked by a reporter, “Do you think climate change, rising sea levels, global warming had anything to do with uh, folks in this town and elsewhere?” Governor Christie responded, “Maybe, in the subsequent months and years, after I get done with trying to rebuild the state and put people back in their homes, I'll have the opportunity to ponder the esoteric question of the cause of this storm.”

What is clearly not esoteric is the threat of arguably unsafe coal trains—and now oil trains too—barrelling through our communities. A report from Sightline this week included the sobering detail that the Northwest region alone is seeing an average of nine freight derailments a month. Along with the trains comes fifty years of infrastructure allowing for the movement and combustion of billions of tons of coal, and billions of barrels of oil. And with that, more global warming, and more consequences. Yuck. Can’t you just see a different future? I can. And Governor Inslee can too.

After working with Climate Solutions and looking for climate solutions for the last seven years, I can tell you that it ain’t easy to transition ourselves to those solutions. It’s a time-intensive, labor-intensive transition that will, incidentally, create scads more jobs than moving dirty fossil fuels around. We have got to dig in and make it happen. Now. Today. 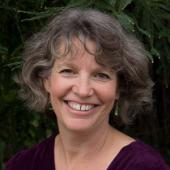