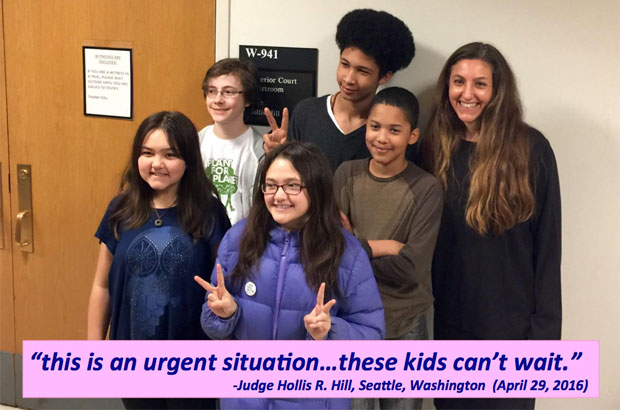 OUR CHILDRENS TRUST
Court agrees with these kids: Washington must curb pollution
Ross Macfarlane and Taylor Halperin
May 2, 2016

A group of Washington State youth known as the “climate kids” just won an important victory in their bid to force the state to protect their future from catastrophic climate change. On Friday, April 29, King County Superior Court Judge Hollis Hill issued a surprise ruling ordering the state to complete a strong rule reducing global warming pollution based on the best available science. A strong rule would require real reductions, and would not simply rely on loopholes and offsets to meet the state's obligations.

Judge Hill ordered the Washington State Department of Ecology, which had previously withdrawn a proposed rule to mitigate carbon emissions, (1) to complete an emissions reduction rule by the end of 2016, and (2) to recommend appropriate levels of greenhouse gas emission reductions based on the best available science to the 2017 state legislature. She also ordered the state to consult with the climate kids in taking these actions.

The plaintiffs, youth members of Our Children’s Trust, were represented by attorney Andrea Rodgers-Harris with the Western Environmental Law Center.

Setting the Bar: Judge Hill’s ruling sets a high standard for the new Ecology rule, which she indicated must result in actual reductions and be based on the best available science. The climate kids had introduced evidence about their concerns relating to the originally proposed rule, and insisted that the final rule set a strong precedent for future action. Last year, Judge Hill stated that the state must “preserve, protect, and enhance” air quality for future generations.  Such a duty requires state agencies to bring climate issues to the front of their agendas. While Judge Hill did not rule on the substance of Ecology’s regulations, her decision supports our call for a strong rule that relies on best practices and ensures real emissions cuts.

On a Roll: This decision comes on the heels of an equally encouraging decision three weeks ago from Judge Thomas Coffin of the U.S. Federal District Court in Eugene, Oregon. On April 8, Judge Coffin held that the 21 young plaintiffs and famed climate scientist, Dr. James Hansen could proceed to trial in their claims that the federal government was violating the public trust doctrine by failing to act on climate change.  Rejecting efforts to dismiss the case from the federal government and fossil fuel industry representatives, the court determined that the youth faced an “unprecedented” threat from “carbon pollution of the atmosphere, climate destabilization, and ocean acidification.”  Bill McKibben and Naomi Klein called this case “the most important lawsuit on the planet right now.”

And it’s not just happening here. Last summer, a Dutch court ordered the country to cut global warming pollution by 25% over five years, responding to a petition from nearly 900 citizens demanding climate action.

The new wave of decisions is happening at the same time that a coalition of State Attorneys General are joining forces to investigate mounting evidence that Exxon-Mobil and other oil and coal companies ignored warnings from their own scientists that climate change was real and instead doubled down on lobbying and funding climate denial.

History reminds us that it can take many years to break through with new legal theories for important public health and environmental issues, such as the effort to make the tobacco industry accountable for the harm that it was causing. The climate kids, and their allies around the world, are standing up for their own future. Their courage provides and important wake up call to all of us to stand with them.

Taylor Halperin is a Climate Solutions intern and a student at the University of Washington School of Law.