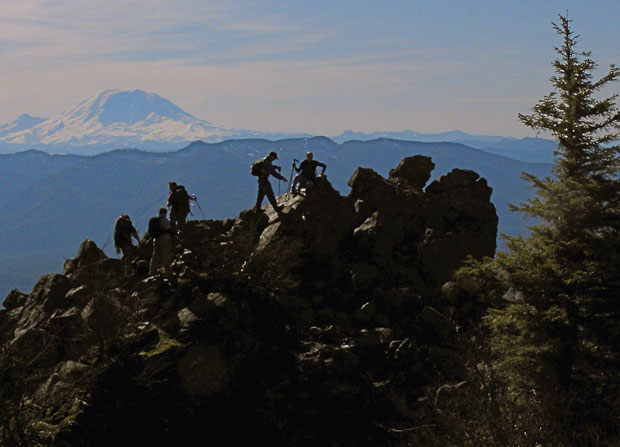 If the oil industry is attacking us, we must be doing something right—but the reality sure is hard.

Both in Oregon and Washington, fossil fuel lobbyists upped their game this year. They’ve worked to block progress on climate action, stall alternative fuels to power our vehicles, and transport more oil through our communities. It’s as if we are hobbits and elves midway along a righteous quest in The Lord of the Rings—and we feel the burning Eye of Sauron now drawn more intensely towards our path.

In the legislative sessions that just ended, we saw the fossil fuel industry crank up its lobbying, run paid ads, spread misleading information, file spurious lawsuits, and attempt to divide broad coalitions calling for climate progress. They are trying all they can to avoid being held accountable to the same rules that the rest of us follow to keep our region clean and green. We now know that big oil companies have known for decades that their product is responsible for catastrophic global warming—but that hasn’t stopped them from redoubling their efforts to preserve their monopoly.

They blocked us in many ways. But probably the biggest fight was over our efforts to protect community health by creating and expanding clean fuel choices. Oil industry lobbyists pulled out all the stops and convinced their allies in both state legislatures to present a false choice—pitting transportation funding against clean air and clean fuels.

Despite oil industry opposition, the Oregon Legislature made great progress early in this year’s session when, after several years of trying, it finally lifted the expiration date on its Clean Fuels program. But the battle didn’t end when Governor Brown signed the state’s program into law. Climate Solutions, our partners and allies had to rally once again to protect the program after a late-session effort to pit a transportation package against clean air and repeal it. Thanks to a strong show of leadership in Salem standing up to big oil, Oregon rejected this false choice and preserved our Clean Fuels program.

Washingtonians: take the pledge and support the Alliance for Jobs and Clean Energy!

In Washington, we suffered a significant legislative setback. The legislature's final transportation package included a “poison pill” pitting the Governor's authority under the Clean Air Act  to provide cleaner alternatives to petroleum against specific funding for transit, bike and pedestrian infrastructure. Governor Inslee agreed to sign the transportation package despite his strong objections to this provision because of his belief that we urgently need transportation investments. He is still considering whether to move forward with rulemaking on clean fuels. We all agree that the people of the state want—and need—both cleaner fuels and funding for transit, bicycle, pedestrian and other transportation alternatives.

We were also unable to pass meaningful legislation to account for the cost of pollution. In both states, advocates of climate progress built momentum for limiting global warming emissions. A couple of significant, positive bills failed to win passage, but not without powerful showings of support which bode well for the near future. Hearings on climate and clean energy-related bills in both state legislatures were attended by standing-room only crowds, and featured strong testimony from business leaders, communities of color, public health advocates, faith leaders and others.

In Oregon, our community is well postitioned to advance the Climate Stability and Justice Act in a future session; the bill would enforce Oregon’s existing greenhouse gas reduction goals and require the state to create market-based mechanisms to achieve needed reductions. Washington State’s Carbon Pollution Accountability Act did not advance beyond committee hearings, but a broad and growing constituency demonstrated impassioned support for the policy. Jeff Johnson, president of the Washington State Labor Council, called it “probably the most important bill I will ever testify on.”

In the midst of the challenging dynamic of the legislative fights, there were some clear bright spots for policy solutions in both states this session. For example:

Two clean energy bright spots in Washington were a $40 million Clean Energy Fund extension in the capital budget and fighting back special interest attempts to weaken the people’s Clean Energy Initiative: I-937. This popular program has continued to increase renewable power and investment in Washington since its passage in 2006—despite repeated attacks in the legislature. In both states, voters have consistently shown that they support investments in clean energy like wind and solar.

Ironically, in the final days of the legislative sessions we experienced some of the hottest weather ever for this time of year. With stranger, hotter, drier weather, drought, and an earlier-than-expected wildfire season, we are already witnessing and experiencing climate change impacts. Our campaign’s slow progress, amidst the climate impacts happening around us, can sometimes provide fuel for discouragement.

But, in reviewing what we’ve achieved together this year, I have so much hope. I am optimistic that, as with many other critical social change issues, we can see the long arc of our story bending towards accomplishment—towards victory. And as with the hobbits and elves, it will take more than one small band of advocates to complete our quest. It will take a broad and diverse coalition to fight back and, ultimately, win. And that is where I find hope. Our coalition is assembled and getting stronger every day—ready and already fighting for the people.

While the oil industry’s influence amped up this year, our own influence as a broad-based movement is poised to power up as well. Our voices showing up and speaking out this year included allies from health, faith communities, business, labor, tribes, social justice groups, and people from across the region. That’s a new development which we are extremely proud of and thankful for, and a big piece of what it will take to win against the fossil fuel industry and their allies. We can advance climate solutions at the scale and speed we need to address the climate crisis. The hobbits, elves and our other allies have left on our quest —but this story has chapters yet to be written, and fights yet to be won.