A chronological archive of research and reports from Climate Solutions 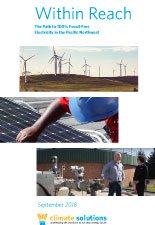 Within Reach (September, 2018)
The path to 100% fossil-free electricity in the Pacific Northwest. New research confirms that phasing out fossil fuels while phasing in non-fossil sources of energy can provide clean, reliable, affordable power to the Northwest. Transitioning to 100% fossil-free electricity will also avoid risky investments in infrastructure that will cause the region to exceed its committed carbon goals. 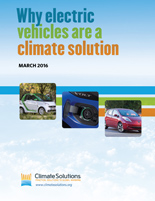 Why Electric Vehicles are a Climate Solution (March, 2016)
Electric vehicles are entering mass production faster than any other technological fix for our oil habit, and they have a much lower climate impact than oil-powered cars. While EVs excite aficionados, it’s worth examining what kind of difference EVs would make for the climate, and whether they pose a challenge to utilities charged with supplying the necessary electricity. 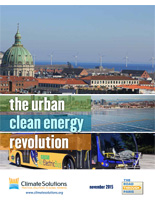 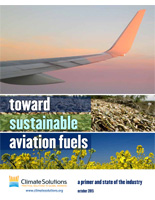 Toward Sustainable Aviation Fuels (October, 2015)
Commercial aviation accounts for 2 percent of global carbon pollution, a figure projected to grow to between 3 and 4.7 percent by 2050 without concerted action to curb emissions. Accordingly, a comprehensive solution to the world’s climate predicament requires a strategy to reduce aviation’s carbon footprint. Industry leaders recognize this imperative and accordingly have set a goal of reducing the sector’s carbon emissions 50 percent by 2050. 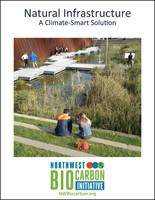 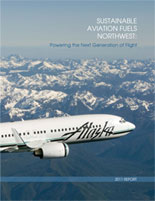 Sustainable Aviation Fuels: Powering the Next Generation of Flight in the Northwest (2011)
Reflecting the perspectives of more than forty stakeholders involved with Sustainable Aviation Fuels Northwest, this report assesses current trends in aviation fuels and supply chains in the context of regional biomass technologies and feedstocks. The report concludes with priority policy action steps to create a sustainable aviation fuel industry in the Northwest. 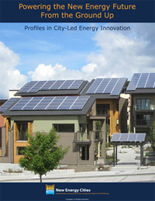 Powering the New Energy Future from the Ground Up (July, 2012)
This report examines the progress of a range of small- to medium-sized American cities that are pioneering the clean energy economy. These city-led efforts to catalyze local clean energy economic development are important to watch as federal grants sunset, especially in the absence of a comprehensive national energy or climate policy.

Building the Biocarbon Economy (2010)
The biocarbon paradigm aims at leveraging plant growth and rich soils to halt the accumulation of carbon dioxide in the atmosphere and then to achieve a global turnaround. By making nature a climate ally humanity can actually begin to draw down carbon dioxide toward levels that prevailed before we began massively consuming fossil fuels. This is a series of briefings on biocarbon, specially focused on how the Pacific Northwest can mount regional initiatives to accelerate biocarbon progress. 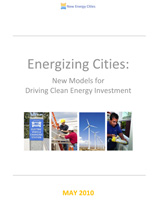 Energizing Cities: New Models for Driving Clean Energy Investment (May, 2010)
A guide for local elected officials, county and city staff, energy utility managers, and community stakeholders to the steps that must be taken in designing and financing clean energy programs. This document describes how to develop, implement, and finance a clean energy program and offers examples of existing innovative clean energy financing models and useful resources to consult when developing a clean energy strategy. A joint project with Pareto Global, the University of Oregon Center for Sustainable Business, and ShoreBank Enterprise Cascadia. 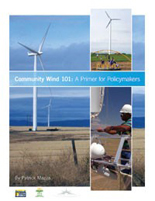 Community Wind 101: A Primer for Policymakers (2008)
A new model for wind development is emerging – community wind – in which local ownership plays a major role. Rural landowners, consumer-owned utilities, school districts, colleges and native tribes are putting installations on the ground ranging from single turbines to wind plants with hundreds of megawatts of capacity. 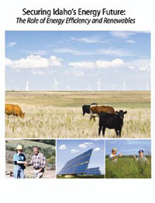 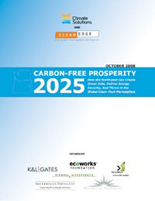 Carbon-Free Prosperity (2008)
In Carbon-Free Prosperity 2025, we highlight how Oregon and Washington can create green jobs, deliver energy security, and thrive in the global clean-tech marketplace. In a fiercely competitive environment, the Northwest is already leading in a number of critical and emerging clean-energy segments. 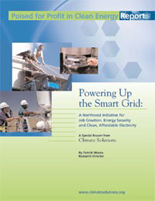 Powering Up the Smart Grid (2007)
A host of new smart energy devices and systems are emerging that can take pressure off overloaded grid infrastructure and power costs,dramatically improve grid reliability and security,and accelerate the growth of cleaner power generation. Smart energy is the application of digital information technology to optimize the electrical power system.

Sustainable Biofuels (2007)
Cellulosic biofuels offer tremendous environmental and economic sustainability advantages. They can be produced from organic residues that are now often a waste management and pollution problem. 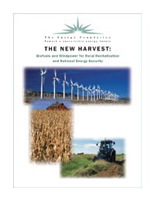 Farm Groups Pushing for Renewable Energy Standards (2004)
Regional and state farm organizations are actively engaged in the push for state renewable energy and fuel standards. Already, sixteen states have enacted standards to grow markets for renewable electricity. Farm organizations, by representing the common voice of agriculture, have tremendous influence that can make all the difference in growing the renewable energy economy 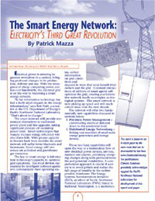 The Smart Energy Network: Electricity’s Third Great Revolution (2003)
Electrical power is entering its greatest revolution in a century, one that compares to Thomas Edison's creation of the world's first electrical grids and George Westinghouse's origination of long-distance power transmission. In prospect are profound changes in the ways electrical power is produced, delivered and used. 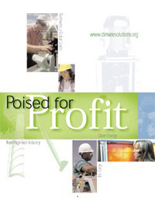 Poised for Profit (2001, 2003)
The reports in this section examine global markets for clean energy and prospects for developing a competitive, export-oriented clean energy industry in the Pacific Northwest. 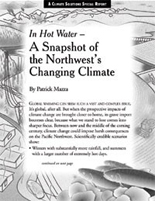 Global Warming (1999)
By burning fossil fuels – coal, oil and natural gas – and cutting down forests, we are releasing gases that are thickening a heat-trapping blanket around the Earth. Learn more about how fossil fuel use is affecting our planet from this pair of reports.