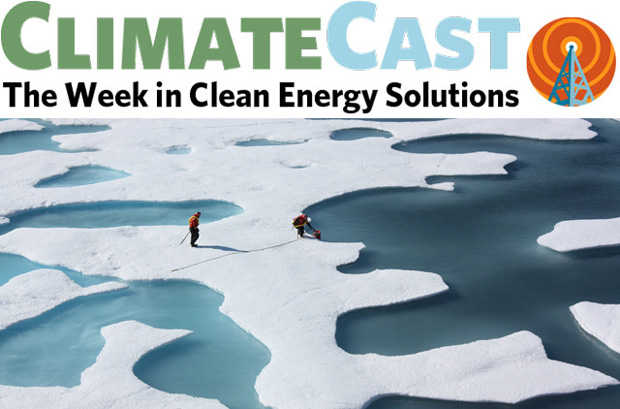 Costa Rica’s electric grid was powered entirely with renewable energy for the first two and a half months of this year, leading the utility to seek a rate decrease to share the fuel savings with customers. Two days’ drive north, Georgetown, TX’s municipal utility contracted for 150 MW of solar power that will come on line next year, making its electricity supply 100 percent renewable; a new study found that Canada could achieve that same goal by 2035. These goals sidestep the climate impacts of goods produced elsewhere—which can substantially reduce a country’s apparent gains in cutting carbon pollution, according to this study of the UK.

The federal government will cut its climate pollution by 40 percent in the next decade and obtain 30 percent of its energy from renewable sources, according to an executive order signed by President Obama last week. The news came as the Federal Emergency Management Agency announced that states seeking disaster preparedness aid will have to plan for climate change, a requirement that may pose a dilemma for denialist Republican governors of Florida, Louisiana, and North Carolina. On the supply side, the Interior Department announced regulations for hydraulic fracturing on public land, but the administration came under fire for ignoring the climate impact of fossil fuels extracted from federal territory.

The phenomenon that must not be named or funded

A Florida state environmental protection employee received a formal reprimand for including climate change in notes from a meeting and was sent home to return only after a mental health evaluation, while students delivered petitions with more than 43,000 signatures demanding an investigation of the gag order against public servants mentioning “climate change” or “global warming.” In apparent conformance with that directive, the Florida governor’s top aide managed to testify before the Legislature about funds relating to floods, tornadoes, and hurricanes without using the phrase ‘climate change.’ At the federal level, House Republicans offered a budget that would cut funds for CIA and Defense Department global warming programs.

McConnell launches a war on the ‘war on coal’

Senate Majority Leader Mitch McConnell last week sent all 50 governors detailed suggestions of how to resist the Obama administration’s efforts to regulate carbon pollution from power plants. McConnell’s allies include Harvard law professor and former Obama mentor Laurence Tribe, now in the pay of Peabody Energy, who claims the rules are unconstitutional—a view rebuffed by two Harvard colleagues and roundly criticized by an Obama adviser and spokesman. Other provisions of the Clean Air Act have reduced smog in southern California, which has increased the lung growth of children growing up there, according to research published this month in the New England Journal of Medicine.

The Arctic ice pack peaked this winter at its smallest area on record, leaving the southern edge of Bering Sea ice 100 to 200 km farther north than average. The retreat is linked to worldwide warming that saw February mark the 360th consecutive month during which global temperatures were higher than the long-term norms—norms typically set according to 30-year averages, which are now entirely skewed by the warming climate. Near the opposite pole, new research revealed new vulnerability to the East Antarctic ice sheet, as deep undersea canyons bring warm ocean waters in contact with the underside of the floating ice shelf.

The Guardian presses charities on divestment

The Guardian launched a campaign last week calling on the world’s two largest charities to divest from fossil fuels, as readers of the paper’s website discovered when they visited; more than 100,000 had signed by week’s end. Although the Gates Foundation disposed of its stake in Exxon Mobil for $766 million, it still held $1.4 billion in coal, oil, and gas shares, while the Wellcome Trust’s investment totaled over half a billion. On the other side of the ledger, 22 top European firms called on the EU to focus on low-carbon investments in energy infrastructure, and South Africa’s largest pension fund sank $130 million into a 200 MW solar project.

Urban land would be enough for a solar-powered CA

Urban California could accommodate enough solar photovoltaics and concentrating solar collectors to power that state several times over, according to a Stanford study published last week in Nature Climate Change, without any need for energy projects in wildlands. Coincidentally, the paper was published the same week that France adopted a law requiring that new commercial roofs be partially covered with solar panels or greenery. The green roofs would ease the urban heat island effect, which could also be reduced by replacing gas-powered vehicles with EVs, according to Chinese and Michigan researchers, who found that switch would have reduced Beijing’s summer temperature by almost 1 degree C.

A Colorado biofuels company received funding last week for a $200 million refinery in Oregon that will produce 12 million gallons of jet fuel annually from 140,000 tons of sawdust, tree branches, and pine needles, while 18 northern California locations will offer renewable diesel fuel refined from recycled animal grease and vegetable oils to create a fuel that is 70 percent less carbon intensive than regular petroleum diesel. The diesel feedstocks come from Vietnam and Australia and are refined in Singapore. So-called “green diesel” makes up less than 1 percent of all diesel fuel burned in America; US green diesel imports dropped 40 percent in 2014.

In a non-event reminiscent of Y2K, European power grids weathered a solar eclipse last Friday without disruption to the continent’s electrical supply. Analysts had worried that the eclipse—obscuring 80 percent of the sun’s disk over central Europe—would make it hard for grid operators to keep supply and demand in balance as solar output plummeted then skyrocketed much more sharply than at dusk and dawn. Apart from a brief surge in the price of power, the greatest impact may lie in calling public attention to the minutiae of frequency fluctuation that grid operators must track.

On the Climate Solutions blog: Marlyn Twitchell argues the case for the Washington State Legislature to maintain existing tax incentives for electric vehicles; Ben Serrurier describes why a bill put forth by the Washington State Senate should be stopped because it would undermine the state’s renewable portfolio standard; Joelle Robinson calls for action to support the Lummi Nation’s treaty rights to fish the Salish Sea by demanding that the Army Corps of Engineers deny an coal export proposal in Whatcom County; and guest blogger Patrick O’Herron, a board member of Oregon Physicians for Social Responsibility, describes the health and economic benefits that would result from transitioning from coal to clean energy in Oregon.