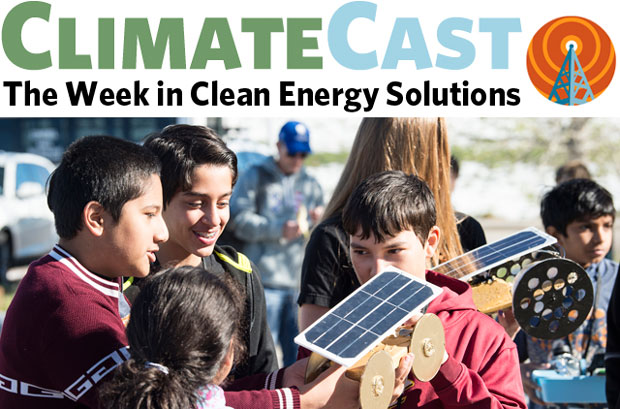 Cities, states, & biz to Trump: We will always have Paris

The groundswell of climate commitments grew last week, in reaction to President Trump’s plan to withdraw the US from the Paris climate accord. Spearheaded by the governors of New York, California, and Washington State, the US Climate Alliance rallied 12 states (including Oregon) that vowed to achieve their share of the climate pollution cuts agreed to in Paris in 2015. Hawaii passed legislation adopting those same objectives, and Calif. Gov. Jerry Brown traveled to China, where he talked climate policy with President Xi Jinping and concluded a green-technology development agreement. More than 1,400 US cities, businesses, universities, and states joined the We Are Still In coalition to pursue the climate-stabilizing aims of the Paris pact, although the absence of high-polluting states such as Texas and Pennsylvania may limit its reach. Numerous cities in those states have signed on, including Pittsburgh (which Trump misleadingly implied would not want to pursue the Paris goals). Many others have enacted climate-friendly policies that put them on the forefront of climate action, including Portland and Multnomah County, which committed this month to run entirely on renewable energy by 2050.

Paris withdrawal sets up US loss of talent, leadership

Even as EPA chief Scott Pruitt ditched the end of the G7 environmental ministers’ summit and abstained from their climate communiqué, President Trump’s desire to leave the Paris agreement was stalled by the terms of the accord, which bars any countries from exiting until 2020. Nonetheless, the US intention to quit Paris opened a vacuum that other countries rushed to fill, with China seeking the lead in clean energy technology, and forging a new partnership with the EU. French President Emmanuel Macron taunted President Trump with the slogan, “Make Our Planet Great Again,” and even set up a website to recruit climate researchers to move to France. On the policy level, Macron is lobbying Germany to set a minimum price of 30 euros per ton in the CO2 permit auction, about six times the current market price, which would further accelerate the clean energy transition in Europe.

In a world where the GOP has united against climate action (a major shift from a decade ago, as this article documents), attitudes about climate are a reflection of tribal identities, instead of the rational, fact-driven approach that David Roberts describes as cosmopolitanism. So it’s fruitless to ask politicians what they believe about climate, Roberts argues, as their rationalizations can shift endlessly. Instead, ask them what they intend to do about it. Americans are subjected to a flood of disinformation on climate issues, but some researchers believe that it’s possible to “inoculate” them against it by highlighting the self-serving motives of the disinformers. Teachers stand on the front lines against dismissive attitudes toward climate change, and have had varying degrees of success in Idaho and Ohio classrooms in bringing students face-to-face with discomforting evidence, even when challenged by a new crop of deniers-in-training.

You’ve heard it before: Clean energy is accelerating

The US solar sector grew 12 percent last year, creating jobs 17 times faster than the American economy as a whole, says a new report from the International Renewable Energy Agency. Renewable energy now employs some 800,000 Americans, including many in red states, five of which lead the US in the fraction of electricity generated by wind. In Nevada, lawmakers passed a bill to restore net metering, whose cancellation in 2015 had led to an exodus of solar installers from the state, and whose revival should now bring them back. The bill will gradually reduce the net-metering rate from 95 percent to 75 percent of full retail prices, but will lock in those rates for 20 years. Utility-scale solar continues to get cheaper, too, with the industry association reporting the first-ever installations for less than $1 per watt.

Electrify this! End of the road for gas

In the US—one of the top three global markets for EVs, after China and the EU—the climate benefits of EVs increased again, as the Union of Concerned Scientists found that a cleaner grid has cut the greenhouse impact of EV driving to the equivalent of a 73-mpg gasoline car. The global fleet of electric vehicles surpassed 2 million cars in 2016, according to a new International Energy Agency report.  Los Angeles moved to spread the EV advantage more widely last week when the city launched an electric-car-sharing program that is subsidized for low-income residents, funded in part with carbon auction revenues. Elsewhere in the Golden State, southern Californians earn a $450 utility rebate for buying an EV; in the north, Pacific Gas & Electric completed an experiment where it paid BMW EV owners to delay charging their vehicles as a way of reducing peak demand. Nor are hydrocarbons becoming obsolete just for transportation: the Dutch announced plans to disconnect 7 million homes from gas over the coming decades, relying on electric heat pumps and district heating instead.

Coal kills … and it’s on the brink of death itself

Every year, air pollution from coal burning kills more Americans prematurely than work as coal miners, Michigan Tech University researchers estimate in a new paper published in Renewable and Sustainable Energy Reviews. The study found that 52,000 people die early each year as a result of coal-caused air pollution, versus 51,000 who mine the black mineral. In the short term, the coal industry continues to be battered by low prices for its main fossil competitor, gas-fired electricity, while inexpensive renewable power means that “coal is dead,” said an executive from the mammoth investment firm BlackRock. In the Northwest, Puget Sound Energy has built early-exit provisions into its proposed coal contract for the Colstrip plant in Montana, a town that is feeling the pangs of coal’s decline. With President Trump’s suspension of the Obama Clean Power Plan, the town is left without the transition funding that the previous administration had proposed.

What will it take to roll back the blanket of gases that are warming the planet? Author Paul Hawken and a team of modelers tried to answer that question by ranking 100 solutions in order of their potential to cool the planet. Their menu of strategies include the familiar, such as wind power and LED lighting, and the outside-the-box, such as reducing food waste and ensuring that girls have equal access to education. You can match your instincts against their sophisticated models in this New York Times quiz, a climate-focused version of “Which would you rather?”

Note to readers: It has been a great privilege to serve as the editor and principal writer of ClimateCast since its inception in July 2014. I am stepping down after this issue to accept the post of executive director at the Northwest Natural Resource Group, a Seattle-based non-profit focused on sustainable forestry and its role in local economies. Even in my new capacity, I expect to continue tweeting at least occasionally about energy and climate. A big thank-you to the whole team at Climate Solutions, especially Eileen V. Quigley and most recently Kimberly Larson, who will continue to oversee the production of ClimateCast under new editorship that begins with the next issue on June 26.