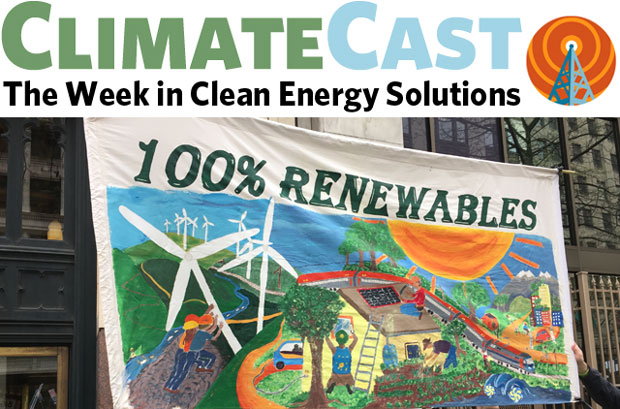 Clean energy spreading across the US

Clean energy leadership has spread to over a dozen states, depending on how it is measured, according to a new report from the Union of Concerned Scientists. While many of the usual leaders such as the Pacific Coast, New England, and Hawaii topped the overall rankings, states such as Kansas, Iowa, and South Dakota excel at specific metrics. Jobs in clean energy production account for more than a third of all employment in power and energy production, exceeding the total for gas and coal combined, and rooftop solar arrays serve households at a wide range of income levels, though they are still somewhat more common in the upper-middle-income brackets. In Hawaii, rooftop solar is actually the most prevalent source of clean energy, and on the Big Island, clean power supplied more than half the grid’s energy last year for the first time. Another clean energy leader, Denmark, announced last week that it foresees an end to subsidies for renewable sources “in a few years”—a position backed by leading wind firm Vestas.

Hundreds of thousands took to the streets last weekend in marches for climate action and climate justice in over 300 locations around the world. The largest crowd of 200,000 surrounded the White House in Washington, DC, where they braved 91-degree heat that tied the daily temperature record. The climate events came just one week after the Earth Day March for Science, which encompassed more than 600 marches across the globe (including Seattle and Portland) in support of scientific inquiry and its fair application to public policy, and prompted an outpouring of creative signage. The US support for science drew reminiscences from one Canadian, who recalled having to mount a similar defense during Stephen Harper’s administration and hailed it as a “winning wedge issue.”

The energy world according to Trump...SAD!

President Trump’s EPA took down the agency’s pages on climate change last week “to eliminate confusion,” but in a deviation from 1984-style information management, the error page links to an archived version of the site as it appeared before President Trump took office. A different kind of confusion is hampering solar development, as uncertainties about tax cuts make it harder for solar entrepreneurs to secure tax equity financing, which accounted for $5 billion of solar investment last year. Overall, President Trump’s climate policy changes are expected to widen the gap between US emissions and its Paris commitments by about 1 billion tons annually in 2025. The president’s war on the climate won a tactical victory last week, when the US Court of Appeals agreed to delay ruling on the legality of President Obama’s Clean Power Plan, which would require power companies to emit less climate pollution. Nevertheless, a new survey of utility professionals finds they’re even more confident that they will use more wind and solar power and significantly less coal in the coming decade.

Nowhere for coal to go from the West Coast

Cowlitz County and the Washington Department of Ecology last week released their final assessment of the proposed Millennium coal shipping terminal in Longview, concluding that the project would raise cancer rates, cause traffic jams, and increase climate pollution by 2 million tons. Ten different agencies will use the report in reviewing the project’s permit applications. The Longview proposal is the last of six coal export proposals still alive in Oregon and Washington, after the other five succumbed to dogged research and public opposition, whose early history is described here by Ross Macfarlane, and which have become orphaned as Asian demand has plummeted. The only export route for western coal lies through British Columbia, but BC Premier Christy Clark opened a new front last week, calling on the Canadian federal government to ban the shipment of US coal through BC, in retaliation for a new US tariff on softwood lumber imports. Coal’s prospects are suffering, too, because of competition from renewables and gas-fired power and shifting consumer preferences: The head of Appalachian Power said last week that he won’t build new coal plants because the customers he wants to attract demand clean energy.

Before the flood, the cost of flood insurance

Coastal property’s day of reckoning with sea level rise is drawing closer, as flood insurance premiums in Norfolk, Virginia are eroding real estate values, and the expectation of tidal flooding is making it hard for some Florida homeowners to sell their houses. The market in South Florida is “pessimists selling to optimists,” according to one man who cashed out three years ago, not wanting to get caught holding the bag. That day may come sooner than expected, as a new synthesis of peer-reviewed research predicts swifter-than-expected Arctic melting. In California, snowmelt from this year’s prodigious storms is expected to cause riverside flooding, while other research shows that this year is likely to be an outlier as climate change shrinks the western snowpack. Worldwide, migration in response to climate change is expected to displace millions of people, according to a new report from Georgetown University.

Utilities are grappling with stagnant demand for electricity, as customers use power more efficiently, flattening utility revenues even as the economy grows. Diverse strategies are emerging, as firms consider expanding their power lines to accommodate more clean energy, build wind farms themselves, or craft mergers to keep profits high. Puget Sound Energy—whose biggest account, Microsoft, defected last month in a quest to power its campus entirely with clean energy—rolled out a new program for large customers to buy all-renewable power, which will come from a new wind farm in Thurston and Lewis counties in Washington. Charter subscribers include REI, Starbucks, and Sound Transit. In the mid-Atlantic region, wind and solar will be able to compete more readily in the market because they can now bid together to provide capacity to the grid, taking advantage of the tendency of wind and solar generation to peak at different times. And in the Midwest, a new start-up has put together a 400-megawatt portfolio of demand response, using a $100 internet device to modulate the electricity needs of utility ratepayers when power prices spike.

The debate over whether to debate the debaters

Further struggle over the climate narrative came last month when the New York Times appointed conservative Bret Stephens as an opinion columnist — a controversy heightened once his first column was published, leading climate scientist Michael Mann to cancel his subscription, even as the paper’s public editor defended the hire. Stephens’ maiden column is artfully disemboweled by Vox’s David Roberts, who explains why Stephens’ focus on climate uncertainties is so problematic, and by Andrew Winston, who pillories Stephens’ position that humans are causing some amount of climate change but should do little to mitigate it. As the climate shifts around us, it’s easy to fall prey to shifting baseline syndrome, in which we gradually become accustomed to new status quo — but maps like this one of San Francisco ca. 2072 can shatter that gradualist acceptance. For others, like libertarian and former climate denier Jerry Taylor, reasoned argument can lead from unfounded skepticism to constructive debate about the best kind of climate action to undertake.

Image: A banner carried at the Seattle climate march on April 29.