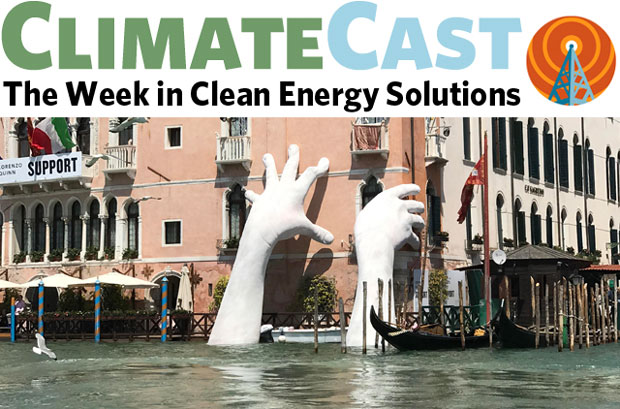 Support, by Lorenzo Quinn
Tags
climate art
Carbon pricing is on the table from C to shining sea
Seth Zuckerman
May 15, 2017

Everything you know about clean energy is outdated

The last few years have up-ended conventional assumptions about the frontiers of clean energy, Bloomberg New Energy Finance founder Michael Leibreich said a 48-minute videotaped overview of the sweeping progress renewables are achieving worldwide. Underscoring Leibreich’s point, Germany reached a milestone two weeks ago, when renewable energy briefly supplied 85 percent of the nation’s electricity needs. In the US, utility-scale solar grew at an average annual rate of 72 percent from 2010 to 2016, according to new figures from the Department of Energy, which also released an optimistic report on the prospects for offshore wind, which it found are especially bright off the eastern seaboard. The Netherlands is already realizing that potential, with this month’s opening of a 600-MW offshore wind farm that supplies enough energy for 1.5 million people.

Carbon pricing is in the air

California is considering major changes to its landmark cap-and-trade legislation, which would extend the system past 2020, return most revenues to the people through per-capita dividends, and eliminate carbon offsets, which are controversial in polluted communities because they make allowance for pollution to continue. Massachusetts and Rhode Island both have serious carbon-tax proposals before their legislatures, and a District of Columbia coalition is pushing a fee-and-rebate proposal as well. Washington Gov. Jay Inslee discussed the prospects for the carbon tax proposed this legislative session. In Canada, the federal government prepared to roll out the carbon tax that would apply to provinces which don’t adopt their own systems; it, too, would rebate a large chunk of the revenue to provincial residents in a system modeled on Alberta’s.

The assault by President Trump and the GOP on environmental protections suffered a setback last week, when the Senate voted 49-51 against overturning the Obama administration’s rules to reduce the leakage of climate-polluting methane from federal lands. Three Republican senators—Lindsay Graham (SC), Susan Collins (ME), and John McCain (AZ)—joined with Senate Democrats to block the move, which would have been the 14th rule repealed by this Congress. Meanwhile, President Trump named two fossil-friendly nominees to the Federal Energy Regulatory Commission. Once confirmed, they can break a logjam delaying $50 billion in energy projects for lack of a quorum on the commission. The Trump EPA dismissed half of the 18 academics on its Board of Scientific Counselors, leading two other members to quit in solidarity. Over at the Department of Energy, President Trump paradoxically appointed renewable energy critic Daniel Simmons to run the Office of Energy Efficiency and Renewable Energy. His desire to eliminate the Advanced Research Projects Agency-Energy (ARPA-E) will have to wait at least until next year, as the recent congressional budget compromise actually increased ARPA-E’s funding through the fiscal year that ends this fall.

Last week, Tesla began taking orders for its solar roofs, in which the PV cells are embedded in the actual roof tiles. The firm says that the installed price—approximately $42 per square foot—will be cheaper than fancy roofing materials such as terracotta tile or slate, and close to the cost of lower-end options such as asphalt shingles, even before accounting for income earned from the energy produced. Tesla enters a rooftop solar market already in a dynamic state, with large national leasing companies faltering while regional and local firms are ascendant. In India, the price of solar power at auction continues to plummet, and at 4 cents per kilowatt-hour is now 40 percent cheaper than it was just last year. The 8.8 GW of panels that India is projected to install this year will vault it into third place worldwide, surpassing Japan and trailing only China and the United States.

Coal keeps wearing out its welcome around the world

Ten aging South Korean coal plants will close temporarily next month, President Moon Jae-in ordered Monday on his fifth day in office, vowing to shutter them permanently by the end of his term in 2022. In India, the state of Uttar Pradesh cancelled contracts for nearly 4,000 GW of coal plants, on top of 29,000 GW of Indian fossil-fueled generation that were already going begging for customers. New coal plant approvals were also suspended in 29 Chinese provinces. On the US West Coast, Idaho Power asked regulators for permission to close Nevada’s last coal power station, North Valmy, in 2025, a decade ahead of schedule. Portland General Electric has backed away from its plan to replace its closing Boardman coal plant in 2020 with new gas-fired generation. In the UK, coal’s long run in the birthplace of the Industrial Revolution ended when the national grid was powered for 24 consecutive hours without any help from coal.

A spring brimming with hydropower, wind and solar has sparked creative thinking about how to rejigger the California power market so that Pacific Northwest hydro can provide peaking power, instead of relying on gas turbines that idle for hours while they’re unneeded. The California power grid may also allow gas generators to shut down for months at a time when their power is superfluous, as abundant solar energy drives market prices down so far that gas generation is uneconomical during much of the day. California’s power system faces an unusual test this August, when solar generation will plunge during a mid-morning solar eclipse and then surge when the moon shifts out of the way. Meanwhile, Southern California Edison is connecting batteries to some gas generators so they can provide instantaneous power that is almost 20 times more valuable to the grid than power ramping up from a cold start. Vermont homeowners can benefit from the same technology on a smaller scale if they lease a Tesla Powerwall backup battery from Green Mountain Power for $15 a month. The low price takes into account the utility’s ability to stabilize the grid by controlling the batteries remotely.

BC election results may scramble plans for fossil projects

A photo-finish in last week’s British Columbia elections may herald a shift in the warm welcome that the province’s center-right Liberal government has extended to new oil pipelines and gas and coal export projects. The initial cliff-hanger outcome left the Liberals one seat short of the 44 needed to form a majority government, with the New Democratic Party at 41 and the Green Party tripling their representation to three seats. In BC’s parliamentary system, these results—if they hold through the counting of absentee ballots next week—would give the Greens leverage to exact conditions for their support of a premier from either party. Climate issues may play a role, but Green leader Andrew Weaver has signaled that campaign finance and electoral system reforms are his party’s top priorities.

Image: Support, a sculpture by Lorenzo Quinn, created for the 2017 Venice Biennale. Used by permission.