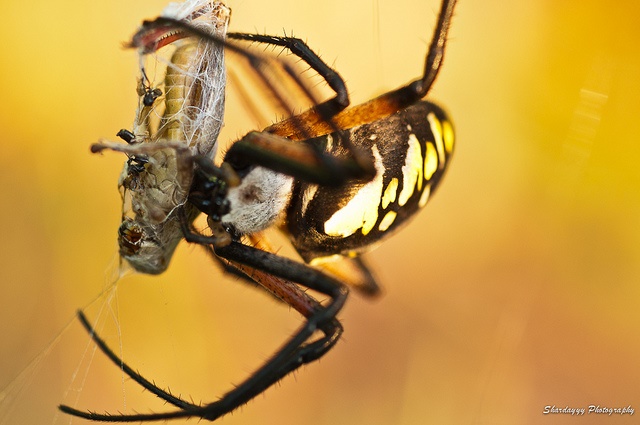 Do frightened grasshoppers increase carbon storage in grasslands?  It appears the answer is yes, according to Yale Forestry School research that shows grasslands where grasshoppers are afraid of being eaten by spiders retain more carbon. But the reason for this phenomenon might not be what you think.

The Yale team examined carbon storage in controlled settings where grasshoppers were alone, and others in which they had to contend with spiders. The researchers reported in a recent Proceedings of the National Academies of Science article that “up to 1.4-fold more carbon is retained in plant biomass when carnivores are present compared with when they are absent, owing primarily to greater carbon storage in plants and below ground plant biomass .”

The first assumption might be that when carnivores such as spiders eat herbivores such as grasshoppers, more grass grows because there are fewer insects to eat it.  However, that is not the dynamic the Yale research uncovered.  Rather, researchers found two ways that predator pressure affects prey and causes changes that radiate through ecosystems.

First, grasshoppers under stress from spider predation experience fear that leads to physiological changes that increase the ratio of carbon to nitrogen protein in their bodies. That spells less nitrogen protein in the system to feed microorganisms, so those microorganisms consume less carbon-rich organic matter.  Therefore more carbon is retained in the soil.  Plots with grasshoppers fearful of being eaten by spiders showed organic matter decomposition rates one-third those of plots without spiders.

Second, plants chewed by herbivores breathe out more carbon because their respiration rates increase. But, grasshoppers looking over their wings to make sure spiders are not sneaking up on them have less time to eat, and eat less.  So plants retain more of their carbon biomass, because their respiration goes down, plus they take up more carbon through photosynthesis.  This demonstrates how predator presence affects plant growth.

The research is part emerging field of trophic cascades, which is “the indirect effects of carnivores on plants mediated by herbivores,” the scientists write. These are “common across ecosystems,” but their effects on carbon cycles “are largely unexplored.”

“Our data highlight the influence that the mere presence of predators, as opposed to the direct consumption of herbivores, can have on carbon uptake, allocation, and retention in terrestrial ecosystems,” the researchers write.

The findings could have general application to all predator-prey relationships.

“What my research is showing is that the carnivores on top of the food chain are determining how much plant material is actually produced,” notes Yale ecologist Oswald Schmitz.

The new research underscores yet one more critical value of biodiversity.  In a world where many predator species are threatened, maintaining and restoring full ecosystems with predator populations could have significant implications for carbon storage.

A video on the Yale work can be viewed here.