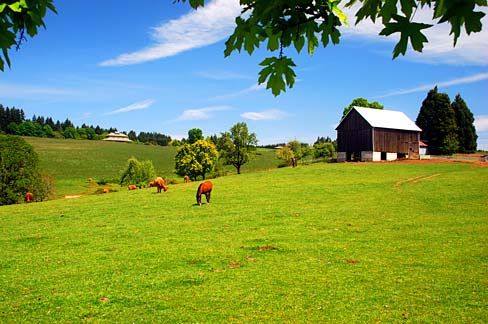 Soaking carbon from the atmosphere into farm soils is a widely advocated climate solution. A new Australian study kicks dirt all over the idea. Carbon markets would not provide sufficient incentives for farmers to build soil carbon. But digging in a little deeper uncovers a more favorable picture.

Melbourne School of Land and Environment researchers concluded that was unrealistic. In a survey published in Nature Scientific Reports on July 12 they found that applying carbon-soaking practices on Australian farms could at most add 53 million carbon tonnes to farm soils. In addition to the more limited potential, farmers also have no financial incentive to try: even at a carbon price of AU$23/tonne, farmers would lose $3 per hectare applying the practices. That plus the requirement that carbon stay in soils at least a century represents a dealbreaker, researchers asserted.

These conclusions were troubling. One of the aims of Northwest Biocarbon Initiative is building models to significantly increase farm soil biocarbon.  So I popped the link over to an advisor to the initiative and one of the smartest agricultural scientists I know, Chad Kruger, director of Washington State University’s Center for Sustaining Agriculture and Natural Resources.

“I largely agree with their findings,” but, Kruger added, you “need to dig deeper.” In arid regions such as Australia or the Columbia Basin, soil carbon accumulates relatively slowly so carbon sequestration alone cannot pay the cost of practice changes. “You have to ‘stack it’ with other benefits.”

As Kruger blogged recently in “When soil carbon sequestration REALLY pays,” what will really drive farmers to build soil carbon is “adaptation and resiliency."

The capacity of carbon-rich soils is their ability to hold moisture is one big reason. 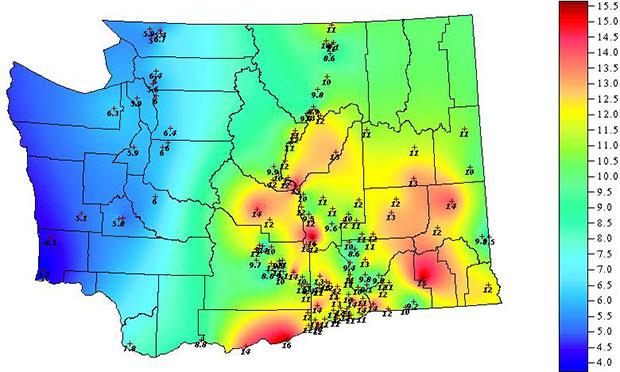 “One of the critical concerns of high temperature days during the growing season is that irrigation and precipitation rates can’t keep up with the rates of evapotranspiration (ET) leading to reductions in yields or, depending on timing, reductions in crop quality as our fragile soils dry out,” Kruger wrote. “During these really hot stretches, as you travel through the Columbia Basin you’ll notice that irrigation systems are running 24/7 on growing crops to minimize the heat-induced losses.”

In fact, much of the Columbia Basin loses the equivalent of 11-15 inches of rainfall to ET in hot months. That provides a huge incentive to build moisture-soaking soil organic matter (aka soil carbon).  Kruger cited Dale Gies, a Moses Lake, Washington potato and wheat farmer who relies on irrigation.  For over 15 years, Gies has practiced techniques such as cover cropping.  His motives are “to improve soil quality, productivity, disease resistance, and water-holding capacity.”

Gies “doubled his soil carbon from 0.6% to 1.3% (which) increased his soil water holding capacity by approximately 30% — making it possible for his soils to hold enough water to ‘weather’ the hot days when ET exceeds irrigation rates. While the value of that carbon for carbon credits or incentives might have only amounted to $50-100 (acre) over the past 15 years, the value of avoided crop loss could be equivalent to more than $100 (acre) per year!”

Farming practices that build soil carbon can reduce losses of crop yield and quality, Chad explained to me.

Building farm soil carbon represents a fortunate confluence between what farmers need to do to prepare for increased climate extremes, and what they can do to reduce the atmospheric carbon that is driving those extremes. But practice change does not happen automatically. It takes public investment in three areas:

This is the successful triple play behind most practice changes. That suggests a different pathway than the Aussie Liberals’ carbon offset credits, as well as a need for the carbon revenues they oppose.  Instead of using money for offsets requiring costly validation of carbon accumulation on specific farms, leverage farmers economic interest in resilience by investing carbon revenues in the triple play of research, extension, and cost share.

Too much carbon in the atmosphere is harming the climate. By taking that carbon out of the air and storing it in soils it can do tremendous good. Providing a policy framework that helps farmers move to carbon-soaking practices will unlock benefits for everyone.