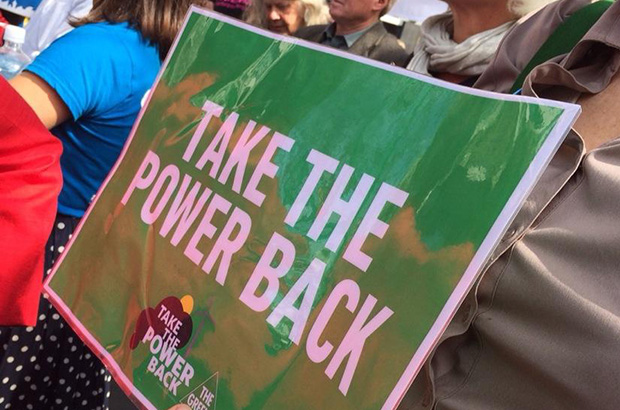 Tags
fossil fuels
“This is the end of the Fossil Fuel Era, the beginning of the Clean Energy Era.”
KC Golden
September 22, 2014

So read the hand-painted message on the back of the shirt of the student marching in front of me, one of 400,000 to throng New York City on Sunday at the People Climate March.  I knew I had come to the right place!

So, too, read the writing on the wall today, as the Rockefeller Brothers Fund announced that it would be divesting its assets, generated by the Standard Oil Company, from coal, oil, and gas.

The carbon bubble is beginning to pop.  Coal is on the ropes, and the investment managers who have been resisting divestment are now kicking themselves for staying in too long.  Oil and gas will lose their grip more slowly, but they will lose it.

Of course, we won’t stop using fossil fuels tomorrow.  Global fossil fuel use has probably not quite reached its peak.  So, was my fellow marcher – a 19 year-old community college student -- wrong, hasty, idealistic to proclaim the end of the Fossil Fuel Era?  Well, it sure isn’t going to end itself!

Historical Eras don’t just rise and ebb like tides, controlled by physics. They are built and defended.  Then they start to become obsolete, dysfunctional, and eventually intolerable.  But they pretty much always outlive their usefulness.  They are effectively “over”—their legitimacy gone and their end certain -- long before they finally let go and recede into history.

And if the White House continues to flog an “all of the above” energy policy, this transition is going to be way too damned slow.  Remember, King didn’t just soothe us with:

The arc of the moral universe is long, but it bends toward justice.

He also kicked us in the butt:

In this unfolding conundrum of life and history, there is such a thing as being too late.

“Too late” is bearing down on us now.

I don’t imagine the President will start embracing the end of the Fossil Fuel Era tomorrow at the UN (before the election), but if he doesn’t effectively do it before the Paris climate talks in late 2015, the world will miss a fateful opportunity to launch the global clean energy transition.

We’ll see what they have to say tomorrow, when 130 world leaders gather at the UN Climate Summit.

But the marchers have already said it.  The Rockefreakinfellers have said it. We all kinda know it.   The fossil fuel era is on its way out.

Thing, though – the biggest thing – is we can’t hang around observing the slow inflection. We have to get done with it fast or we’ll blow right past the “hell and high water” sign.  Yesterday, 400,000 of us took about 2 billion steps in the right direction.

How are we going to end the Fossil Fuel Era, besides proclaiming it over, you might well ask?  Center for American Progress has a good new analysis of what it would take to get there in time, focusing on the progress we need to make in the next 15 years.  Spoiler alert:   It’s a big lift, but it produces significant net jobs even as the fossil sectors decline.  And there’s nothing the least bit exotic about it.  It’s big, but we know how.