How to keep low gas prices from tanking the climate

Two factors that shape American oil consumption hit a peak mid-2014. The first garnered a lot of media attention: The average price for a gallon of regular unleaded crested at $3.67 in May 2014, wobbled through the summer, and then went into free fall, dropping by more than 40 percent to just over $2 a gallon in January 2015.

Unsurprisingly, these two phenomena are connected through the psychology of the American consumer, but sensible policies such as clean fuel and fuel economy standards can keep our psyches from having an outsized impact on the climate.

First, the impact of gas prices. Each model year presents car-buyers with a menu of models that represent a set of trade-offs between price, performance, fuel economy, and style. Assuming the public’s tastes remain relatively constant through the year, it is possible to discern how gas prices steer auto-buyers toward greater or lesser fuel economy.

By comparing the miles-per-gallon of vehicles sold in a given month with the average sold during that entire model year, and graphing those highs and lows against the gas price in that month (again, compared with the average for that model year), it is possible to tease out how much consumers’ car choices respond to fluctuations in fuel costs.

Consider the graph below: the higher the gas price (compared with the average for that year), the more Americans tended to buy fuel-sipping cars; the lower the price, the more they tended toward gas-guzzlers.

The sloping line depicts the trend of the data points; statistical analysis suggests that month-to-month changes in gas prices can explain nearly half the variation in fuel efficiency for Americans’ new vehicle purchases throughout a model year.[1] 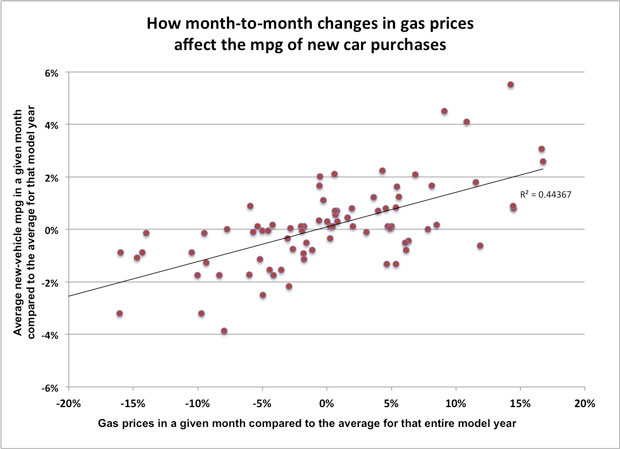 These consumer responses to the erratic swings of the gasoline market have consequences that last as long as our cars. The drop of 0.7 mpg from August to December might not sound like much—it’s less than 3 percent—but over time, a small change for that single month will add up to a lot of extra fuel consumed.

Last December, more than 1.5 million new light vehicles were sold in the United States. If those cars last an average of 150,000 miles apiece, that 0.7-mpg decline since August will result in the consumption of an additional 240 million gallons of fuel while those vehicles are still on the road. That’s two-thirds as much gasoline as the U.S. burns every day.

In other words, by the time last December’s vehicles are scrapped, a single month in the erratic price trajectory of gasoline will have led consumers to waste enough fuel to drive the entire population of King and Pierce counties across country and back, sitting four to a car in a fleet of regular Toyota Camrys.

So what does this mean for the climate? More gasoline burned means more carbon pollution in the air—unless the fuel itself has a lower carbon footprint. One way to lower the carbon intensity of fuel is through a Clean Fuel Standard, which requires refineries to produce fuel with a smaller impact on the climate, typically by blending biofuel into the stream of petroleum-based fuel.

Washington’s Department of Ecology has drafted a Clean Fuel Standard that is open for comment until March 4, and a renewal of Oregon’s Clean Fuel Standard that passed the Oregon Senate last week is headed for the lower chamber. As those standards ramp up over a period of several years,  the carbon content of motor fuel would be reduced by well over the 3 percent bump in consumption that will result from auto-buyers’ choices last December.

Clean Fuel Standards build on other regulations that have done even more to reduce the climate impact of our driving. After the oil price shocks in 1973 and 1979 spurred an initial bump in fuel economy, the Corporate Average Fuel Economy (CAFE) standards sustained those advances despite lower gas prices in the late 1980s. Then political stalemate caused the CAFE standards to plateau through the 1990s, while gas stayed cheap and consumers turned to SUVs and pick-up trucks.

The next up-tick in average mpg began in 2005, when CAFE standards began to increase for SUVs and light trucks, and simultaneously, higher gas prices drove consumers back to cars from SUVs. 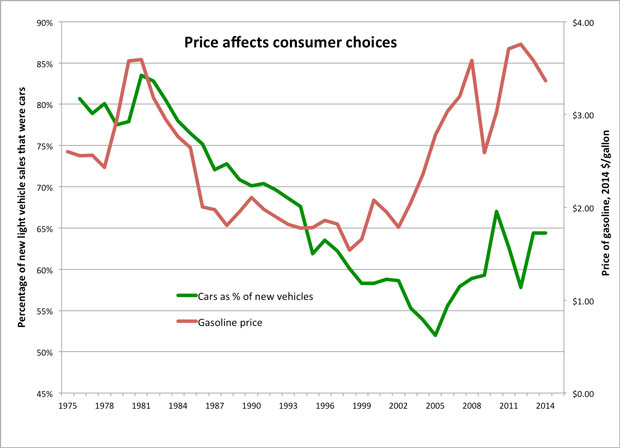 Data sources: Gas prices from US EIA Monthly Energy Review, deflated with Consumer Price Index from the Bureau of Labor Statistics. Proportion of vehicles bought that were cars from EPA Trends Report EPA-420-R-13-011.

The most recent improvement, starting in 2011, stems from an increase in the overall fuel economy of the choices presented to American consumers, thanks to the latest boost in CAFE standards negotiated under the Obama administration. Those standards are set to continue increasing until 2022, when they top out at 40 to 55 mpg, depending on the size of the vehicle—a change that will alter the menu of options presented to car-buyers, no matter the price of gas.

There are other, defter tools that can do even more to shape the factors that auto-buyers consider at the dealership. Rocky Mountain Institute has been a long-time proponent of “feebates,” which offer efficient-car buyers a rebate paid for by fees tacked onto the prices of gas-guzzling vehicles. The feebate is like a tailwind that gives consumers a little extra push toward a climate-friendly choice.

All car owners have to confront trade-offs between price, style, performance, and fuel economy, realizing that there’s no way to maximize all four of those factors. We humans tend to think the future will be a lot like the immediate present, which allows current prices to play an outsized role in shaping our choices.

That’s why solutions to the transportation piece of the climate challenge will require a variety of tools — feebates, CAFE standards, and Clean Fuel Standards — that provide steady scaffolding to keep the impacts of our new-vehicle purchases from being buffeted by short-term swings in the price of oil.

[1] Of the 84 data points available from October 2007 to September 2014, this analysis excludes one outlier, for October 2008, the first full month of the financial crisis, when gas prices were 37 percent higher than the average for that model year, and the seize-up in credit markets had dramatically slowed new-car purchases.