To create Energy Maps for communities, we use a software called e!Sankey that displays energy use and emissions in graphic similar to the US Energy Information Administration’s annual flow charts for the United States.

We like this tool for two reasons. First, it is straightforward to create. We use basic energy purchase data from local electric and natural gas utilities, as well as estimates of vehicle miles traveled from the local metropolitan planning organization. After some basic Excel spreadsheeting, we calculate and plug the energy and carbon values by source and sector into Sankey software that mimics the EIA’s national graphic.

Second, energy use is shown relatively: the boxes and flow lines are proportionally sized to reflect the relative percentages that solar and coal, for example, contribute to electricity generation. Likewise, the graphic makes visually clear how much energy the community’s residential, commercial, industrial, and transportation sectors use compared to one another, and which fuels power them. When we project this on a big screen during a community workshop, community leaders and stakeholders can see in full color which sources and sectors are their greatest liabilities—or priorities— in terms of energy and carbon reduction. 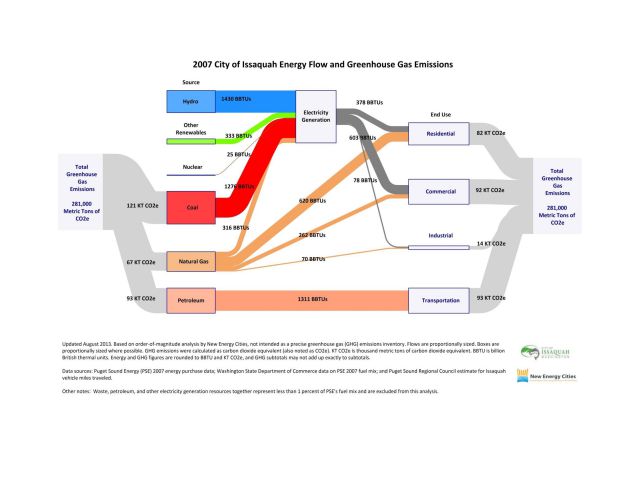 Once we have calculated and mapped a community’s energy sources and uses and related carbon emissions, we move on to doing a Carbon Wedge analysis, an adaptation of the now-famous graphic that Princeton University’s Carbon Mitigation Initiative pioneered almost ten years ago and Pembina Institute applied in Canada for the Cities of Calgary and Edmonton.

For Issaquah, which has set the goal of reducing its greenhouse gas emissions 80 percent below its 2007 level by 2050, we outlined a growth scenario of carbon emissions out to 2050 (based on projected population growth) on the same graph as its 2007 base level and its targeted 2050 reduction. Visually, the large triangular area between the growth line and the target line represents the emission reductions that the community would need to make in order to meet the target in a scenario of emissions growth. 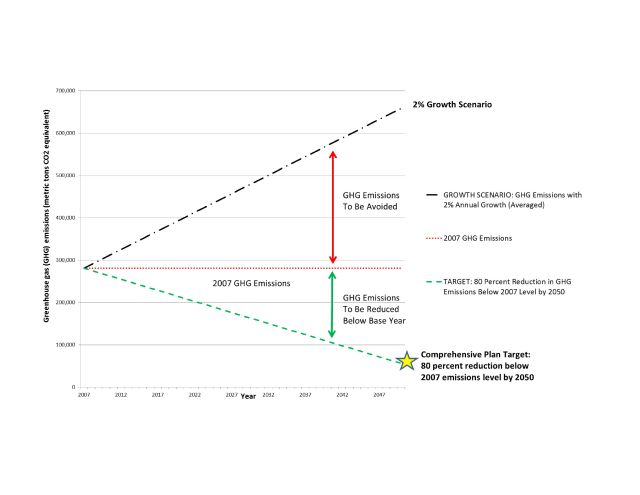 We are now working with the City to subdivide these triangles into further wedges or slices, which together represent a prospective work program or carbon reduction pathway for the community in the coming years.

Perhaps the biggest distinction of these graphics is that we portray our findings by order of magnitude—not a ton-by-ton inventory. For cities with limited resources, this work is intended to frame action based on professional local knowledge that city staff and community members already have.

This approach helps city management determine if and where deeper dives into the data are warranted—such as project-level engineering analyses that the city can commission later, once they have a sense of their top carbon reduction priorities.

The bottom line hasn’t changed: the urgency for greening our cities grows even as we lack real carbon limits and funding at the federal and state levels. In today’s financial and political landscape, in order to make informed decisions about whether and how to spend taxpayer money, communities need to use tools that maximize their decision support and minimize their costs and we have found energy mapping and carbon wedge analyses to be critically important.