Why Electric Vehicles are a Climate Solution

Imagine if you’d just joined a team designing the transportation system of the future. “I know,” says another participant. “Let’s fan out across the globe and look for deposits of a viscous, toxic substance buried deep underground, maybe offshore, or even at the edge of the Arctic ice cap. We’ll drill thousands of feet into the Earth and pump that black goo to the surface. We’ll try not to spill it, because when we do, it’ll contaminate the food chain and the water supply.

“Then we’ll ship it in oil trains that blow up from time to time, or send it halfway around the world in supertankers that occasionally wreck, and process it in refineries that pollute the air in the communities where they’re located and occasionally explode, too. We’ll take the highly flammable stuff that comes out of the refineries, and truck it to ‘gas stations’ where people will pump it into their cars.

“When the car engines burn it, the exhaust will be full of poisons, but that’s OK — we’ll put special equipment on the tailpipe of every single car to remove most of them. The one pollutant we won’t be able to remove is the stuff that screws up the climate, so the more we drive, the more we’ll overheat the planet.”

You’d wonder whether they were insane or pulling your leg. Nonetheless, that crazy vision describes the system that powers most of our transportation today, a system constructed through a century of ad hoc, incremental decisions whose ill effects are becoming clearer every day. 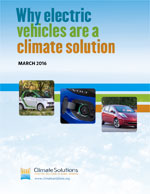 Fortunately, auto designers all over the world are developing a number of sounder alternatives to a transportation ecosystem anchored by petroleum and the internal combustion engine. Among these, electric vehicles (EVs) offer one of the most promising ways to curb the climate pollution from transportation—particularly if the power to charge them is generated renewably.

Why Electric Vehicles are a Climate Solution explores the dimensions of the climate opportunity that EVs offer, with a focus on Oregon and Washington. It reckons the additional demand for electricity that widespread adoption of EVs would require — a 6 percent increase on top of the region’s current electricity needs if half of all light-duty vehicle-miles were driven electrically. The report also examines some of the challenges and barriers that must be addressed for EVs to play a significant role in decarbonizing the Northwest’s economy. (Here “EV” refers both to cars that are completely powered by batteries, such as the Nissan Leaf, and to cars with a supplemental on-board internal-combustion engine, such as the Chevy Volt.)

The electric vehicle stands on the brink of a breakthrough in feasibility and customer appeal. Ten auto manufacturers offered an all-electric four- or five-seat vehicle to the U.S. market in the 2015 model year, up from three in 2011. The batteries powering these cars are a far cry from the half-ton of lead-acid batteries that propelled the General Motors EV-1 when it was first released in 1996. Electric cars have won praise for the quality of the driving experience they provide, as well as their efficiency and inexpensive maintenance.

Even more significantly for societal goals of clean air and a stable climate, EVs have progressed to the point where they provide an off-ramp from dependence on petroleum for personal mobility. (With the advent of electric buses, this is true for public transit as well as private automobiles.)

Given the current mix of electric generating resources on the Northwest’s grid, EVs account for only as much carbon dioxide per mile as a 94-mpg car. As coal plants retire and are replaced with lower-carbon resources, those emissions will only decline.

Adopted at scale, EVs will add a significant amount of energy storage and flexible demand to the electrical system, which will facilitate the uptake of greater quantities of wind and solar power, whose output fluctuates with weather conditions.

Making use of existing transmission and distribution infrastructure, they can attack the Northwest’s largest source of climate pollution, while requiring only a modest, manageable increase in electricity supply, and one which can be offset at least in part by increases in end-use efficiency.

EVs can provide a financial benefit to their drivers as well, because electricity as a transportation fuel is cheaper than petroleum. For these benefits of electrified transportation to be broadly shared among all segments of society, however, new policies will need to be adopted at the local and state levels. Electricity for use as a transportation fuel must be available at a reasonable price to all drivers, regardless of whether they have access to private off-street parking of their own.

Thanks to the Northwest’s natural endowment of carbon-free energy from wind, water, and sun, our electricity use is already cleaner than average, and reducing carbon pollution from driving will play an outsized role in curbing our region’s impact on the climate. Why Electric Vehicles are a Climate Solution helps explain how we can get there.