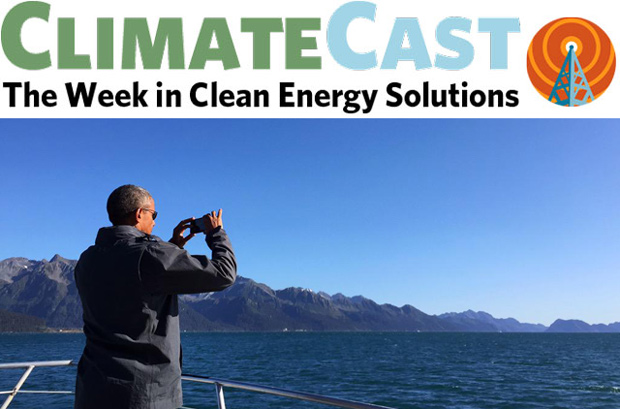 The California legislature last week voted to divest the state’s $480 billion public employee pension funds from coal, making it the first state to do so. The measure’s passage came as three other cutting-edge climate bills hung in the balance; if passed, they’d halve the state’s oil use and boost the renewable share of its electricity to 50 percent by 2030. The oil-slashing provision builds on existing policies that would accomplish most of the goal, but oil companies vigorously lobbied moderate Democrats from the economically beleaguered Central Valley, blanketing airwaves with misleading scare ads. A flurry of amendments and arm-twisting are expected until the Friday deadline for the bills’ passage.

On a visit to Alaska last week, President Obama used its backdrop of glaciers, salmon runs, and tundra villages to underscore his policy proposals to reduce climate pollution. In the northern village of Kotzebue, where he became the first sitting U.S. president to travel to Arctic Alaska, he pledged aid to communities dealing with the impacts of a warming climate, while also helping remote villages rely on clean energy instead of the oil commonly used there to generate electricity. But his eloquent words drew criticism from Climate Solutions’ KC Golden and others who highlighted the contradiction between Obama’s climate ideals and his support of new oil exploration.

Solar can thrive without tax credit, and might have to

The solar tax credit—which covers 30 percent of a system’s cost—is helpful but no longer essential to the spread of solar power, U.S. Energy Secretary Ernest Moniz said last week. His assessment comes as a tax bill in Congress would extend the wind credit but offer no help for solar, which will recede in 2017 to a 10 percent credit on commercial systems and zero for residential installations. Moniz’s optimism parallels an EU assessment predicting solar will be cost-competitive across Europe by 2030, and an IEA study which finds that renewable electricity is no longer a cost outlier. These price drops, combined with China’s commitment to carbon reduction, underlie Jonathan Chait’s upbeat summary of the prospects for climate action.

Climate impacts, from Arctic to Aleppo

Deprived of their usual blanket of insulating snow by last winter’s warm storms, North Cascades glaciers will likely lose 5 to 10 percent of their volume by summer’s end, according to a glaciologist who has studied the area for three decades. A published study ties Arctic warming to the loopy jet stream that brought frigid weather to East Asia and the eastern United States last year, while another predicts an increase in so-called “grey swan” cyclones that would swamp seaside cities such as Tampa and Dubai. In Syria, climate change likely worsened the last decade’s drought, destabilizing the regime, thus contributing to the flight of millions of refugees from their homes.

Shifting to clean energy would reduce global costs for fuel and energy infrastructure over the next quarter-century, according to a report released last month by Citibank. Even at current low oil prices, world energy costs would total $192 trillion in the “inaction” scenario, versus $190.2 trillion for the low-carbon path. Other benefits would widen that margin, says the report, finding that “the cumulative 'lost' GDP from the impacts of climate change could be significant” —an understatement reminiscent of Helen Caldicott’s 1984 pronouncement that “nuclear war is medically contraindicated.” For fossil fuel execs, the incentives point the opposite way, with carbon-intensive investments swelling their eight-figure pay packets.

Cities can save trillions, and the climate to boot

Indianapolis last week became the first American city to unleash an all-electric car-sharing fleet, transplanting a model already at work in three French cities. In Washington, DC, the two-wheeled analogue—bike-sharing—reduces traffic congestion slightly in the neighborhoods where it’s available, according to new research. Investment in smart transportation programs such as these, as well as rooftop solar, waste reduction, and building efficiency programs could save cities $17 trillion by 2050, and prevent as much climate pollution as India emits in a year, says a new report from the Global Commission on Economy and Climate.