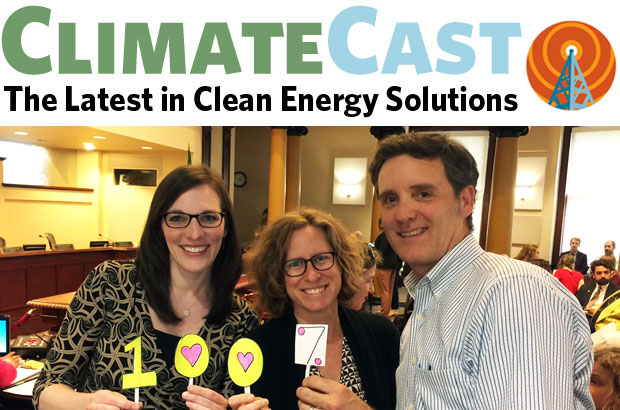 While the federal government has been embroiled in litigation around environmental rollbacks, our region moves forward towards 100% clean energy. On the same day that President Trump announced his intention to withdraw the US from the Paris Climate Agreement one year ago, the City of Portland and Multnomah County announced groundbreaking commitments to 100% clean energy. Now one year in, the resolutions are already making a real difference for our climate and communities. The resolutions have shifted major utility decisions towards renewable energy, encouraged plans to generate energy locally, and are inspiring other communities to follow suit. The city and county decisions helped Portland General Electric decide to abandon plans for a new fracked gas plant, instead choosing to pursue carbon-free resources and renewable power. Local governments are also pushing TriMet to commit to providing more frequent and affordable transit service powered by 100% clean electric buses.

On a statewide level, Oregon’s Clean Fuels Standard has already reduced more than one ton of climate pollution from the transportation sector. The Pacific Northwest is far from being the only US region working to following goals outlined in the Paris Climate Accord; 405 municipalities representing 70 million Americans are signed on to the Climate Mayors initiative, and cities and states are also pledging support Paris goals through the We Are Still In coalition. 17 governors in the US Climate Alliance have also marked the one year anniversary with a new wave of climate action, including new efforts to modernize the grid, reduce the cost of renewables, and increase energy efficiency efforts.

It’s well understood that shutting down fossil fuel plants stands to improve the health of nearby communities. But new research reveals just how quickly such closures can make a difference. In California, shuttering fossil fuel power plants resulted in an almost immediate drop in premature birth rates in pregnant women living nearby. Premature births (which can be associated with lifelong health complications) decreased by two percent just one year after fossil fuel plants closed. An annual World Bank Report on carbon pricing shows that carbon pricing is effective in reducing emissions and bolstering economies. Governments raised $33 billion in revenue last year alone from carbon pricing (a 50% increase from the year prior.) Funds raised are being used to fund climate-friendly policies that will help nations further transition to clean energy economies. At a recent summit, former Vice President Al Gore said he sees bipartisanship returning to the climate fight in the United States/ He may be right—new research out of Boston University highlights the fact that Republican mayors are increasingly embracing climate-friendly policies. While not taking action to “act on climate change” per se, Republican mayors are adopting climate-friendly policies to push forward fiscally responsible initiatives and to prioritize public health.

Reducing emissions isn’t just the right thing to do—it’s a smart economic decision. A new study from Stanford University finds that holdinging global temperature rise to one half of a degree below the Paris climate agreement two-degree Celsius target could potentially save more than $20 trillion globally—that’s three percent of the global GDP. More than three million cases of dengue fever, the world's fastest-spreading tropical disease, could also be avoided annually if if global warming is capped at that 1.5 celsius mark. New research also highlights how nations with robust global trade networks may be better prepared to withstand extreme weather shocks brought on by climate change.

EVs roll out, renewables roll on

Officials in Massachusetts and Rhode Island have given the okay for two new massive offshore wind farms, a decision that could bring significant expansion of the industry in the region. Wind onshore is expanding, too. Iowa-based MidAmerican Energy will invest $922 million in added wind-power capacity, to equal as much renewable energy as its customers use. Customers would then get 100 percent of their annual energy use from clean energy, and the company plans to freeze consumer rates for possibly up to 15 years. Despite the EPA’s current cynical efforts to roll back Obama-era clean car rules, the International Energy Agency reports that the number of electric cars increased by 57 percent last year compared with 2016, rising to 3.1 million vehicles on the road. In Europe, several utilities have announced that they will increase wind and solar farms even without any government subsidies to help fund the projects, a move that shows major renewable projects are becoming so popular, a financial boost from governments is not always needed.

Earlier official estimates stated that 64 people died in Puerto Rico following Hurricane Maria, but a new study says the number is more like 4,600—and could be significantly more. Many of these deaths are purported to have occurred because of problems gaining access to medicine or medical care. 14,000 people remain without electricity in Puerto Rico, and a new hurricane season has just begun.

A study finds that global warming hits poorest nations hardest, despite these countries being the least responsible for global emissions. Numerous climate impacts pose threats to global agriculture; beekeepers in the US reported an increase in honeybee deaths over the last year, with 40 percent of hives dying unexpectedly. Erratic weather brought on by climate change may be to blame. Global warming is also taking a toll on kids’ ability to learn in school; a study looking at 10 million US students found that hotter school days impede learning and reduce test scores.

Some of the world’s wealthiest investors are starting to sit up and take notice of climate change and how it impacts investments. Mainstream investors are increasingly recognizing both the economic threats of not acting on climate change, and the economic opportunities of transitioning to a clean energy economy. European asset manager, Amundi, believes we’re now at a tipping point, and that institutional investors views are evolving to consider climate change in their decision making. Such a prediction from Amundi is notable, considering that the company holds $1.6 trillion USD under its management, making it the largest asset manager in all of Europe.