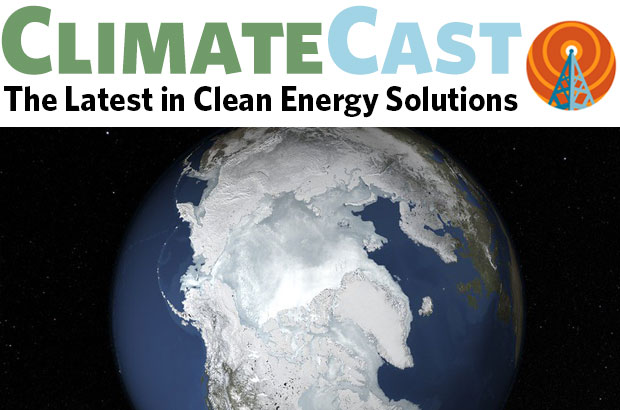 What’s it like to read climate and clean energy headlines every day? Some days, it’s inspiring. Other days, it weighs heavy on my heart. I generally review headlines every day, rather than saving them all up to prepare ClimateCast in one sitting. The one time I did that, I became so depressed about the bad news that I took my laptop to a Mexican restaurant and wrote while drowning my sorrows in bottomless tortilla chips and bean dip. It wasn’t pretty.

Bad news aside, there is still so much that makes me feel hopeful about our climate future. A quick scan of the top headlines can sure make you feel like we’re doomed, but these headlines do not provide an accurate depiction of the clean energy revolution that’s taking place. If you look at the stories buried behind the front page, in trade publications, in business and technical outlets and in international media, you’ll find shining glimmers of hope everywhere.

This past year, we’ve seen how clean energy projects are unfolding on a massive scale -- oftentimes without federal mandates to support them and despite new tariffs and other roadblocks. These headlines demonstrated not only how renewables are beginning to dominate the electricity sector, but how human ingenuity is making clean energy projects unfold in innovative, unexpected ways:

And we can’t forget about the massive increase in public support for climate action, led by youth. In September, millions took part in the largest demonstrations ever in the fight against climate change. Over 2,500 events took place in more than 163 countries on all seven continents. More than seven million people participated. The desire for climate action rose throughout the polls, with more Americans voicing support of policies to reduce climate pollution and transition to a clean energy economy. Climate change finally got some significant airtime as Democratic presidential candidates discussed their solutions at a first-of-its-kind climate crisis town hall. 10,000 U.S. farmers and ranchers came out publicly in support of a national Green New Deal.

Coal-plant closures also dominated the headlines, as global coal use saw its biggest annual fall in over four decades. US renewable energy use surpassed coal for the first time. Electric vehicle use expanded in individual states and across the globe, even outselling gas-powered cars in some countries. Financial analysts predicted that fossil-fuel car sales had peaked, and that soon, clean cars will dominate the transportation sector.

None of this is to say that there weren’t bad headlines too. From Freedom Gas, to the heartbreaking derailment of the Clean Energy Jobs bill in Oregon, the US pulling out of the Paris Climate Accord, and climate impacts that cost billions and caused untold human suffering, there were some heavy headlines this past year. But because the headlines focus so much on the negative, and psychologically our brains are hardwired to cling to the negative over the positive, I wanted to reflect on the progress we’ve seen this past year.

There is much work still to be done, but there is also much to be thankful for. There are countless engineers, researchers, policy experts, academics, non-profits, governments and activists creating progress. Innumerable individuals are quietly pushing us forward...designing innovative clean energy solutions, meeting with lawmakers to advocate for broad, systemic change, organizing grassroots action in their communities, and so much more. Of course we are not doing nearly enough. But we are doing some great things. And it’s these things that keep me moving forward, filled with hope that a clean energy future is possible, and motivated to do my part to make that future a reality -- for my own four-year old daughter, for your kids and grandkids, for all of us. Thank you for reading, and for fighting the good fight.