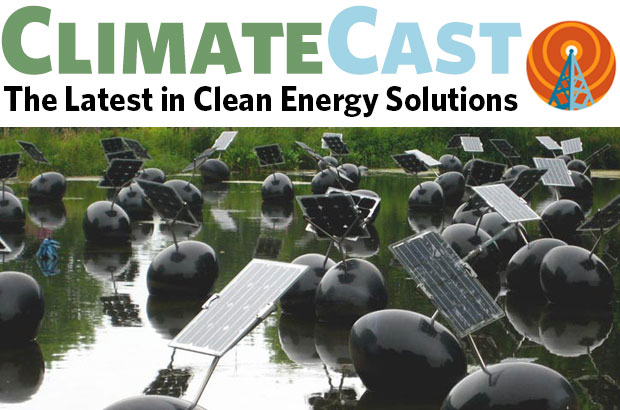 Floating solar panels may be the next big thing in renewable power In East Asia, floating solar arrays are already popular as a way to meet countries’ ambitious solar targets in places where land is limited. In the U.S., the National Renewable Energy Laboratory estimates there are 24,000 artificial lakes, ponds, and reservoirs that could host floating solar panels—with the potential to produce enough energy to power nearly 10 percent of U.S. annual electricity output. Despite the Trump Administration’s tariffs that have hampered industry growth and cost an estimated 62,000 U.S. jobs, new data shows that solar and other renewables will soon surpass coal. Due to coal’s continued collapse (more on that below), and the continued growth of solar, experts predict that renewables may surpass coal as an energy source in the U.S. as soon as 2021. Even in Texas oil country, solar is transforming the state’s energy mix. The state is is expected to double its solar electricity output next year -- and then again the year after that. On the East Coast, a new project is demonstrating that batteries aren’t the only way to store solar and wind energy when the sun isn’t shining. Maine is the site of a pilot project that converts surplus electricity from renewables into a renewable gas that can be stored in underground pipelines. Such plants are already running successfully in the states of Colorado and California, as well as Germany, Denmark and Switzerland.

In Arizona, a new electric-car manufacturing plant is expected to create nearly 5,000 direct and indirect jobs over the next decade. The company, Lucid Motors, will first produce a luxury sedan with a range of over 400 miles. In Ohio, General Motors and South Korea’s LG Chem will invest $2.3 billion to build an electric vehicle battery plant, therein creating one of the world’s largest battery facilities. The plant will help accelerate the automaker’s initiative to introduce 20 new electric vehicles globally by 2023. And while South Korea already leads the world of electric buses in use, efforts to electrify transportation in the country—and beyond—are continuing to unfold. South Korea-based Hyundai Motor will invest over $51 billion over the next five years, with a third of those funds being dedicated to electric vehicle production. This is part of the company’s ambitious plan to be among the world’s top three makers of battery and fuel cell vehicles by 2025. In British Columbia, electric vehicles now make up nine percent of all light-duty vehicles being sold in the country—that’s up from four percent in 2018. And a new analysis reveals that the world may now have passed its peak demand for gas-powered vehicles, Tailpipes may be in the rear-view mirror sooner than once thought.

It seems you can’t scan the daily headlines without seeing something about the demise of coal. Worldwide coal use is on track for its biggest annual fall on record—and that’s after four decades of practically uninterrupted growth. For the first time in three decades, India’s reliance on coal power is expected to fall this year, and, Chinese coal demand is projected to plateau. Spain-based utility, Iberdrola, has announced plans to replace its coal-fired power plants with solar and wind. The American Electric Power Co. and Southern Co. are both withdrawing from the oxymoronically-named trade association the American Coalition for Clean Coal Electricity, leaving the trade association with zero utility members. A new report shows that the number of insurers withdrawing coverage of coal projects more than doubled this year. This year is also the first time U.S. insurers have taken action, leaving European and Asian insurers as the only options for obtaining insurance. In fact, the report states that coal is on its way to becoming altogether uninsurable. Most coal projects cannot be financed, built or operated without insurance.

U.N. Secretary-General António Guterres opened the UN climate talks with a strong statement: “Ten years ago, if countries had acted on the science, they would have needed to reduce emissions by 3.3% each year. Today, we need to reduce emissions by 7.6% each year." Now talks are wrapping up, and one of the world’s leading climate scientists has warned that leaders are still not treating climate change like a global emergency. Many talks have focused on implementing the 2015 Paris Climate Accord, while the topic of how quickly the world must cut greenhouse gas emissions has received little attention. There has also been some discussion around implementing a global carbon market. Despite President Trump moving to pull the U.S. out of the Paris Climate Accord, Speaker Nancy Pelosi and Democratic Congressional Representatives attended UN climate talks to send a strong message that “we are still in.” But judging by the contents of the UN’s annual “Emissions Gap” report, the time for talking has long passed, and now we must act urgently. Currently, global temperatures are expected to rise as much as 3.2 degrees Celsius (5.8 degrees Fahrenheit) by the end of the century should we continue on our current trajectory.

Emissions are on the rise...and we’re running out of time

Even as coal declines worldwide, emissions are still on the rise. Industrial emissions are on track to rise 0.6 percent this year -- a slower pace than in previous years, but still headed in the wrong direction. In fact, this is the third year in a row that carbon-dioxide emissions from fossil fuels have increased. Fracked gas is fueling these growing emissions. The Secretary General of the World Meteorological Organization stated that “things are getting worse.” The organization’s annual State of the Global Climate report indicates that climate change has “brought the world ‘dangerously close’ to abrupt and irreversible changes, or tipping points.” A recent scientific article in Nature says that “the intervention time left for limiting global warming to less than 2C is about 30 [years] at best. The reaction time—time needed for full global decarbonisation—is at least 20 [years].” Finally, a new paper has called on regulators to take “decisive steps to ensure that the financial system can withstand climate-related shocks." The paper warns that at any time, a single catastrophic event caused by climate change could “detonate a financial bomb” that incinerates powerful companies, causing a recession on a similar scale to the 2008 financial crash.

In brief: Climate change is forcing one person from their home every two seconds, Oxfam says

A new report indicates that, over the past decade, climate-fueled disasters have forced approximately 20 million people to flee their homes annually. This new data indicates makes climate change the leading cause of displacement over the past decade. According to the report, the globe’s poorest countries are most at risk.