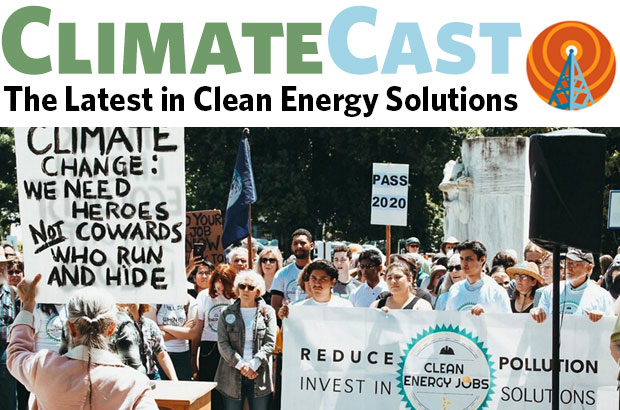 This week, the national media and people across the country are tuned in to affairs of state in Salem, Oregon as the final few days to the legislative session play out. Legislative debate over clean energy policy quickly morphed into an ugly mess, in which opponents of climate progress used threats of violence to stymie the legislative process.

As the Senate planned for its anticipated vote on the Clean Energy Jobs bill (HB2020B) last Thursday, all eleven Republicans staged a walkout—their second this year—demanding major concessions and stalling the vote by denying the Senate a quorum. Governor Kate Brown responded by ordering State Police to return the runaway lawmakers to the capitol; in comments to several reporters, Senator Brian Boquist insinuated that he would respond with violence if approached by police. Further escalating the standoff, at least one self-styled militia group pledged to provide “security” for the senators. Further threats of militia activity prompted a shutdown of the Capitol campus on Saturday

While the Governor and other prominent lawmakers blasted the Republican walkout and publicly refused to negotiate, on Tuesday morning Senate President Peter Courtney capitulated, saying that the Democratic majority lacked the votes to pass the bill (despite, advocates pointed out, evidence to the contrary). Clean Energy Jobs advocates continue to demand a vote on the bill, even after Governor Brown appeared to concede. So it appears that a small group of conservative elected officials, funded by industries generally opposed to climate action, may be able to defeat a popular clean energy bill by plainly rejecting democracy. Observers are left to worry whether this kind of maneuvering will become more commonplace.

As of press time, the runaway Republicans have yet to return, leaving the Senate in limbo. Progressive groups are still calling for the Senate to vote on the Clean Energy Jobs Act. With the end of the regular legislative session fast approaching, many bills hang in the balance along with Clean Energy Jobs. This story is developing.

When #ActOnClimate is more than just a social media trend

The State of New York passed one of the most aggressive climate policies in the world -- creating legally binding emissions reduction targets that align with the goals of the Paris climate agreement. Under the new policy, New York must source 100% of  its electricity from carbon-free sources by 2040, and reach net zero emissions by 2050. New York isn’t alone; the list of states resolving to act on climate change within their borders  is growing. Colorado Governor Jared Polis signed 11 carbon-pollution slashing bills and rolled out his plan to get the state to 100 percent renewable electricity by 2050. New Jersey and Maryland both passed legislation mandating that 50% of their electricity must be from clean energy sources by 2030. In 2019 alone, Washington, Nevada, New Mexico, and California all passed laws to eliminate greenhouse gases from their electrical systems. Corporations are also responding to climate concerns; 84 percent of business decision-makers say they are aware of the grave UN IPCC climate report issued in late 2018, with two-thirds changing their energy management strategies in response. On the other side of the pond the UK became the first major nation to set aggressive climate goals initiating plans to cut greenhouse gas emissions to almost zero by 2050.

Private enterprise and local and state governments are applying a variety of strategies to combat climate change in the face of federal inaction. Nevada reinstated net metering, allowing utilities to buy back excess energy generated by residential rooftop solar companies. As a result, Nevada installed the third-highest amount of solar in the first quarter of 2019.In Hawaii an on-bill financing program launched in April wherein participants can elect to pay the costs for home energy efficiency or solar upgrades via a line-item charge on their monthly electric utility bills, significantly decreasing up-front costs for these upgrades. In Milwaukie, Oregon, an apartment complex just finished installing a 400-kilowatt solar project, generating enough electricity to power 38 homes. The project is part of the Milkwaukie’s commitment to reduce emissions. Beyond traditional renewable energy efforts, Oregon State University is finalizing plans for the largest wave energy testing facility in the United States off the Oregon Coast at Newport Bay. Two-sided panels may prove to be a workaround for the solar industry  to address Trump administration import tariffs, which only include single-sided panels. So far the tariffs have had a limited impact on the U.S. solar industry; a new report says that the first quarter of 2019 was the strongest in the U.S. solar industry’s history.

A new fleet of over 100 eco-friendly recycling, compost, and garbage trucks is taking to the streets in Seattle. The fleet will run on electrical energy, renewable natural biogas emitted from landfill trash decay, and diesel sources like vegetable oil, soybean oil, and animal tallow. Tacoma, Washington has unveiled a new program to replace diesel school buses with all-electric ones. At the same time, the State of Washington will distribute $13.3 million among six transit agencies for the purchase of 50 zero-emission electric buses. A similar electric school and transit bus pilot program is being started in the state of Vermont; the effort is being funded by monies from the Volkswagen Environmental Mitigation Trust (EMT).

First of the summer’s record-setting heat

Two recent temperature readings, one in the Middle East, the other in South Asia, achieved the distinction of hottest places on Earth. The thermometer hit 129 degrees in Mitribah, Kuwait in 2016, and 128.7 degrees in Turbat, Pakistan in 2017. The World Meteorological Organization looked at the data and deemed these readings as some of the hottest temperatures ever recorded on the planet. Heatwaves continue to cause severe impacts with the second-longest heatwave on record claiming the lives of 184 in people the eastern Indian state of Bihar. Still early in the Northern Hemisphere’s summer season, temperatures have soared past 100 degrees in portions of California. In order to avoid system-wide brownouts, Californians have been advised to limit power consumption after 4 p.m. each day. Ironically, dramatic temperature swings and extreme weather have led to an increased use of fossil fuels. as people use more heat or air conditioning to try to escape temperature extremes. The biggest offenders? China, India and the US.

The Environmental Protection Agency announced a rollback on Obama-era emissions regulations in an effort to prop up the ailing coal industry. The EPA’s efforts may be inconsequential, as even without federal regulation, the U.S. power sector is already on track to achieve much smaller emissions. Canadian Prime Minister Justin Trudeau is supporting the 620-mile Trans Mountain pipeline expansion to carry petroleum from oil sands, which creates some of the dirtiest fossil fuel emissions. Trudeau rationalized the plan by saying monies raised from it will be used to develop alternative energy sources. Research indicates the pipeline will increase risk of oil spill by 800 percent, due to the increased tanker traffic through Boundary Pass and Haro Strait, the narrow waterways separating the San Juan Islands and Vancouver Island. More than 700 major corporations are failing to reveal the full extent of their environmental impacts on the climate crisis, water shortages and deforestation. The list of companies includes some of the world’s largest companies, fossil fuel and retail giants alike. . And a scientific study in the Canadian Arctic determined that the thawing of permafrost is occurring 70 years earlier than originally predicted. ho should pay for these devastating changes? A survey by Yale University’s Program on Climate Change Communications reveals that 57% of Americans think that it’s large polluters who should pay.