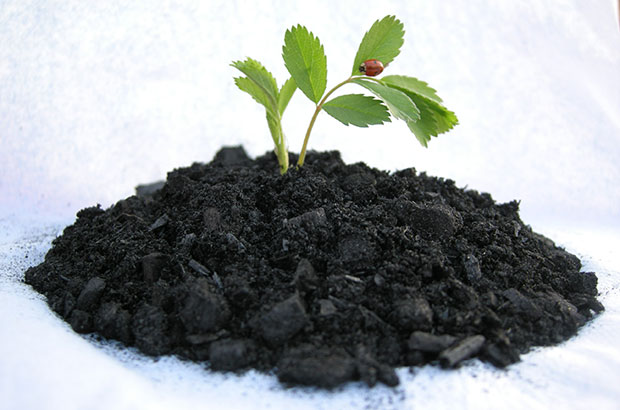 Tags
biochar
Inspired by the carbon-rich soils of Amazonia
Patrick Mazza
May 15, 2012

Biochar has had an interesting run over the past several years. As with so many other emerging climate solutions, biochar burst into public awareness a few years back with a wave of grassroots enthusiasm.

New understanding of the carbon-rich terra prieta soils of Amazonia built over millennia by indigenous people inspired a modern movement. Growing plants could snag carbon from the air. Transforming plant matter into biochar and using it as a soil amendment could store that carbon for hundreds if not thousands of years. A path to actually reducing atmospheric carbon presented itself.

Then came the backlash. Producing biochar also yields bioenergy products. Biofuels opponents claimed growing biomass for biochar operations would conflict with food production and cause tropical forest cutting. The critiques were in many ways over the top. Biochar proponents have typically focused on waste streams that do not compete with food or cause logging. But they did help spur the International Biochar Initiative to take the first steps to develop sustainability standards. Standards defining biochars safe for use in the soil have just been approved. The commencement of a global, public process to develop sustainability guidelines for biochar production is expected to kick off soon.

"The International Biochar Initiative (May 9) announced final publication of the first international Biochar Standards after a two-week open ballot by IBI Membership. The IBI Biochar Standards are the result of a multi-year development process that was global, transparent, and inclusive, and that involved the input and participation of hundreds of research scientists, entrepreneurs, farmers and other stakeholders in the drafting, review and approval of the document.

The full document title is: Standardized Product Definition and Product Testing Guidelines for Biochar That Is Used in Soil. It is available on the IBI website and may be freely distributed and used for non-commercial purposes under a Creative Commons copyright license.

IBI began the process of establishing the Biochar Standards in May 2009 as a critical first step for the commercialization of sustainable biochar systems. Deployment of sustainable biochar systems at all scales can help solve the global food security crisis and the global climate change crisis by enhancing soil fertility, avoiding greenhouse gas emissions and sequestering stable carbon in soils. For a sustainable biochar industry to succeed, it must provide certainty to consumers and markets about biochar and its safe use as a soil amendment. The Biochar Standards provide the tools needed to universally and consistently define what biochar is, and to confirm that a product intended for sale or use as biochar possesses the necessary characteristics for safe use.

The Biochar Standards also provide common reporting requirements for biochar that will aid researchers in their ongoing efforts to link specific functions of biochar to its beneficial soil and crop impacts.

The Biochar Standards establish the definition of biochar as, “a solid material obtained from thermochemical conversion of biomass in an oxygen-limited environment.” Biochar is made from waste biomass, and reduces emissions from biomass that would otherwise naturally degrade to greenhouse gasses.  The thermochemical conversion process converts a portion of the biomass into a stable form of carbon that acts as a greenhouse gas sink.

The Biochar Standards establish the essential characteristics of biochar as a soil amendment, and designate the tests used to measure these properties. These properties include carbon content, carbon stability, total ash, and pH, for instance, all of which are important to soil health and fertility. The Biochar Standards also grade biochar according to its carbon content: Class 1 biochar contains 60% carbon or more; Class 2 biochar has between 30% and 60% carbon; and Class 3 biochar has between 10% and 30% carbon.

Complete background and development information on the Biochar Standards is found on the IBI website.

IBI is currently developing an IBI Biochar Certification program that will allow producers to officially label their biochar with an IBI logo as having met the requirements of the Biochar Standards. IBI believes that a program to certify biochar according to the Biochar Standards will further develop the biochar industry."