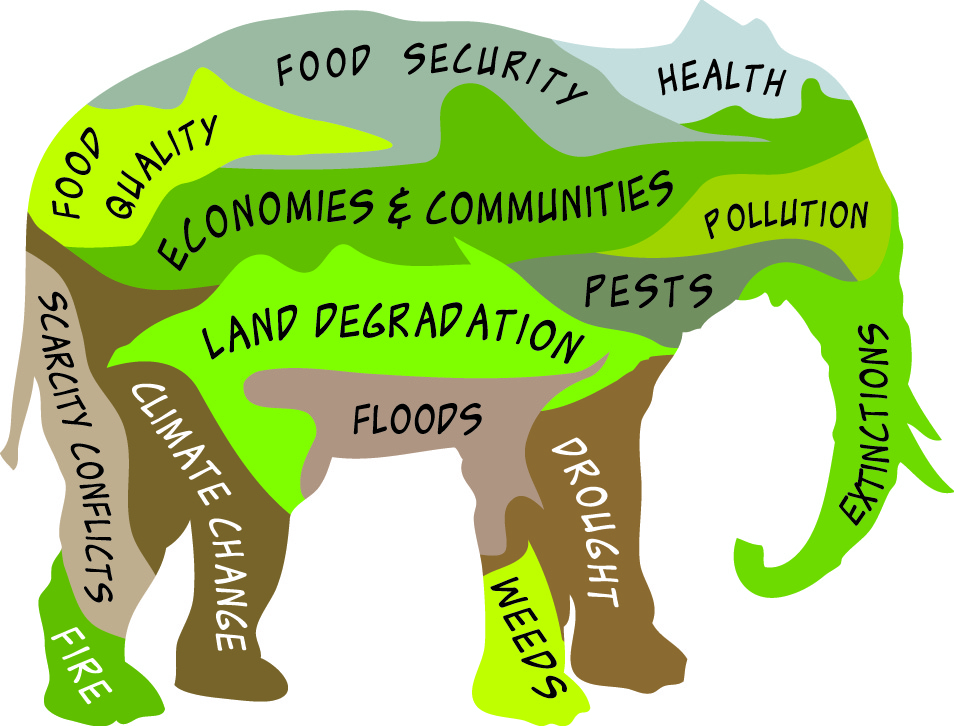 Sitting down to talk about his work to focus the climate-saving power of soil carbon, Peter Donovan starts off with a trick question.

“What’s the major greenhouse gas?”  I fall right into it. “Carbon dioxide.”

Of course, he’s right, and I know it.  I have answered the question I thought I heard – What is the human-emitted pollutant that is the largest source of climate change?  But in terms of actual gases in the atmosphere, good old H2O is hands down the greatest heat trapper.

The persistent drought covering much of North America’s food growing land over past months brings the carbon-water connection to the fore.  When it remains hot and dry over long periods, water evaporates from soils, and that creates a feedback loop which makes it even hotter.  The poorer soils are in terms of organic content, the quicker the water goes.  Standard agricultural practices promote just this result.

“Our food mostly comes from ground that is bare most of the year,” Peter notes.  To illustrate the point we go over to my computer and he calls up Google Earth Engine.  Remote sensing imagery of croplands shows a lot of yellows and brown and not so much green.

Peter’s answer is the Soil Carbon Challenge, a “competition to see how fast land managers can turn atmospheric carbon into soil organic matter.”  The basic approach is empirical, as the contest text underscores:  “If you want to find out how fast a human can run 100 meters, do you build a computer model, do a literature search, or convene a panel of experts on human physiology to make a prediction? No, you run a race. Or a series of them.”

Here the race is taking place among 60 landowners on nearly 150 plots of land scattered from Massachusetts to California and Saskatchewan to Mexico.  A great Google map-based database on these and other monitoring projects is here.  The Challenge is based on the realization that human management can make a big difference in soil carbon, and that these changes are easier to measure than has been commonly supposed. The approach employs permanent plots that can be repeatedly monitored with field sampling and laboratory analysis of carbon content. Monitoring is done almost entirely by Peter himself.  This past March he returned to his Wallowa County, Oregon home base after a continent-wide 12,000-mile monitoring journey in the school bus that doubles as his home.

The Challenge is seeking out what Peter describes as “positive deviants.” The term originates in a theory that sees change in communities coming not from outside, but led by examples of success within communities, those who deviate from the norm in a positive direction.  The Challenge aims to document and recognize soil carbon success to encourage replication.

Peter reflects the best in citizen science. With a full head of gray hair, and a hardened face that reflects his past life as a rancher, Peter has educated himself on soils science by reading literally hundreds of papers.  And he has found critical gaps in knowledge, originating in the fact that many monitoring projects only run several years.  It takes at least four years to develop a good baseline, and the Soil Carbon Challenge will run a decade, to around 2020, before winners are named.

His ranching background brought Peter to the Challenge.  He has been involved in the holistic range management movement led by Allan Savory.  Also known as active grazing management, this series of practices moves herds across the landscape in a systematic way, rather than letting them move around on their own overgrazing pasture lands.  The result is improved forage growth.  Most of the Challenge participants come from the holistic ranching network.  There are indications these practices do build soil carbon in deep root structure, perhaps to an even greater extent than annual row cropping. But the jury remains out.  Developing a long enough baseline to validate carbon accumulation on grazing lands is crucial.

Farmers and ranchers have a bottom-line interest in building soil carbon because it reduces the need for costly inputs to enhance fertility, Peter notes.  And they are “receptive to the idea of building water in the soil.”  But because of variations in soils, climate and other conditions, developing generalized knowledge on carbon accumulation is notoriously difficult.  That is why local knowledge and examples of success are critical.