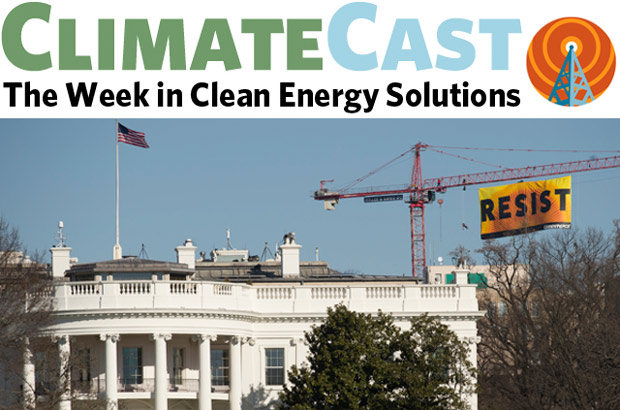 Dear readers: We are asking you for your feedback on our summary of the week’s top climate and clean energy news. Please take our 2-minute survey here.

Resistance to Trump ferments from within

Some federal social media accounts took on the flavor of samizdat last week, as the Badlands National Park Twitter account posted a string of tweets on climate change, carbon dioxide, and ocean acidification, and at least two other Park Service accounts followed suit. Although most of these tweets were soon deleted, the episode led to the creation of a host of “rogue” Twitter accounts claiming to post on behalf of the agency’s true mission, in the environmental field and beyond. The covert dissent demonstrates the difficulty of taking over agencies staffed by civil servants who have their own deeply held policy ideas, although the Trump transition team is making every effort to rein them in, and has scientists worried about how long-standing research might be curtailed. This American Life goes inside DOE to talk with two staffers: one who decided to do battle from within, and another who couldn’t stomach the thought.

Sunshot achieves its goal of $1 per watt solar

The price of utility-scale solar power dropped this year below $1 per watt DC, reaching the US Department of Energy’s Sunshot goal three years ahead of schedule. When the goal was set in 2011, PV installations cost about $4 per watt. With an assist from these low prices, 2016 was the third year in a row when the majority of new US generating capacity was renewable, with the DOE estimating that 63 percent of new power connected to the grid comes from sun and wind. Taking a global view, British oil giant BP released its annual energy outlook last week, predicting for the first time that world coal demand will peak between 2030 and 2035. BP projects slowing growth in oil consumption, but doesn’t forecast a major blow from EVs, which it believes will comprise just 6 percent of the global auto fleet in 2035.

The utilities of the future

California’s three private utilities requested $1 billion in ratepayer funding for a massive expansion of electric-vehicle charging in the Golden State. Not only would additional EV infrastructure help the state meet its goal of cutting climate pollution 40 percent by 2030, scaling up the electric fleet will also help utilities open a market for EV owners to provide services that help the grid absorb more renewable power. Two Hawaiian utilities are so eager for more EVs that they are offering a $10,000 incentive to Leaf buyers, on top of the $7,500 federal credit, cutting the net price of the car below $14,000. It’s the kind of innovation that could pay off for the power company under a new proposal in the Hawaii legislature that would tie utility rates to performance, instead of capital investment. Meanwhile, a new University of Chicago study shows that the parts of the US with deregulated, organized power markets save $3 billion a year compared to what they’d spend under old-style regulated utilities, thanks to the dispatch of lowest-cost power.

The first full week of the new administration led to a serious case of policy whiplash, as President Trump signed orders that put the Keystone XL and Dakota Access pipelines back in play, although they don’t grant final federal approval to either project. At the EPA, a freeze on new grants and contracts was imposed and then lifted at least partially by the end of the week. Meanwhile, nominated EPA head Scott Pruitt is stonewalling requests to release 3,000 pieces of correspondence between his office and fossil fuel firms over the last four years. Fellow nominees Rick Perry (Energy Secretary) and Ryan Zinke (Interior Secretary) face a vote on their nominations Tuesday in the Senate Energy and Natural Resources Committee, a vote that was delayed for a week with no explanation. But the most alarming change cuts across many agencies: a plan for political appointees to review the work that scientists present and publish, which erodes the Age of Enlightenment idea that policy is based at least in part on empirical facts and knowledge.

A new bill to price carbon pollution in Washington state was introduced last week in the state legislature. The bill—HB 1646 by Rep. Joe Fitzgibbon (D-Burien)—would charge $15 per metric ton for CO2 emissions, a fee that would rise faster than inflation until Washington meets its goals for cutting climate pollution. Revenue from the measure would be invested in clean energy, forest health, and in cushioning the impacts of climate change and energy taxes for the most vulnerable parts of the population—a framework adopted last year by the broad-based Alliance for Jobs and Clean Energy. A competing carbon tax included in Gov. Jay Inslee’s budget came under scrutiny last week from utility consultant Jim Lazar, who points out that it exempts the Centralia coal plant, potentially making its carbon-intensive coal power cheaper than natural-gas power in certain market conditions.

US infrastructure bill could pump billions into grid

Noted energy efficiency pioneer and physicist Arthur Rosenfeld died last week at the age of 90. Once his attention was drawn to energy conservation in the mid-’70s, he spearheaded efforts to reduce energy consumption and avoid the need for new power plants through appliance efficiency standards and energy-frugal building codes. He served in state and federal government and is beautifully memorialized here by three of his former students.