[note: Shayleen Macy delivered this statement at a public hearing this week in Seattle, as the federal Bureau of Land Management considers reforming a decades-old leasing program allowing coal companies subsidized access to mine coal from public lands.]

My name is Shayleen Macy, and I am a member of the Confederated Tribes of Warm Springs. I am Wasco and my tribe is from the Columbia River. For my people, salmon and the water are sacred, and we depend on them culturally, spiritually, traditionally. That is why I have traveled here from the Warm Springs Indian Reservation in Oregon today, to let you know that I oppose coal extraction and export project expansion, and to urge you to move towards sustainable energy sources that won’t negatively impact salmon fisheries and contribute to global climate change.

I am a fisher on the Columbia River; I fish for traditional, subsistence and commercial purposes. Traditional fishing for salmon, trout, lamprey and sturgeon is a practice by the Columbia River and Coastal Tribes that dates back for millennia. For the Warm Springs Tribes, these rights to continue these practices are guaranteed by federal government treaties; yet these very rights have been threatened and harmed by fossil fuels exports and consumption.

Coal export projects are having a negative impact on our fishing rights and traditions. Coal traffic poses both a physical threat to our people on the river and an environmental threat. For example, fishermen have been hit and killed by rail traffic. Also, fishermen and their families live at campsites provided by the US Army Corps of Engineers, which are mostly placed adjacent to the rail lines—within as few as one to fifty yards from the trains on the river banks in Oregon and Washington for over 100 miles. The toxic coal dust blowing off of coal trains is toxic and inhalable. These hazardous circumstances need to be addressed, as they are an injustice to our people. We have tried again and again to communicate with the Army Corps, and yet we remain largely neglected, while continuously impacted by these issues.

We as a people are fighting for our rights to continue our fishing practices. Our fish are dying by the thousands. Last year, hundreds of thousands of sockeye salmon were killed in the middle of their run due to high water temperatures, and we know that an entire run of salmon can be killed in one hot season. We have already lost an entire species of salmon on the Columbia to extinction. Water acidity from coal falling directly into the river from trains also kills salmon, by impacting their food chain.

In addition to the salmon, our people have seen detriment from other impacts of climate change. The huckleberry, for example, a wonderfully nutritious and delicious indigenous food, is sacred, but it is also endangered. Last year we saw our huckleberries’ harvest time come an astonishing one month early. This year, even scarier, about two months earlier. We live in fear that in our lifetimes, we will see the extinction of some of our first foods.

We see these changes because we are part of the natural environment traditionally, culturally, and spiritually. Our practices are passed down generation to generation. We have people out interacting with the environment every day of the year, and we see what is going on. It’s not an abstract idea that we just talk about. It’s right there, it’s a part of our life, it’s right there just like the coal trains.

I urge you to leave fossil fuels in the ground, to realize and accept that we must move away from burning fossil fuels to save the environment and ourselves. Please give my people and our First Foods a break. Give the salmon and the huckleberries a break. No coal exports. No coal project expansions. We can do better. Thank you. 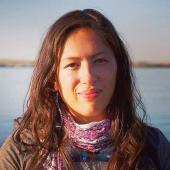 Shayleen Macy is a Tribal Member of the Confederated Tribes of Warm Springs in Oregon, and a graduate of the University of Oregon with a Bachelor of Fine Art in Printmaking and a minor in Business. Shayleen is an organizer with the Power Past Coal coalition. She has studied over five Native languages and has used her skills to teach Tribal languages in her community, as well as staying engaged as an environmental activist and a vocal supporter of economic and education development in her hometown.