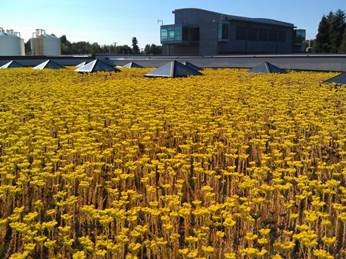 Bringing Nature into Cities Is Good for You and the Planet
Jenna Garmon
February 18, 2014

Urban nature is good for you and the planet.

That’s the takeaway from a recent gathering at Portland State University, focused on the multitude of benefits from urban nature. Several Northwest Biocarbon Initiative partners were among other researchers and practitioners gathered at the Urban Ecology and Conservation Symposium on Feb. 10.

The 12th annual event was hosted by the Urban Ecosystem Research Consortium of Portland/Vancouver (UERC), a network of people interested in advancing the science and improving our understanding of urban ecosystems. Similar to the Northwest Biocarbon Initiative, one of UERC’s functions is to share information and make connections across communities, organizations, and sectors.

Participants braved icy roads to pack the house for a fast-paced, full day that included two keynotes and several speed talks on topics ranging from conservation tools to public perceptions of nature. A decidedly Pacific Northwest event, timekeepers used duck calls to alert speakers that their time was up, and a raffle featured beautiful gifts handmade by the speakers.

Keynote speaker and geomorphology expert David Montgomery (University of Washington) kicked off the event, describing how soil restoration can address the key challenges of the 21st century, including climate change. He covered some of the same information in his presentation at the Northwest Biocarbon Summit last year (video, presentation, and guest blog).

Montgomery noted that soil serves as a major carbon sink, storing three times more carbon than in all of the world’s plants and two times more than the atmosphere ― a huge biocarbon opportunity. Adding organic material such as compost and biochar to the soil not only sequesters carbon, but has the added advantage of using waste material to create non-petroleum-derived soil amendments.

With more than half of humanity now living in cities, can we rebuild soils and green our infrastructure in urban areas? Montgomery answered a resounding yes, and pointed to the public health benefits that can be realized by restoring urban soil, like better access to fresh food. His conclusion: healthy soil is our secret weapon and we can no longer afford to treat soil like dirt.

Biophilic Cities ― Healthy for the Body, the Mind, and the Climate

The second keynote speaker, Professor Tim Beatley, chair of the University of Virginia’s Department of Urban and Environmental Planning and Teresa Heinz Professor of Sustainable Communities, spoke about connecting with nature and adapting to climate change in cities. Beatley provided an inspiring overview of the Biophilic Cities Project, launched in October 2013 with Portland and eight other partner cities. A “biophilic” city has abundant nature and seeks to protect and grow this nature and foster human connection to it. Conservationist E.O. Wilson, who popularized the term, defined biophilia as “the innately emotional affiliation of human beings to other living organisms. Innate means hereditary and hence part of ultimate human nature.”

In addition to the climate benefits from nature in cities—such as storing carbon and mitigating the urban heat island effect—Beatley highlighted research demonstrating the positive effects of nature on mental health. He described Japanese research on “forest bathing,” which found that walking in the forest reduces stress hormones and boosts immune systems, including cells that fight cancer. He also referred to a University of Pennsylvania study that found that greening vacant lots in Philadelphia made residents feel significantly safer.

Biophilic cities not only reap health, environmental, and climate benefits, but also realize economic savings.  A benefits analysis for the Houston Bayou Greenway Initiative, which will add 4,000 acres of green space, found that, “there is unlikely to be any other investment in the greater Houston area that will have a significant impact on the City’s quality of place, transform its park system, contribute to the health of Houstonians and the natural environment, and reposition the City for the 21st century,” noting that the analysis excluded many of the project’s benefits that cannot be measured in dollars.

In one of the rapid fire speed talks, Tom Liptan, a green roof pioneer formerly with Portland’s Bureau of Environmental Services, discussed the many virtues of red cinder and sedum ecoroofs. Sedums can thrive among the red cinder mineral mulch with little to no irrigation, resulting in a low cost, low maintenance green roof with many benefits besides managing stormwater, including carbon storage, reduced heat gain, water conservation, lower water and sewer bills, and increased native flora and fauna.

This is just a slice of what was presented at this inspiring gathering. To learn more, visit the UERC website where you can sign up for their listserv and read the conference proceedings.