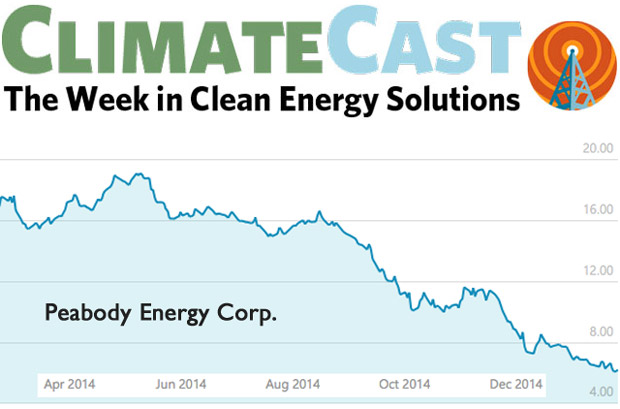 Oil’s price collapse echoed through capitals and corporate reports last week. Consumers’ gratitude for low gas prices counterpointed the cutbacks facing oil-exporting countries such as Venezuela and Mexico; the pinch felt by petro-states Louisiana and North Dakota; and leaner times in the Alberta tar sands. Exxon Mobil, Occidental, and Conoco Phillips all reported weak results, and smaller producers were desperate for cash to sustain a debt load that has burgeoned by $1.2 trillion for the sector over the last five years. With oil profits more dependent on refining than ever, the United Steelworkers struck for better working conditions at nine refineries that account for 10 percent of the country’s capacity.

New data released last week showed 2014 was a banner year for clean power, as record photovoltaic installations nearly doubled solar capacity in the UK to 5 GW, and Germany installed more onshore wind power than ever before, helping it stay on track with its transition to renewables known as Energiewende. A new EU report showed the global scope of the rise of renewables, with China and other nations outdistancing the EU at solar installations since 2013. Cheap oil won’t disrupt this trend, federal statisticians and industry analysts said last week, thanks to policies that help stay the course and because so little oil is used to generate electricity.

Enthusiasm for new wind farms off the Massachusetts coast was scarce last week, when half the leases offered drew no bids, and others sold for much less than previous tracts. Developers may have been scared off by the faltering Cape Wind project off Cape Cod, though a new analysis blames its failure on developers’ missteps, not the project’s offshore location. The terrestrial U.S. wind business, boosted by the on-again, off-again Production Tax Credit, had a banner year in 2014. But the credit’s extension went down by a non-binding Senate vote of 47-51 last week, so the 12.7 GW already under construction may be the last to benefit from it.

A Washington bill that would cap carbon pollution got its first hearing last week in Olympia, bolstered by hundreds of supporters who rallied under the banner of the newly formed Alliance for Jobs and Clean Energy. Opponents fulfilled predictions of how industry would try to fight the bill by raising the specter of its price tag, while ignoring the costs of inaction. Across the Columbia, lawmakers in Salem floated a bill to transition off coal power and geared up for the first hearing on an extension of Oregon’s still-unimplemented Low Carbon Fuel Standard, while businesses digested the results of a state-commissioned study of a possible carbon tax.

Devil in details of poll that finds support for climate action

A new poll by Stanford University and The New York Times finds 74 percent of Americans back government action to curb global warming, with 48 percent of Republican respondents more willing to vote for candidates who support fighting climate change and 67 percent of Americans less inclined to vote for candidates who say climate change is a “hoax.” Peeling back the top-line results, one finds significantly less support across the board for actions that would get a grip on climate, e.g., increasing taxes to encourage less energy use, and also evidence of strong Republican unwillingness to definitively commit to addressing climate change.

Demand for coal easing around the world

America’s largest coal producer by sales, Peabody Energy Corp, posted its fifth straight loss and cut its quarterly dividend to less than 1 cent a share, its lowest since 2001. Peabody shares are down 63 percent since last year. While Peabody’s economic woes were caused by low natural gas prices that diminished demand for coal in the US, major coal-producing Shanxi province in northern China decided not to approve any new coal production until 2020 in an attempt to ease oversupply of coal. As of November, more than 70 percent of China’s coal companies were unprofitable.

Manufacturing liquid fuels from food crops couldn’t make a sustainable and significant contribution to world energy demand, according to research released last week by the World Resources Institute. But biofuels advocates called the report a red herring, pointing out that the author is a long-time critic of biofuels, and that rising demand for corn as a fuel feedstock has actually coincided with falling grain prices. Neither response, however, mentioned a key point: the brightest long-term prospects for biofuels rely on non-food crops that would not displace food production.

Volcanoes, intense storms may be tied to global warming

An increase in Iceland’s volcanic eruptions may be linked to glacial melting, researchers reported last week, as the island’s surface has been uplifting at an annual rate of 1.4 inches now that it supports less ice. Other research published last week suggests that global warming will intensify strong storms while vitiating weaker ones, leading to greater weather extremes. Yet the impacts are apt to be distributed unequally, as measurements already show different U.S. regions warming unevenly: the Pacific Northwest is warming the most during the autumn, in contrast to the bulk of the country, where the temperature has risen more during the winters.

If you ever thought you knew how to solve the world’s challenges of climate, food, and energy, the UK Department of Energy and Climate Change can offer a more productive way to while away spare internet hours than watching cute cat videos. Its Global Calculator shows how different scenarios of energy efficiency, population growth, land use, and other factors will affect humanity’s prospects of keeping global warming to 2 degrees C or less. The good news is that it is possible; the daunting news is that it won’t be easy.

On the Climate Solutions blog: Kristen Sheeran marks the start of Oregon’s 2015 Legislature with a rundown of priority climate and clean energy bills. Joelle Robinson calls for comments and participants in the Oil Transportation Safety Act hearing, while Alex Epstein, inspired by the more than 240 Washingtonians who showed up to support Governor Jay Inslee’s climate agenda, instructs readers on how to engage with legislators and advocate for climate action. Kat Plimpton reports on a University of Washington forum on carbon pricing.