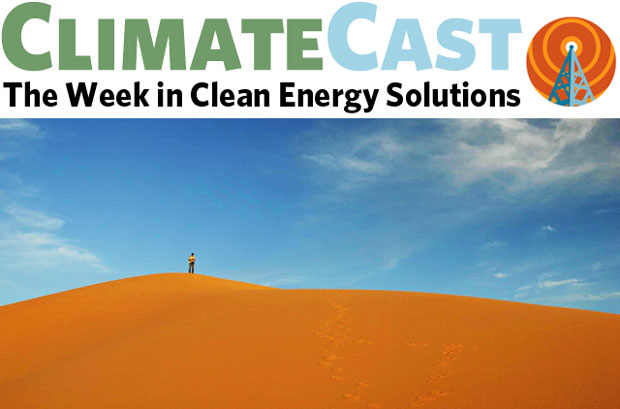 China is halting work on 30 partly built coal-fired power plants totaling 17 GW, marking the first time it has abandoned coal plants that are already under construction. Another 30 plants, including 10 for which ground has already been broken, will have a hard time selling their power because the transmission lines linking them with coastal cities have been cancelled. This renunciation of coal is especially significant in light of last week’s report from Energy Transition Advisors that India and China’s planned coal plants would use up the world’s carbon budget through 2050. In India, 24 GW of thermal plants in various stages of construction are at risk of losing their financing or their markets, representing nearly half the coal plants being built there. Access to capital is an issue for clean energy development, too: in Chile, solar projects are having a hard time getting financing because of bankers’ concerns that they’ve promised to sell their power too cheaply.

Wiki-leaked emails from campaign adviser John Podesta reveal that Hillary Clinton thought about backing a carbon fee-and-rebate plan, but the campaign rejected it after learning that it polled poorly. Climate plays a major role in the 25,000 purported Podesta emails, with 1,200 mentioning it, nearly as many as the 1,400 that refer to Bernie Sanders. The documents show that Podesta backs the goal of getting to near-zero-carbon energy by mid-century, but they also portray a candidate who supports fracking “under the right circumstances” and who, in an address to building-trades unionists, dismissed advocates of a fossil-free future as needing to “get a life.”

Labels aren’t all they seem when it comes to solar

Florida solar advocates expressed outrage last week after an official from a utility-funded think tank in Florida was heard in leaked audio recommending solar-friendly ballot language as an attractive wrapper for policies actually make rooftop solar less feasible. This deceptive strategy mirrors Amendment 1 on next month’s Florida ballot, which reiterates an existing right to install solar panels on rooftops, but also would ban net metering by prohibiting non-solar ratepayers from funding any subsidy to solar owners. Polling suggests the amendment has created the intended level of confusion, with 66 percent of voters saying they will back it. Florida’s voter rolls include a large contingent of Latino voters—a constituency that tends overwhelmingly to support climate action when not being hoodwinked by ballot subterfuge.

Global warming’s impact on small-scale farming could consign as many as 122 million more people to extreme poverty worldwide, especially in sub-Saharan Africa, says a UN report released last week. Climate change has already accelerated desertification in northwestern China, where the desert is spreading at a rate of 1,300 square miles annually—a process captured with vivid drone footage in this New York Times piece. In the US, a heat wave broke numerous temperature records last week, and King Tides caused widespread flooding in Miami, particularly in low-income neighborhoods—a phenomenon that one local meteorologist believes needs to be discussed more fully in the media. Meanwhile, Florida Sen. Marco Rubio dismissed the rationale for reducing climate pollution, saying it couldn’t be linked clearly enough to the avoidance of sea level rise.

Utility commissions face pressures to subsidize baseload generation in some states where electricity is brokered through “organized markets,” according to a new report, and have even considered returning Ohio to the traditional model of vertically integrated electric utilities to keep obsolete power plants on line. But other analysts suggest that “baseload” is becoming less necessary as renewables make a growing contribution. For instance, one Texas utility is aiming for 70 percent wind and solar power by 2019 and will use a natural-gas generator to cover those hours when clean energy falls short. In Germany, GE is building a system that will include 1.6 million gallons of pumped-hydro water storage in the base of a hilltop wind turbine, which can flow into a lower reservoir to generate power when the wind dies down.

World oil production will begin to decline in the 2020s thanks to the growing use of electric vehicles, the head of Norwegian oil giant Statoil predicted last week before an audience of industry executives at the Oil and Money conference in London. Looking at the broader world economy, the London-based Fitch rating agency warned last week that better EV batteries could destabilize world bond markets, eroding the credit-worthiness of oil companies and sorting auto companies into winners and losers. Petroleum, auto, and utility companies account for a quarter of the $3.4 trillion in outstanding corporate bonds. Looking through an even wider lens, the recently retired head of UK bank regulation cautioned Monday that climate change could trigger a new financial crisis, as mitigation and adaptation lead to a “system-wide repricing of assets happening quite suddenly.”

A new accessible approach to telling the story of climate change comes from renowned climate scientist Michael Mann and Washington Post editorial cartoonist Tom Toles. Entitled The Madhouse Effect, it uses satire and humor to make an end-run around readers’ preconceptions of the issue and open their minds to climate science. In Australia, fossil fuel interests took an entirely different approach: following a windstorm that led to a power outage across South Australia, they attempted to pin the blame on the state’s enthusiastic use of windpower. Turns out (thanks, Buzzfeed) they hired someone to amplify their messaging with a small army of fake Twitter followers, using false names and stock photos for their profile pics. Busted!

Image: A dune in the Gobi desert dwarfs a single human. Photo by PnP!, via Flickr.