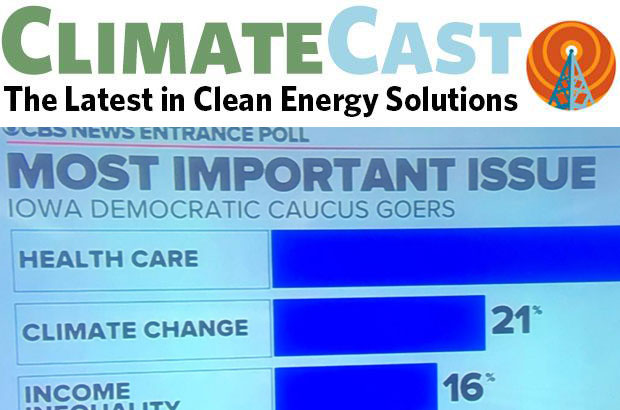 One clear and immediate result from Iowa: Climate Change is a top issue

Public concern about global warming has been on the rise—sometimes slowly—for years. Climate is near the top of the list of voter concerns, according to polling of this week’s Iowa presidential caucuses. The Washington Post reports that “more than one in five Iowa caucus-goers said climate change mattered the most to them when deciding whom to support,” Iowa voters aren’t that different from the rest of us in this regard; CBS polling found that 78% of Democratic voters in early primary states see climate change as “very important” in the upcoming election.

Imagine driving on roads with nothing but electric vehicles? Utilities already are

Electrical utility managers are deep into planning for the increasing shift of transportation from fossil fuel to electric, especially in the transportation sector. With California, Oregon and other states growing incentives for vehicle fleets and individual drivers to go electric, utilities are making plans for the charging infrastructure that will be required everywhere, as well as future demands on the power grid, incorporating new battery technology safely, and figuring out how to encourage drivers and fleets to charge at predictable times. Meanwhile, manufacturers were courting consumers this week via Superbowl advertisements for electric Hummers and Audis, proclaiming that they’re ready to “let it go” when it comes to fossil fuels.

From Berkeley to Boston: electrification accelerates

The movement to electrify just about everything--including buildings and transportation--is building momentum. What began in California in 2018 is picking up speed as cities nationwide are experimenting with different ways to incentivize or mandate all-electric construction in new buildings and renovations. While some builders and real estate developers are resisting these changes, others are working on their own to reduce the carbon footprint of their portfolios. Builders like Seattle’s Green Canopy are betting that once you've tried an induction stove, you won't miss that carbon-emitting gas range.

As Oregon’s State Legislature launched its 2020 session this Monday, clean energy topped the list of priorities for action. The Clean Energy Jobs bill was defeated last year by a dramatic walkout by Republican lawmakers; some of whom have threatened a repeat of that tactic. This year, large businesses including Nike and Microsoft are stepping up to voice their support for state-level climate action in the Northwest; they join a host of smaller businesses that advocated for Clean Energy Jobs last year.

Fisheries workers along the Northwest coast have already been raising alarms about the effect of ocean acidification on oyster beds, and researchers have warned that climate change may pose a threat to a range of shellfish populations--and to other marine life that rely on them as a food source. Now for the first time NOAA-funded research in Oregon shows that acidification is harming Dungeness crabs, threatening an industry that brings $75 million into Oregon’s economy annually, and $200 million along the West Coast.

Climate change was a big theme at the World Economic Forum meetings in Davos last month, where a the trend towards environmental, social, and governance (ESG) strategies continues to grow. With big banks, investment firms, and global business reporting they are increasingly paying attention to the financial risks of climate factors, individuals can also look at how their personal investments can contribute to positive change.

It’s a big step, but asking your financial advisor about climate-focused investments, such as traditional companies with decarbonization goals or new technology companies working in renewable energy or water quality, is a great start.