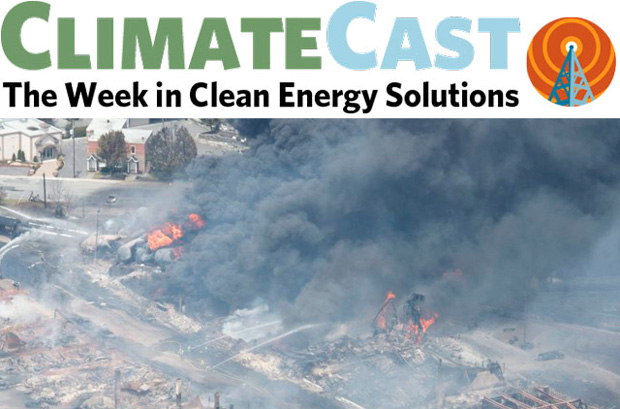 ClimateCast readers – Can you spare two minutes for our reader survey? Click here​.

EPA leader Gina McCarthy signaled last week that her agency may slow the timeline for utilities to trim the carbon pollution they create. Her comments came as several coal-dependent states geared up to hamstring the EPA’s Clean Power rule, and a utility body released a study claiming the rule will reduce the grid’s reliability—findings that were swiftly challenged by competing research. In Illinois, a bill was introduced with bipartisan support to raise the state’s Renewable Portfolio Standard to 35 percent and auction permits for carbon pollution from power generation, plowing the revenue into further pollution reductions—the predominant use of cap-and-trade revenues worldwide.

A fight is brewing in the Washington Legislature over access to the state’s rooftop solar market, with competing bills offering different incentives for homeowners who install photovoltaics and diverging on whether to open the state to solar leasing companies, whose efforts have been instrumental in the rapid spread of rooftop panels elsewhere in the West. The other key to solar power’s growth has been net metering, which benefits all utility customers in Missouri, according to a new study, and has drawn diverse defenders, including the Christian Coalition, in states where it has come under fire.

Utility regulation must advance with technology and the times

Utility proposals for a fixed charge regardless of energy consumption—intended to extract a minimum of revenue from rooftop solar homeowners who slash their bills through net metering—will ultimately hurt power companies and their customers, according to two regulatory experts. In California, San Diego Gas and Electric garnered funding for a 100-percent renewably powered microgrid for the desert town of Borrego Springs, which would feed the larger grid most of the time, but be able to operate independently if necessary. SDG&E’s embrace of this innovation is a result of what Grist’s David Roberts is calling for more broadly—regulation that aligns utility profits with clean energy.

Citigroup grabbed headlines last week with its commitment to catalyze $100 billion in projects that address climate change and protect the environment. Citi’s announcement came amid other news of capital flows to the clean-energy sector, including Deutsche Bank’s bid to boost its stake in “green bonds” to 1 billion euros, a $2 billion U.S. Department of Energy initiative to attract private investment to clean-energy start-ups, and a plan by Lawrence Berkeley Laboratory to invest licensing royalties in an incubator for clean energy businesses. In New York, a $100 million energy efficiency loan program will enable contractors to offer financing as part of their retrofit proposals.

A train hauling crude oil erupted in a massive conflagration in West Virginia last week, while four oil spills were publicly reported in North Dakota (although local media reported 28 actual spills). An enormous explosion at an ExxonMobil oil refinery injured three workers and dusted nearby Torrance, CA with white ash, a stark example of safety issues that prompted a 23-day-old oil refinery worker strike, which widened when negotiations failed to produce agreement. Meanwhile, a federal study predicts that oil trains will derail an average of 10 times a year over the next two decades. Interesting timing for the world’s largest PR firm to drop Big Oil as a client.

The Climate Investigations Center released documents and emails revealing that Wei-Hock Soon, a scientist regularly cited by climate change deniers to block action on global warming, received more than $1.2 million from oil and coal companies, the American Petroleum Institute, and the Koch brothers over the past 14 years. Soon, whose research claims that global warming is largely caused by variations in the sun’s energy and who refers to his papers as  “deliverables” in emails to his fossil fuel funders, may have violated the ethics guidelines of the journals that published his work when he failed to disclose corporate contributions tied to specific papers.

A new electric car to be unveiled at next month’s Geneva auto show will circumvent EVs’ long recharging times by using a flow battery that can be refilled with fresh, pre-charged liquid. Tesla CEO Elon Musk enlivened an otherwise disappointing earnings call with his announcement that his EV firm is several months away from producing a home-sized battery that could be used to store rooftop-generated electricity—a strategy already being tested on some solarized Walmart stores using Tesla battery packs. On a smaller scale, solar-plus-storage will be crucial to electrifying millions of off-grid rural homes in India, according to a study coauthored by Goldman Sachs.

On the Climate Solutions blog: Ross Macfarlane describes how a clean fuels standard will requires lifecycle carbon emission measurement for biofuels to ensure that energy sources with the lowest carbon footprints will receive greater support and uncovers desperation in coal company plans to export coal through Northwest ports; KC Golden called the question on the Port of Seattle’s decision to sign a lease that would give Shell Oil a homeport lease for its Arctic drilling fleet; and Joelle Robinson calls for action to oppose a Washington State transportation package that would provide $85 million for a rail project tied to coal export.