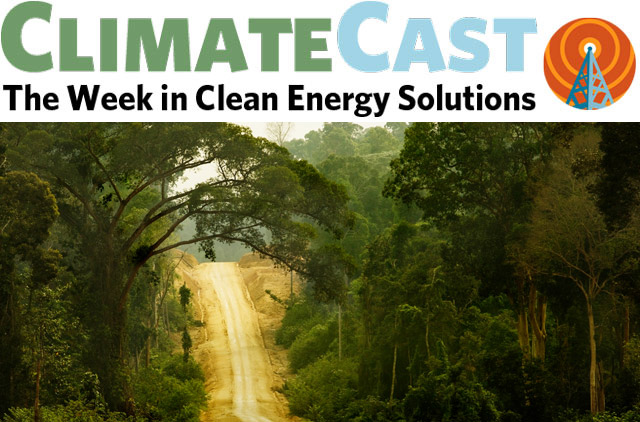 Shifting world electricity production to renewable sources would reduce air pollution and require a manageable quantity of raw materials, according to a peer-reviewed life-cycle assessment published last week. Such a transition would save $1.8 trillion over the next two decades, says a study by the Climate Policy Initiative, which also found that governments and taxpayers will bear the greatest financial risk if fossil fuel reserves are stranded underground. This research follows a pair of studies by the International Energy Agency foreseeing that solar power—in a combination of photovoltaic and solar thermal plants—could supply more than a quarter of the world’s electricity by 2050.

You can take it to the bank (once it passes, that is)

A carbon tax could pay a decades-long dividend of at least $1 to $2 billion a year toward the Washington state budget, according to new modeling released this week by Sightline Institute. As emissions declined, the tax rate per ton would increase to keep wringing carbon out of the state’s economy, though the exact price needed would depend on complementary policies to help Washingtonians transition away from fossil fuels. The carbon-tax solution was also touted last week by panelists at the University of Chicago, who invoked video clips of free-market patron saint Milton Friedman in support of a price on carbon.

Climate change threatens U.S. security, according to a Pentagon report released this week. Droughts and flooding will cause food insecurity and mass migration, destabilizing the geopolitical situation, while American military installations face impacts from sea level rise. Ironically, the report was announced by Defense Secretary Chuck Hagel, who helped block the Kyoto treaty when he represented Nebraska in the Senate. Meanwhile, a U.N. report predicted $1 trillion in annual damage from ocean acidification if carbon pollution is not curbed, and the Antarctic ice pack appears to have grown this year partly because fresh water from melting glaciers has raised the freezing point of the near-shore Southern Ocean.

Biological carbon storage in vegetation, soils, trees, and aquatic areas got a boost from the White House, the private sector, and the American Forest Foundation, which announced programs to make natural systems more resilient to climate change, aid plants in capturing carbon, and incorporate natural systems into infrastructure design. Forests play a critical role in carbon sequestration, but that role can be undermined if the forest is broken into smaller tracts. In the Brazilian rainforest, scientists found that the forest edge stores as much as one-fifth less carbon than the forest interior, adding to the case for maintaining the forest’s integrity.

The tussle over prices in a decentralized electricity market continued last week, as David Roberts deconstructed the arcane world of demand response, in which utilities pay customers to cut their power use during times of peak demand. A federal court threw out a rule that establishes a favorable rate for these “negawatts.” Controversy continued over net metering, too, although the utilities that want to charge solar homeowners for back-up power aren’t so quick to pony up the full value of solar-generated peak-hour kilowatts. Regardless of the contention, SolarCity diversified from its trademark solar lease program and offered homeowners loans to purchase their power systems themselves.

Show us the money for climate response, say African nations

African nations and government ministers from Brazil, India, China, and South Africa vow to delay any new climate agreement unless the Green Climate Fund reaches its kick-off target of $10 billion before December’s Lima summit. The fund—aimed at helping poor countries invest in clean energy—has raised just $2.3 billion, led by pledges of about $1 billion each from France and Germany, and no U.S. commitment at all. Developing nations have added little carbon dioxide to the atmosphere, as this interactive animation demonstrates. The fund meets this week to iron out its policies ahead of a “pledging summit” in November.

The U.S. shale oil boom is becoming its own worst enemy, say industry analysts, who see the supply glut pushing the price of oil so low it may become uneconomical to pry petroleum from those tight rock formations. Nor is the phenomenon limited to the U.S.—The Economist sees the prospects for new oil projects slipping around the world. While Canadians attempt to bypass the stalled Keystone XL pipeline by completing a new conduit from Alberta to New Brunswick, they may find their position increasingly marginalized: the Canadian-born governor of the Bank of England declared last week that most oil reserves are unburnable because of climate considerations.

Michael Shellenberger and Ted Nordhaus, whose Death of Environmentalism article kicked up a fuss in 2004, were at it again with an op-ed arguing that more energy-efficient technologies result in increases in energy use. The NRDC roundly criticized the authors’ “fuzzy” and unsubstantiated assertions, citing numerous counter examples of the so-called “rebound” effect and the range of energy-efficient techniques that are resulting in less illumination and energy use, not more, while Think Progress dug into the reports cited to find the conclusions were neither what the authors presented, nor as definitive as suggested.

On the Climate Solutions blog: a new generation of young organizers fueled last month’s People’s Climate March in New York, says acting field director Alex Epstein as he retells his encounters on the streets of Manhattan with comrades in the environmental movement. From the Portland office, Bobby Hayden reprises the season’s developments in the Beaver State, including a burgeoning list of signatories on the Oregon Business Climate Declaration and the rejection of plans to build a coal dock on the Columbia at the Port of Morrow.