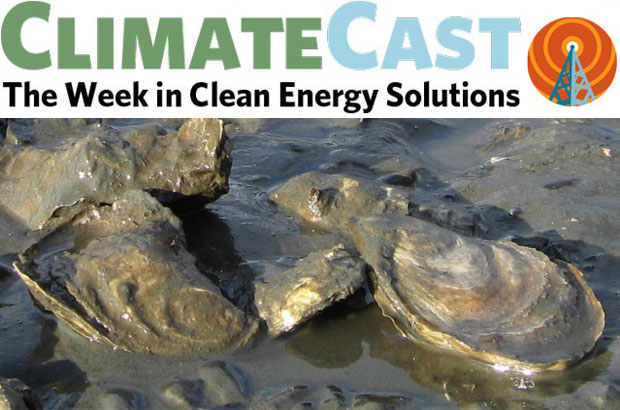 Oregon’s Department of State Lands rejected a crucial permit for a coal export terminal at the Port of Morrow, where more than 8 million tons of coal per year would have arrived by train and been loaded onto barges to connect with ocean-going ships further down the Columbia River. The denial follows a torrent of public opposition, in which over 20,000 citizens urged Gov. John Kitzhaber to nix the permit. Just two coal export proposals for Oregon and Washington still survive, out of six that were in the pipeline in 2010.

Vermont’s Green Mountain Power broke ground last week on a microgrid in the town of Rutland that will combine photovoltaic power with 4 megawatts of battery storage, so that solar electricity will be available round the clock. The 2-megawatt array will provide enough power for 2,000 homes on a sunny day, and can also operate separately from the regional power grid in the event of emergency; the batteries will also provide peaking power to the grid at times of high demand. The project is being built on a decommissioned landfill, avoiding the type of land-use controversy that has plagued other large solar projects in the area.

Carbon offsets are helping reforest a key wildlife area in southern Kenya and providing much-needed income for subsistence farmers. Looking to shrink their net carbon footprints, Microsoft, Barclays Bank, and other investors paid to protect and plant trees. The project employs 350 people directly, supports 10,000 others through sustainable local industries such as tree nurseries, and enhances habitat for more than 50 species of large animals, including elephants, cheetah, and lions. In Australia, a program that pays ranchers to leave forests intact instead of clearing them for pasture has spurred investment in rural areas, but faces an uncertain fate after the repeal of that country’s carbon tax.

New York’s energy czar is setting up a $1 billion “green bank” to stimulate investment in renewable energy. Rather than providing all the funds for a project, the bank will fill gaps where private capital fears to tread. For instance, it may help public agencies stretch out the term of a solar-panel loan, or guarantee solar lease payments by homeowners with less-than-perfect credit. The bank can also “securitize” solar loans: bundle them into large enough packages to interest institutional investors. Although that might sound like an echo of the 2008 financial crisis, these investments are economically sound.

Is it worth chasing Republican support for climate action?

Environmental Defense Fund’s campaign affiliate provoked a flurry of head-scratching when it dropped a quarter-million dollars on ads to help re-elect a New York GOP congressman. The group is rewarding him for his pro-climate votes, even though his Democratic opponent has a better overall environmental record. Meanwhile, Bloomberg News interviewed dozens of Republican pols who support climate action in private, but can’t come out of the closet for fear of alienating Tea Party elements. That fear doesn’t hold in San Diego, where the GOP challenger and Democratic incumbent in the 52nd Congressional District both back climate-friendly policies—though environmentalists question the Republican’s commitment on the issue.

Electric vehicles race ahead, hydrogen still has a chance

The number of plug-in electric vehicles on the road has nearly doubled since last July, reaching nearly a quarter of a million according to figures released last week by the Electric Drive Transportation Association. Electric vehicles are more popular than hybrids were when hybrids had been on the market for the same amount of time. The other main zero-tailpipe-emissions technology, hydrogen-fueled vehicles, may yet catch up to plug-in EVs if refueling infrastructure is expanded, says a new study from the University of California at Davis because fuel-cell vehicles offer a longer range and quicker refueling.

Maine convened a commission last week—the first state-level body of its kind—on the causes and effects of ocean acidification, which is affecting sea creatures’ ability to build their shells. On the other side of the continent, two U.S. senators proposed finer-grain research into the problem. Sens. Maria Cantwell (D-WA) and Mark Begich (D-AK) called for the U.S. to develop a national strategy on the issue and to monitor the acidity of seawater so that aquaculturists can protect vulnerable juveniles from especially acute episodes of acidity.

Rosy and jaundiced views of our climate prospects

In Foreign Affairs, former White House adviser Pete Ogden puts the most optimistic spin imaginable on the failure to reach a solid accord in Copenhagen in 2009, and pins his hopes on the rest of the world seeing President Obama’s executive orders as evidence of U.S. commitment to climate action. In counterpoint, Royal Dutch Shell’s chief climate adviser rattles off ten reasons it will be hard to corral global warming to under 2 degrees C, especially because so much energy infrastructure is long-lived, and because the problem lies in the accumulation of CO2 in the air, even if emissions eventually decline to zero.

Two activists who used a lobster boat last year to block a ship from delivering coal to a Massachusetts power plant will get the chance to convince a jury that their actions were justified to avoid greater harm. Political protestors are usually prevented from using this “defense of necessity” in court; for instance, Tim Christopher, who disrupted the auction of fossil fuel drilling leases on public lands, was barred by his trial judge from making that argument. But when the trial of these Massachusetts activists begins next month, the urgency of climate action will get a day in court.